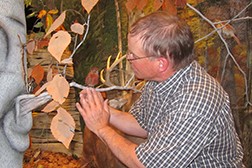 Mike places a red crossbill in the display. Submitted photo.

Anyone who has been to the Door County Historical Museum has surely admired the spectacular specimens at rest in the museum’s “Seasons of Life” exhibit, a four seasons-diorama featuring a life-sized beech tree and more than 100 native species of Wisconsin.

On July 18, museum-goers will have the chance to see master taxidermist Mike Orthober (the man responsible for the display) hard at work preparing another specimen for the museum.

Orthober is well known in the taxidermy field, having won many national and international awards, most recently a “Best In World” award for his warm water fish and “Second In World” for a non-game bird. Along with mounting specimens, he also judges taxidermy championships and teaches others his methods.

Peninsula Pulse writer Madeleine Lebovic recently caught up with Door County’s premier taxidermist for the scoop on his life.

Madeleine Lebovic (ML): What led you to become a taxidermist?

Mike Orthober (MO): I had an interest in animals and artwork when I was a kid – I’d work on model airplanes and go hunting. Both my dad and grandfather hunted.

ML: So would you say that hunting and taxidermy are related?

MO: There certainly wouldn’t be much work in taxidermy if it weren’t for hunting!

MO: The word itself tells you: taxi is “to move or arrange” and dermy is “skin.” I take the skin off of the carcasses to clean and preserve it. After making a mannequin of the body, I rearrange the skin to put it back on. Then, I apply paint because the skin loses color as it ages. For some of the animals I have to make reproduction parts. For instance, I’m working on a salmon now and the head is very oily: something that wouldn’t keep well. The whole process is like one big science project – you dissect and create.

ML: Tell me more about the exhibit to which you contribute at the museum.

MO: I was asked to do a wildlife exhibit at the museum a long time ago – nobody seemed to know that much about taxidermy at the time. I was contacted again after a while and it’s taken seven years to get to where it is now. At the end of the building is a wildlife diorama with a mural and complete habitat. I worked on all of the animals – there are about 140 birds, but with male and female pairs maybe 100 species, a skunk, deer, bear, one fish, a couple reptiles… but I also built the beech tree, molded each of the leaves, and cast rocks for the stone fence.

ML: Is there a creature you’d especially like to work on but haven’t gotten the chance yet?

MO: I like birds. They can fly, walk, some can swim and dive – really incredible creatures. Normally in the shop I do game birds because songbirds are protected. You can’t decide to put this bird here and the other there because I only work on those that come in. It’s neat to have the chance to work on them (songbirds) when dead ones are found.

ML: What was the most difficult animal you’ve worked on?

MO: A pair of hummingbirds – the body is hardly bigger than a pea.

ML: What would you say to those interested in taxidermy as a profession?

MO: Taxidermy can be very fulfilling. You can never learn everything about the animals you’re working on but it gives you a chance to learn about their anatomy, habits, and environments because you often incorporate them into your work. It’s not like painting pictures where you can make copies to sell and make money – you get one chance and it’s very labor intensive. You’ll never get rich doing it, but then again, I wouldn’t be doing it unless I loved it.

MO: Most people have no idea what taxidermy is and their immediate thought is, ‘Yuck.’ But it’s not what most media makes it into! It’s really a combination of biology and artwork into a final product. I’d recommend taking the chance to check it out because it really is interesting.

Orthober will demonstrate his techniques at the Door County Historical Museum, 18 N. 4th Ave., on Saturday, July 18 as he prepares a specimen for the museum’s permanent wildlife diorama, “Seasons of Life.” Another demonstration will be held Aug. 22.