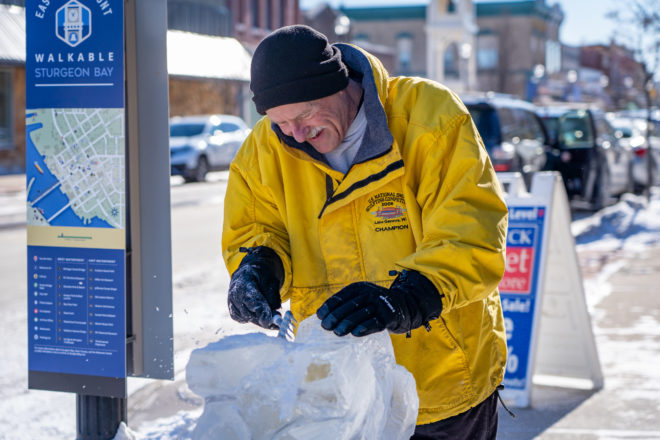 Not that long ago, Collin Richter of Sturgeon Bay was new to ice carving, but for years, his father, Gary, had participated in carving events throughout Wisconsin.

“My dad suggested I give it a try,” Richter said. “Our family enjoys getting involved in street art and events whenever we get an opportunity.”

Richter started with a wallpaper scraper and found that “it cuts the ice like butter,” he said.

Cameryn Ehlers-Kwaterski, executive director of Destination Sturgeon Bay, said that one of her favorite activities during the annual Fire & Ice event is meeting the ice carvers who line city streets with beautiful sculptures that they create in a matter of hours.

“Watching both the novice and professional carvers turn their blocks of ice into finished sculptures is truly amazing,” she said.

Part of that is discovering the methods carvers use to shape their blocks.

Sculptor Jamie Doeren of Abrams, author of Chainsaw Carving a Bear: A Complete Step-by-Step Guide, is skilled in a variety of media and has ideas about other household tools that come in handy when transforming frozen water into a work of art, including wood chisels of various widths.

“You can cut through the ice really nice with those,” Doeren said. “Doing it by hand takes a little bit longer, but it makes a nice finish.”

One household item that might not immediately come to mind is an iron, which can be used to create edges.

“Ice is like a diamond,” Doeren said. “You want more facets to capture the light. You don’t want to round everything; you want clean edges.”

Now that you have a few cool tool tips, what should you carve? How about a full-scale version of Stonehenge? That’s an interesting idea, but there might not be enough ice. According to Rachel Malcore, marketing coordinator at Destination Sturgeon Bay, carvers begin with a 40″ x 20″ x 10″ block.

Beginning carvers should start simple, Doeren said, and avoid shapes with arms, legs or wings that stick out and might break off the block.

“I’ve seen people do a snowman,” he said. “Keep the arms in; keep them close. Work on the finer details, like where the coal pieces would go, and make them deep enough so they stand out.”

If (or perhaps when) something doesn’t go as planned, that iron you took along might save the day. Doeren acknowledges that carving repair is a bit more advanced, but a beginner can often reattach a horizontal break if it’s cold enough.

“You take the iron and create two flat spots, drizzle some water on it, and it will freeze back together,” he said. “Just hold it for a while, and be patient.”

“You can put the pattern on both sides,” Doeren said. “That works really nice.”

Or, cut the parchment paper to the final shape of your design, and stick that to the block. Either way, you’ll be off to a good start.

Richter reminds those who have never carved before that ice is a fun medium to work with, and you get to meet great people at events such as this one.

“My favorite part is talking with people passing by and watching them try to guess what I’m carving,” he said. “Everyone has an imaginative idea. The build-up is the best part, and I like getting to know the community face to face.”

At any ice-carving event, weather plays an important role. Too warm, and the ice can be soft, making it more challenging to create defined shapes. Too cold, and the ice gets brittle and may crack easily. Doeren offers these pro tips for a successful carve.

“It can be below zero, and you still want to protect your sculpture from the sun,” he said, so he often uses a tarp or canopy for protection because the sun and warmer temperatures cause the ice to deteriorate more quickly.

The block of ice comes in a thin box. Doeren recommends taking the ice out of the box about 30 minutes before beginning to carve so that it acclimates to the weather conditions – unless it’s a warm day, that is.

“If it’s warmer than 32 or 34 degrees, leave the block in the box until you’re ready to carve,” he said. “Even though the box is really thin, it has some insulating value.”

Richter and Doeren agree that when the carving ends and the last ice chip has been chipped, the most important thing was to have fun.

“Even if you haven’t done it before, every year gets better,” Richter said, “and it is a lot easier than you would expect. Take your time, and don’t get too worked up since it’s temporary art anyway!”

If you’ve ever wanted to try your hand at ice carving, here’s your big chance. Ice and snow carvers are needed for the Feb. 18 competition during Sturgeon Bay’s Fire & Ice weekend. New and experienced carvers are welcome and will receive a goodie bag of coupons and items to use throughout the day.

A panel of volunteers will judge all carvings, and first-, second- and third-place awards will go to carvers in each experience level. Awards will include a ribbon and a cash prize ranging from $10 to $150.

Visit SturgeonBay.net to find out more or to complete the application by Feb. 2.