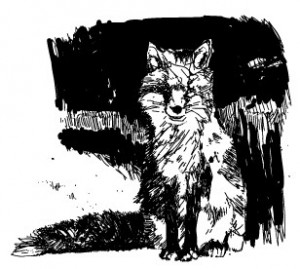 Before John had time to comprehend that he was being kissed, the soft lock Beth had created between her lips and his was rent asunder. Their mouths came apart but their foreheads came together as Russ, the muscly bartender, slapped the back of Beth’s head.

Beth’s head collided with John’s, with enough momentum to nearly knock John off his barstool. He grabbed wildly at the bar, managing to grasp its lip and pull himself back onto his seat.

“What the hell do you think you’re doing, Beth?” said Russ, his arms flailing dangerously close to the multitude of glass bottles behind his bar. “That guy’s married!”

Beth rubbed her head where it had hit John’s. It was only slightly sore.

John and Beth sat in silence a moment, mulling over what had just happened.

Russ, on the other hand, was still not much for silence.

“Okay, I did,” said Beth. “But I figured it wouldn’t work, so it doesn’t really count.”

Beth reached to grab her glass from the bar, but Russ snatched it away.

“I don’t give booze to vixens,” said Russ.

“Russ tries not to speak poorly of women,” said Beth. “I’ve also seen him give drinks to girls I wouldn’t tell my worst ex-boyfriends to sleep with, so I’m not entirely understanding his grudge here.”

Russ threw the remains of Beth’s drink in the sink behind the bar and then turned back, not looking completely pleased.

“It wasn’t about seducing him,” said Beth. “It was about showing him that things can still happen to him.”

“What do you mean?” asked John.

“Well, here you are,” said Beth, “all depressed and thinking that your life is locked in. Predestined, determined, whatever word you want to use. But it’s not. There’s always something you never expected waiting for you around the corner.”

“Like a random kiss from some woman I just met?” said John.

“Like that,” said Beth, more than a little proud of herself. “But other stuff too. Just because you didn’t get to do everything you thought you’d do and you have an idea of where your life is headed, it’s not going to stop life from being big and mysterious and surprising. Life never stops being that.”

“And what if just saying that life is going to be surprising isn’t enough?” asked John. “What if I really do need to drop everything and start over because I’ve done everything wrong?”

“Then do it I guess,” said Beth. “But just remember that you didn’t kiss me back, and you probably had a pretty good reason for that.”

John looked at the clock behind the bar. It read 1:34 am. Odds were that Julie was still up, waiting for him to get back.

“I should get going,” said John. “My wife probably wouldn’t like my being out so late with a known vixen.”

“I’m still not happy with you,” said Russ.

John left a couple twenty-dollar bills on the bar anyways and headed for the door. When he got there, the moment felt significant enough that he thought he should say something to Beth before he left.

And with that John Winstead took his leave of the Main Street Pub, got in his car, and prepared to return home to his wife.