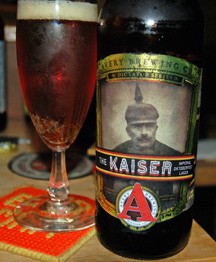 The Kaiser, a 9.5 percent Imperial Oktoberfest, part of the “Dictator Series” from Avery Brewing Co. of Boulder, Colo., is big and fruity, kind of like Kaiser Wilhelm himself.

Of course styling a beer after Kaiser Wilhelm II is playing off the Kaiser’s most famous quote: “Give me a woman who loves beer and I will conquer the world.”

His words seem funny now, but I don’t think the Kaiser was kidding when world conquest crossed his inbred mind. If not an instigator of World War I, the Kaiser was at least an accomplice in its instigation.

In short, the Kaiser was a militaristic fruitcake with mommy issues. Born the first grandchild of Queen Victoria of England, to her oldest daughter, also Victoria, and Crown Prince Frederic Wilhelm of Prussia, Wilhelm II was a breech baby, which resulted in his being born with a crippled left arm, a condition that by many accounts crippled him emotionally as well as physically. Some say his hatred for Jews helped set the stage for the Third Reich and the next world war.

So it kind of makes me sick to see the guy in his pointy helmet and pointy mustachio on the front of a very tasty beer.

Who is next in the Dictator Series? Kim Jong-Il? Idi Amin? Stalin? Hitler?

Now here’s a good beer story. Back during the 2008 hop shortage, Kevin Templin, head brewer at Red Rock Brewing Co. of Salt Lake City, Utah, found that his hop supplier would not sell him any more hops until he signed an expensive long-term contract. Rather than do that, Templin decided to brew a beer with a different bittering agent. With the help of Chris McCombs, a former Red Rock brewer who had moved on to the New Belgium Brewing Co. of Fort Collins, Colo., the two brewers decided to replace hops with dandelion greens. 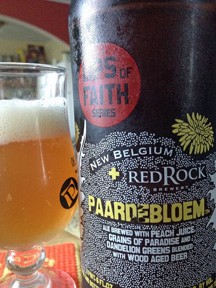 This Lips of Faith Series collaboration between Red Rock and New Belgium also contains peach juice and grains of paradise, and is blended with wood-aged beer.

As unusual as it all sounds, don’t expect your palate to be startled. It’s got a great taste with very little peach presence – perhaps a whiff in the aroma and a bit in the finish. I prepared myself for a green/grass taste from the dandelion greens, but it wasn’t there.