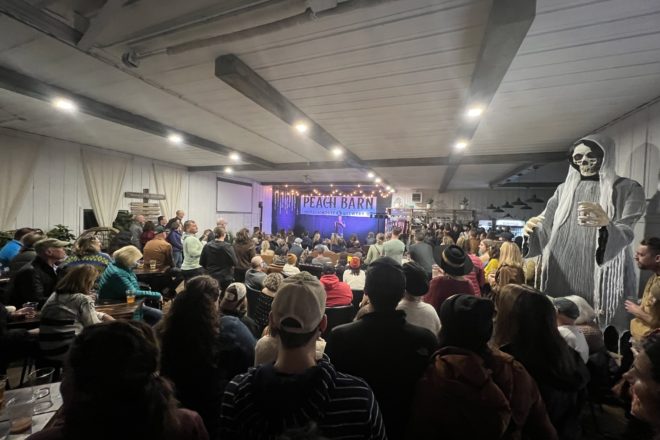 The crowd at the Peach Barn during The Knobs’ last performance. Photo by Myles Dannhausen Jr.

Last month, so many people poured into the Peach Barn Farmhouse and Brewery to see the first performance of the Door County improv troupe The Knobs that the venue ran out of seats. It was standing room only for many in the crowd of about 75 people.

To troupe member Owen Alabado, the turnout was a “pleasant but also daunting surprise. The fact that that place was so packed was insane,” he said.

The hour-long show was a series of short comedy skits based on audience suggestions, from a marriage counselor working through a husband’s addiction to WWE to a pair of police officers interrogating Guy Fieri’s murderer. Along with Alabado, the six-person cast comprised Abby Duebler, brothers Josh and Matt Stone, and cousins Brandon and Hope Bogenschutz.

During the show, Alabado’s extensive acting experience kept the butterflies in his stomach to a minimum. Tensions were higher for Abby Duebler, who hadn’t been onstage since she took an intensive improv course in Chicago three years ago. Before that, she did theater in high school and played a role in an episode of Encore!, filmed in Door County for Disney+.

“Before getting onstage, I was nervous,” Duebler said. “Then when we were finally up there, kind of forced to put into motion all of the things that we practiced over the summer, it felt really organic and natural.”

Part of that was thanks to the enthusiasm of the crowd, according to Duebler.

“The support from all of our friends and community members was almost tangible,” she said. “It was contagious.”

The Knobs were Duebler’s brainchild. She went to Alabado with the idea around 2019, but at that point, he was busy establishing Northern Door Pride. Then the pandemic hit, so they didn’t return to the idea until a few years later.

When they did come back to it, they reached out to Josh and Matt Stone, brothers who both did improv in college; Brandon Bogenschutz, who worked with Alabado on a short film and a cabaret; and Bogenschutz’s cousin Hope, who had always been interested in trying improv.

Although each troupe member has a different level of theater experience, they all share a love of performance, Alabado said. Having taught improv in Los Angeles for seven years, he passed his knowledge along to the other troupe members during their biweekly rehearsals, calling himself the “mama bear” of the group.

Although The Knobs’ performance seems spontaneous, its members follow several rules. One is to avoid negating what scene partners say; instead, actors should agree and add their own input (what’s known as “Yes, and …”). Another rule is to not ask questions and to have a solid idea of where the scene is going, which helps it build to a climax and reduces talking in circles.

Having practiced biweekly since June, the group has grown close – another asset that helped the first performance go smoothly, according to Duebler.

“We all have so much trust and admiration for each other that everything seems really easy and seamless,” she said.

Alabado agreed, saying, “We really do blend well as a team because we’re friends first.”

In the future, Alabado said The Knobs would consider increasing their cast size and performing at other venues around the peninsula, such as Egg Harbor or Sturgeon Bay. They’ll likely keep their performances monthly or bimonthly.

For Alabado, the large crowd at the troupe’s first show was proof of how much the community needed a way to come together and laugh.

“Finding out how much comedy was needed in Door County was exhilarating,” he said.