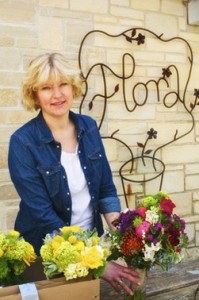 Helene Ingsten-Anderson works on the patio of her flower shop, Flora. Photo by Len Villano.

Nineteen-year-old Helene Ingsten’s travels took her to Sister Bay from Sweden by way of California. When she arrived on the Door Peninsula she was offered a place to stay by Al and Ingert Johnson. In Sister Bay she made other friends, among them a local stone mason Mike Anderson whom she married.

“In the telephone directory for my hometown, Helsingbord,” Ingsten-Anderson laughed, “there are 18 Mike Andersons! It’s one of the most common names in Sweden. And Mike’s father is 100% Swedish!” All of which might lead someone to comment that while you might take a girl out of Sweden, you can’t take Sweden out of the girl.

Now Ingsten-Anderson is the woman behind Flora: Special Occasion Flowers, a business located out in the country not far from Sister Bay on Orchard Drive.

“I’m called Flora all the time,” she smiled. “People think I’m named Flora. And sometimes they refer to Mike as Flora’s husband!” But Helene (pronounced Helen by her American friends) chose the name Flora because it refers to plant life “and is nice and short.”

She started the shop when her oldest daughter was born; Kajsa is now 15, and her younger sister Malin, 11. Both are students at Gibraltar. “Where I’m at in my life now,” Ingsten-Anderson said, “I want to be there for my kids. That’s why this works out well,” she said, refering to her shop located next door to her home. “People figure out where I am and find out it’s easy to get here.” Much of her advertising is by word of mouth. 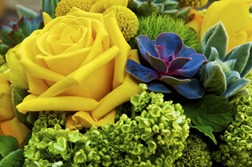 A floral arrangement by Ingsten-Anderson. Photo by Len Villano.

Ingsten-Anderson’s path toward becoming a floral designer was as circuitous as her route to Sister Bay from Sweden. Her background is in art, working with color and textures, and in particular, dealing with textiles. After a stint waiting tables at Al Johnson’s, “I started helping out at Jerry’s Flowers,” she said. “I was always interested in plants and flowers, and my mother is a gardener.”

Then, after Celeste Wegman asked her to arrange flowers for her son’s wedding, Ingsten-Anderson began working part-time at The City Farmer “under their umbrella” where she “got to figure out the business.” And then she opened her own shop, working generally alone. “It’s me and me most of the time!”

“But I can be reached by phone,” she said, “and by appointment.” Her operation is more a studio than a shop, she added, as she often does custom arrangements for repeat customers, “everything made to order.” She remains open throughout the winter because “my kids are in school. I might as well be open. And business in winter is better than I thought it would be.”

Floral design appeals to her as a career because “I wouldn’t like to do the same thing over and over again. I like to know the customer, to find what works in their home. I ask people about their favorite flowers, and try to reflect personalities.” 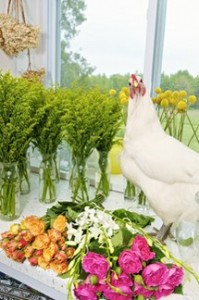 One of Ingsten-Anderson’s chickens perches on the counter top of her flower shop. Photo by Len Villano.

“I like to be creative,” she continued. “I like that I’m a part of people’s lives. Flowers are for happy occasions, like weddings and birthdays, but on sad occasions, like funerals, they make people feel better.” And when she provides flowers, “You end up talking to people, hearing stories. I like that part. I like people.”

She shows her affection for people by recycling vases when possible to lower customer’s costs, and by taking left-behind wedding flowers to Scandia Village where residents rearrange them in their own bouquets. “It’s a circle of things,” she said.

Ingsten-Anderson considers her style unique to the area. “People want something that looks like it belongs in Door County, something that could have been picked in someone’s garden here. I try to buy locally grown flowers as much as I can, but buy flowers from all over the world. I like to mix local with bought from other places.”

“I have a bit of an English style,” she added, “like for an English country wedding.” When she makes her annual spring trip to Sweden, or travels to other countries, “I see what’s going on there” regarding floral arrangements.

Ingsten-Anderson’s out of-the-way location for her shop works well for her, not only because it allows her to be a part of her children’s lives, especially at school (she sewed costumes for Gibraltar High School’s last musical), but customers “enjoy being here,” she said. “People say, ‘This is just how I thought Door County would be!’ They see our log barn, and guys start talking to the chickens!” She has eight hens, one of which, she said, has a tendency to escape from its pen and sneak into the shop looking for a place to lay eggs. 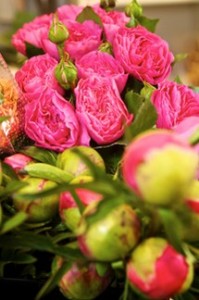 The family house is also made of logs. The garage, now her shop, was built by Anderson’s grandfather, and the stone pump house by his great-grandfather. Ingsten-Anderson’s daughters are the fifth generation to live on the property.

Someday when her children are older Ingsten-Anderson might want to relocate to Sister Bay (or some other village on the peninsula), and add a retail line to her flower design business. But for now, she is content with Flora. Her husband Mike “has been a huge help,” not only improving the shop building with stonework columns supporting a pergola, and adding stock-tank planters, but by packing for and making deliveries. “He is a talented man!” she boasted.

People talking with Helene Ingsten-Anderson will hear almost no trace of a Swedish accent, and everyone calls her Helen rather than attempting the Swedish pronunciation of Helene. But when they get to know her, they’ll discover an authentic part of the Swedish heritage that is northern Door County.

Flora, open year round with flexible hours, is located at 10280 Orchard Drive, Sister Bay. For more infromation contact Ingsten-Anderson at 920.854.9760 or via email at [email protected].