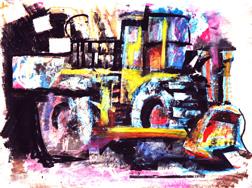 “It’s about the layers,” artist Ernest Beutel said, “the process, the details of the layers. You start to think, how did he do that?”

The answer might be found in a spray of lighter fluid or the dribbling of acetone. Or maybe the creation of negative spaces through the selective use of “stickers” on the canvas.

The result is a style that Beutel characterizes as “abstract-representationalism,” the artist’s interpretation of reality as a vision incorporating elements of abstraction. Whether the subject is a playful rendering of an animal, a grotesque characterization of a human face, or a primal suggestion of rugged construction machinery, the artist’s use of vivid colors and bold forms appears in work that may emerge from the darkness of a nightmare or might ironically float on the surface of a nursery rhyme.

“Life is a balance between the grotesque and the playful,” he believes, and adds with a smile, “I may be here now, but I am not all together there.” 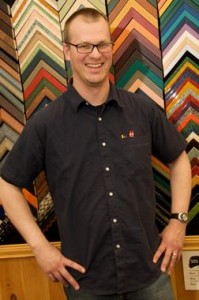 Beutel graduated from Barat College in Lake Forest, Illinois, in 2001 with a Bachelor of Fine Arts and a love for acrylics. His Broken Face series came about through his experimentation with this medium.

Drawn from imagination, the faces in some respects resemble masks. Beutel created them using acrylic liquid and spray paints, applying lighter fluid or acetone to create different effects as it “eats away” through layers of paint. The result is an image that is intricately textured and distorted with a haunting other world quality, what the artist characterizes as “a cock-eyed distortion of reality.”

The E-I-E-I-Oh! series which followed moves in a different direction, taking its title from the refrain of the children’s song, “Old MacDonald Had a Farm.” Some of the animals that Beutel has painted may be named in the lyrics, “but he could have had anything on the farm!” Beutel said, and a number of the critters are clearly products of the light-hearted imagination of the artist. 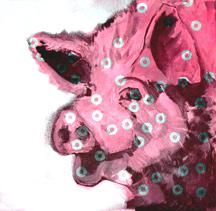 “Lil Pig Has the Measles” by Ernest Beutel.

All of the animals have undergone whimsical transformations.

After the subjects were painted in black and white, the artist strategically applied stencil stickers (binder reinforcements or shapes cut from mailing labels), sprayed on DayGlo construction paint, removed the stickers, and then painted details with other colors. The result is a “topsy-turvy world of animals.”

Beutel turned next to portraits, “people who have influenced me, artists and others, primarily people in Door County.” He created the Portrait series when he was chosen to be part of the Peninsula Art School’s emerging artists program in 2007.

Occasionally he painted on printed fabric rather than canvas. He used techniques that he had employed for his animal series, but without a comic irony. 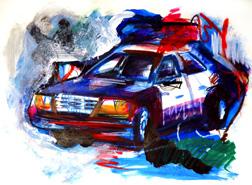 Beutel has added yet another layer to the work he is now producing. He combines crayon with acrylics using the techniques from the E-I-E-I-Oh! series. An example is the Wino Rhino displayed on his Web site, http://www.ernestart.com.

Presently crayon has become his primary medium. “I reach for a crayon first,” he said, “and that’s where I’m going with the Construction series,” which features heavy earth-moving equipment.

He incorporates a “scratch board” technique, imposing black crayon over colors, and then scraping off some of the black, sometimes with a razor blade. He will occasionally add acrylics and the sticker stenciling technique he used in earlier work. The effect is a colorful bold rugged style much in keeping with his subject matter.

Not surprisingly, Beutel loves the abstract expressionism of Willem de Kooning and the “aura” of Jackson Pollock. His early work was sometimes inspired by Salvador Dali and Giorgio de Chirico. “But I don’t know if I relate to any of them anymore,” he said.

The Door County String Academy asked Beutel and five other artists each to paint on violins that will be auctioned on May 17 at a concert at Bjorklunden as part of a fundraising program, “Vivacious Violins.” Until that date, the six violins are on display at the Door Community Auditorium’s Link Gallery and at http://www.dcstringacademy.com.

“I had a lot of fun doing that,” Beutel said, “taking the E-I-E-I-Oh! series approach and translating it to a 3-D format.” He painted a jackalope (rabbit with horns) on one side of the violin, and an elephant (the neck of the violin becoming the trunk) on the other.

The experience of creating the piece has inspired him to continue with the E-I-E-I-Oh! series using found objects. He is still developing a format, but has painted a shark on fiberboard, using the same style as in the E-I-E-I-Oh! paintings, but drilling holes in the fiberboard and gluing pieces of wood to it.

As Beutel experiments with layers in his art, he is also adding layers to his life. Presently he is taking classes to become certified as a K-12 art instructor. “I don’t know where this will take me,” he said, but he will continue to work as an artist while he teaches.

Ernest Beutel’s exhibits include shows at the Flying Pig in Algoma, the Francis Hardy in Ephraim, Charlene’s Gallery Ten in Gills Rock, and the Miller Art Museum in Sturgeon Bay. His work may be seen presently at the Paint Box Gallery in Ephraim, the Mill Road Gallery in Sister Bay, the Third Avenue Café in Sturgeon Bay, Helanders in Lake Forest, Illinois and http://www.ernestart.com.