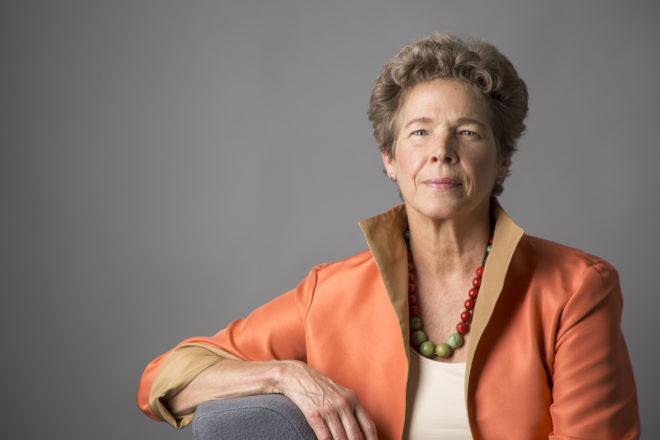 Editor’s Note: This interview was conducted before the COVID-19 shutdown.

When Tia Nelson picked up trash at her junior high school on April 22, 1970, she had no idea she was participating in the origin of one of the most important environmental legacies in history. Nelson, then 13 years old, was just listening to what her dad told her to do: something, anything, to make the earth a little greener for the next generation.

Her dad, Gaylord Nelson, was the founder of Earth Day, which will celebrate 50 years on April 22.

Between bites of a breakfast sandwich and peppering questions about interview logistics with the New York Times and Associated Press, she scurried to reduce east Madison’s morning light pouring into her office’s ceiling-high windows.

“I think my father would be surprised and delighted that it remains an enduring event,” Nelson said. “He never imagined it would occur again.”

Gaylord Nelson launched Earth Day in 1970 when he was a U.S. senator from Wisconsin. He meant for it to be a teaching tool to encourage public schools and universities to concentrate their lessons, if only briefly, on the growing environmental concerns of the day.

“He observed that antiwar teachings on college campuses had changed the narrative of the morality of the Vietnam War,” Tia Nelson said. “He wanted a day in which student activism on campus and teaching in schools have a conversation around the environment and hope; that it would galvanize the nation to the cause.”

The United States has taken few strides in environmental policy as lengthy as those years, but Tia Nelson sees opportunity ahead instead of despair.

“I am old enough to know that Americans have lived through a time as divisive and politically rancorous as today and that was the height of the Vietnam War and around the time of the first Earth Day,” Tia Nelson said. “And yet, through grassroots engagement, through the voices of youth, the country came together and adopted more environmental laws in the decade that followed the first Earth Day than [at] any other time in American history.”

That grassroots engagement is what made the first Earth Day so successful, argued Adam Rome in his book The Genius of Earth Day: How a 1970 Teach-In Unexpectedly Made the First Green Generation.

“Because [Gaylord] Nelson allowed local organizers to make their own plans, no two events were the same, and the local adaptations ensured that Earth Day would be much more than a huge demonstration,” Rome wrote.

Some people planted trees or sold cookies to protect a local park. Others held concerts and protested. Tia Nelson picked up trash at her junior high school.

“He didn’t try to give people a top-down approach to what they should do or a prescribed agenda,” Tia Nelson said of her father. “Anything that has you consciously and mindfully doing something can be your Earth Day.”

Nelson does not get far in broad discussion of a greener future before narrowing in on climate change. It is one of the most important agenda items for the Outrider Foundation, of which she is the executive director.

“Climate change is obviously the biggest environmental challenge of our time,” Nelson said. “The basic fact is that we have altered the atmosphere in such a way that we’re changing how humans will be able to live on this planet.”

Climate change is particularly challenging to solve, much less galvanize the public around. Unlike many other pollutants, carbon dioxide can stay in the atmosphere for more than 100 years, meaning that if humans stopped carbon-dioxide emissions tomorrow, environmental benefits may not be realized for decades. There are also no rivers on fire, visibility-reducing smog or other tangible effects that an average person would be able to directly connect with the impacts of climate change.

Nelson’s response to this pernicious challenge is frank, reserved and relentlessly optimistic all at once.

“There’s going to be no time in human history in which we are not faced with the environmental challenges of managing our resource base and ensuring people can be here,” Nelson said. “I feel a great sense of duty and obligation to my father’s legacy. I encourage people today to take stock of where we are and see themselves as part of a community of people who recognize that, by working together, we can build a brighter future … I feel hopeful because of youth activism today. I know how powerful it can be and what a critical role they played in the success of the first Earth Day.”

To coincide with the 50th anniversary of Earth Day, the Outrider Foundation released a short film, When the Earth Moves, which reclaims the authentic story and original vision of Earth Day as a bipartisan and socially just environmental movement. You can watch the video at Outrider.org.