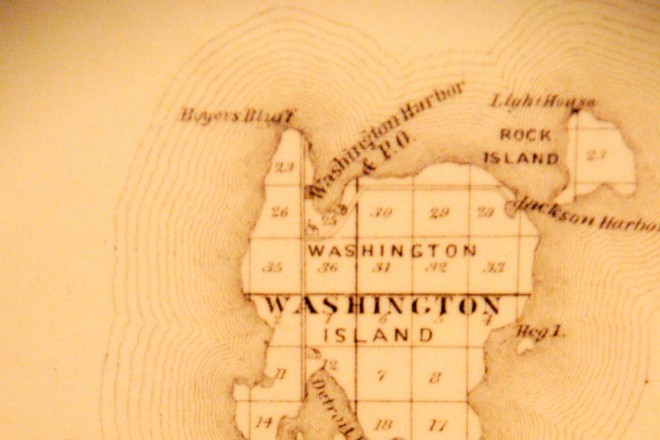 In Door County, heritage and history seep from every place imaginable. A sense of ancestry drips from the names painted upon mailboxes and carved into roadside placards, while each row of cherry trees in an orchard draws lines back to earlier days. These elements speak to the history of this place as much as the words typed upon the pages of books about the county do. And it seems, that even these printed words sometimes fall short of encapsulating all of Door County’s past. For instance, the trail of references to the Native American legend surrounding Death’s Door doesn’t quite clear up the questions regarding this treacherous waterway; rather, it adds to the allure of the southernmost corridor between Washington Island and the tip of the Door Peninsula.

According to Conan Bryant Eaton in his book Death’s Door:  The pursuit of a legend, arguably the most comprehensive collection of information regarding Death’s Door, “We deal here with a legend which demonstrably has endured at least a century and a half of telling and re-telling, twisting, shaping, augmenting and embroidering.” The website hosted by the Wisconsin Historical Society and the University of Wisconsin Sea Grant Institute, entitled Wisconsin’s Great Lakes Shipwrecks, seems to be in agreement with this sentiment, proclaiming that “like a fierce squall that blurs the line between sea and sky, the potent legacy of Death’s Door obscures the line between fact and fancy.”

Chas. I. Martin’s version of the tale, which appears in his History of Door County, Wisconsin, printed in 1881, claims the legend “which is probably founded in fact” starts with a disagreement over hunting rights on the peninsula. The Potawatomi Indians were headquartered on Washington Island and fished the surrounding bays; they used the mainland as their hunting ground and had issues with other tribes hunting within their territory. Martin continues:

…the Chippewas had been for some time killing game upon the peninsula, and every effort to drive them away had proved futile. Finally the Pottawattamies… mustered every brave in the tribe able to draw a bow or throw a tomahawk, every canoe belonging to the tribe was brought into service to take them over. The flotilla of birch bark started on its expedition of death…attempting to cross to the main land, preparatory to making an attack under the cover of night upon the camp of the Chippewas. When about one halfway across the ‘Door,’ a ‘white squall,’ such as is common in those regions, rushed down from the bluffs of the main land, struck the fleet and upset the canoes, drowning every able-bodied man of the Pottawattamie tribes.

The passageway was then known as Door of Death in the Indian language, and French missionaries translated it to “Port du mort” or “Death’s Door” in English.

While Hjalmar Holand’s version of the legend printed in his 1917 book, The History of Door County, Wisconsin:  The County Beautiful, reaches the same conclusion as Martin’s – namely that the waterway was called Door of Death after the incident – the means by which he arrives at that point differs significantly. In fact, Holand’s version includes so much fanfare that Eaton refers to it as a “white man’s fiction story about Indians” and compares it to a “full-hour television drama.”

According to Holand, the battle that ensued was between the Winnebagos and the Potawatomis. The Winnebagos had succeeded in driving the Potawatomis to the surrounding islands; however, the Winnebagos were not completely satisfied with this result. So, they “marched an army to the north end of the peninsula, made canoes, and with many human sacrifices and invocations of the Great Spirit made ready to make an onslaught upon the islanders.”

At this juncture, Holand adds details that aren’t found in many other variations of the legend. The Potawatomis, aware of the coming attack, decided to counter attack, hoping to surprise the Winnebagos from the rear. The Potawatomis sent three spies to the mainland “with instructions at the right time to build a signal fire upon a certain bluff, by which the Potawatomis would be guided in making a landing on the dangerous and rock bound shore.” The spies, however, were captured by the Winnebagos and subjected to “frightful tortures,” where two of them perished and the third was finally bribed to tell his secret.

Holand contends that upon learning the secret plan of their enemies:

…the crafty Winnebagos now prepared to turn this stratagem to the destruction of their enemies. Upon a dark and windy night, the signal fire was built, not upon the bluff selected by the Potawatomis, but upon another nearby, whose precipitous base afforded no landing place. Simultaneously they sent a small detachment of brave warriors in canoes by a circuitous route to fall upon the defenceless camp of the Potawatomis.

Upon seeing the signal fire, several hundred Potawatomis set off for the peninsula despite the unfavorable traveling conditions. When they reached the base of the cliff where the fire burned, rather than “finding a beach favorable for landing, they found their frail canoes thrown against precipitous rocks against which they were crushed like eggshells,” and those that attempted to turn back were swamped in the breakers. Around thirty Potawatomi braves found safety upon a rock shelf, and “standing here between the roaring sea and the fierce Winnebagos above them, they chanted their death song, defying the Winnebagos to come and get their scalps.” Winnebagos with “teeth gritting like dogs” and “a thirst for blood like wolves” jumped down upon their prey. “A desperate struggle ensued, when suddenly a great wave came out of the stormy deep and sucked the fighting savages off the shelf into the sea where they all perished.”

In Holand’s legend, all members of the Winnebago canoe party also perished in the storm. Upon the wreckage of their canoes washing ashore, their brethren “took this as an omen that they must never attempt to cross that ‘Door of Death’ which it afterward was called.”

Wisconsin Indian Place Legends, which was published in 1936 by the Federal Writers’ Projects, also involves the Potawatomi tribe in the legend of Death’s Door, but it does not include the treachery of the Winnebagos or the captured spies. Rather, this account of the legend depicts the controversy between the Noquet, who resided on Washington Island, and the Potawatomi, who resided on the peninsula. After the Potawatomi invaded the island while the Noquets were away, “…the spirit of the trouble spread his mantle over the peaceful isles.” The Noquets declared war and set out to raid the Potawatomi; however, “the medicine men were failures, or else the braves neglected, in their haste, to propitiate the manido for they had only gone a portion of the four miles which separated them from their enemies when a breath of wind struck them, the foreurunner of a hurricane which swept the waters in green masses over the frail craft.” Not a single member of the brave band was seen alive, and their bodies were said to have washed ashore on Detroit Island for their relatives to bury in hasty graves.

Even in its simplest form, the legend captures an essence of intrigue. William H. and Charles J. Olson wrote a guidebook of Washington Island in 1994 wherein they pared down the story into its common threads:

The name ‘Death’s Door’ comes from an old legend about two tribes at war. One was on the mainland and the other on Washington Island. The canoes of one group crossing this passage to attack the other were caught in a sudden storm and destroyed. When French explorers heard this story they named the passage ‘Porte des Morte,’ translated as Death’s Door.

Despite the numerous variations, or perhaps because of them, the legend and aura surrounding Death’s Door has continued to grow over the years. According to Eaton, technology has “removed the sting of Death’s Door. But even the most self-assured human must look on with awe when the waterway occasionally shows its fiercest face.” Especially when the wind and water show this fierce face, the Native American legends surrounding Death’s Door resurface, coloring the landscape and adding to the layers that make Door County a unique place.