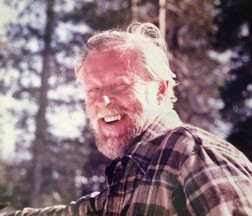 The life of David Peterson, hailed as Wisconsin’s Musical Historian, will be celebrated in a gala musical event on June 28 at 2 pm at the Northern Sky Amphitheater in Peninsula State Park in Fish Creek.

Peterson has been called the Godfather of Northern Sky Theatre and without him there would have been no American Folklore Theatre. In the early 1970s Peterson created the Heritage Ensemble and performed his original musicals in the park amphitheater up until his retirement from the University of Wisconsin – Madison in 1994.

Peterson’s legacy will be celebrated through story and song performed by original cast members of the Heritage Ensemble. This concert offers a rare glimpse to the time and place where it all began in Peninsula Park.

The event is open to the public but a park sticker is required to attend. There is a suggested donation of $15 to attend the concert. Proceeds from this event will benefit the Northern Sky Theater Internship Program. In case of rain, the event will take place in the Old Gibraltar Town Hall, 4097 Main St., Fish Creek.