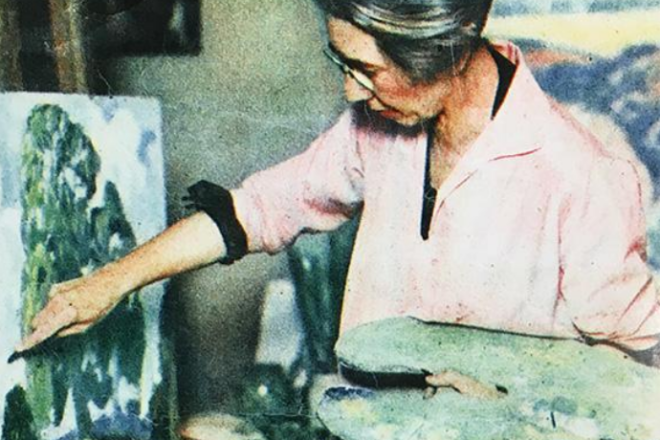 Jessie Kalmbach Chase. Photo by the Milwaukee Journal. Courtesy of the Museum of Wisconsin Art.

“It is best not to do the actual canvas in the field,” Chase told a Wisconsin State Journal reporter in 1930. “For the artist is thus tempted to merely copy nature. It is better to make many sketches out of doors and then to paint the finished study in the studio.” 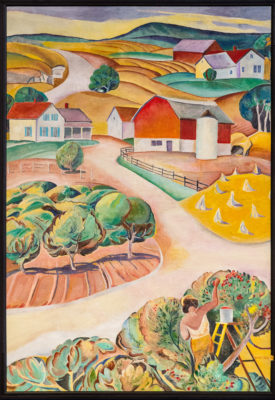 The versatile artist, born Jessie Kalmbach in Sturgeon Bay in 1879, took few liberties in rendering her beloved peninsula in oil, watercolor, cement fresco and serigraphy. Her sketch-outdoors, create-indoors approach was a discipline that required her reliance on mental snapshots of color and movement. And, according to many reports on the pioneering female artist, kept her out of reach of pesky mosquitoes.

Just two of Chase’s paintings indicate a diversion from this approach, and they are the only two remaining locally-inspired works easily visible to the public. They are also among her most vibrant and imaginative, leaning away from her diligent sketching to make way for paintings that capture her love and admiration for her homeland.

Looming large over the Sturgeon Bay library – and viewable from nearly every corner of the two-level building – are twin murals, each 5’ x 7’, that once flanked the stage of the old Sturgeon Bay High School auditorium.

Painted in 1942, the murals honor the maritime and agricultural industries of Door County. In one, a woman standing atop a ladder harvests bright red cherries from a tree. In the background, a softly tinted country road winds between orchards, barns and farmhouses before disappearing in the hills of a rolling countryside. The oil painting, dominated by warm primary colors, honors the post-Depression era of simplicity when it was created.

In the other mural, Sturgeon Bay’s waterfront is given play in a much softer, albeit livelier, composition. The Michigan Street Bridge is front and center while a Great Lakes freighter floats in the distance. In between are activities still typical of the city’s shipping canal:  tug boats waiting, shipping containers ready to be loaded, and off in the distance, a barely perceptible mark representing the Sherwood Point Lighthouse. 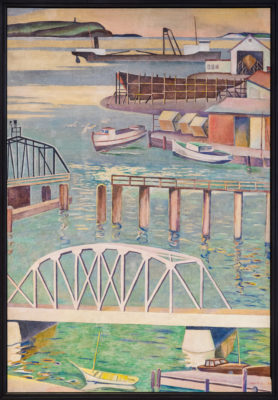 These images were inspired by Chase’s memories of her home. More than depict actual scale and location, they imbue the very best of Door County – its characteristic nature and landscape, and the hardworking folks who live here.

Though she harbored a great love for the peninsula, Chase spent the bulk of her adult life in Madison, where she moved following her studies at the Art Institute of Chicago and work with Chicago’s Temple Art Glass Company. There, she designed glass windows for churches, synagogues, homes and businesses, and in the factory, watched the window designs of American architect Frank Lloyd Wright take form.

Her observations of light, colors and patterns in this work had a great impact on Chase’s artistic style. She became known for expertly capturing light and shadows, fresh use of color, and well-balanced compositions. Of all her artistic accomplishments, though, few were as significant and visible in their time as those she created in 1933-34 for the Works Progress Administration’s Public Works of Art Project, the Depression-era program aimed at giving meaningful work to unemployed artists by commissioning works that emphasized the “American scene.” For that, Chase created two murals, one each for the Madison Public Library and the Bank of Sturgeon Bay.

These projects came about during a new direction in Chase’s art career. As a muralist, Chase became an early adopter of working in cement fresco (fine cement mixed with pigments) and it is in this medium that she crafted most of her community murals, including a mural in the Fort Atkinson Civic Building providing a bird’s-eye view of the site, complete with trees, wild animals, a teepee, and bow-wielding Native American, that the riverside city in south-central Wisconsin would occupy. She also used the medium to craft a 1930 cement fresco mural in the main corridor of the Madison West High School, which reflected the hills and lakes of the state capital. 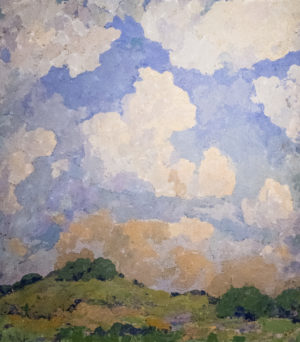 Though Chase enjoyed the artistic opportunities of her adopted home, she returned to the peninsula every summer and finally moved back to Sturgeon Bay in 1948. She began experimenting in serigraphy, and it was this medium that would expose her work to many Door County vacationers, as she sold the prints at country gifts shops and in her home studio through the 1960s.

Though she died in 1970, those collections live on under the care of the Miller Art Museum in Sturgeon Bay, located just steps away from Chase’s colorful murals of peninsula life.

A selection of Jessie Kalmbach Chase’s work is available to view by request at the Miller Art Museum in Sturgeon Bay.