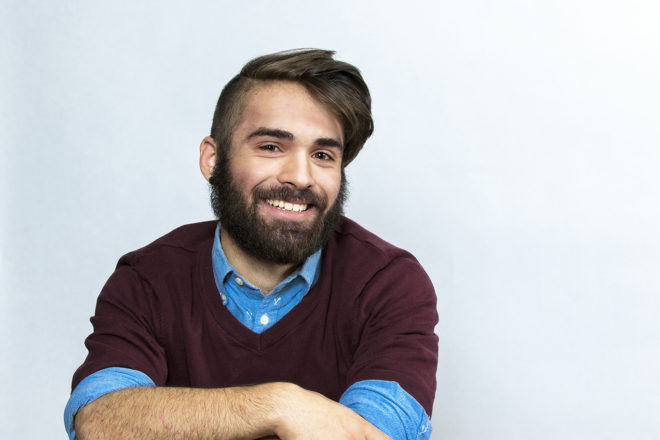 When the door to high school sports closed for Jimmy Balistreri because of concussion-related issues, another door opened that led him to the theater. He fell in love with it.

Being onstage is what initially drew him, and he acted throughout high school and college. But more doors soon opened as he was introduced to the technical world that exists offstage.

“My mom was an engineer, and my dad worked with power lines, so I’ve always been a hands-on person,” Balistreri said. “Being able to build and design and do all of the different things that come with being backstage, I really started to enjoy that more than being onstage.”

It’s very common for students, even those who aren’t theater majors, to interact with college theater through a work-study program building sets in the scene shop. Balistreri started this way and then found himself operating the sound board for a production of She Kills Monsters at Ripon College. Shortly after, he dropped his chemistry major in pursuit of a theater degree.

“Growing up, you think, if someone’s getting a theater degree, they’re never going to work a day in their lives,” Balistreri said. “They are going to be unemployed and struggling.”

His professors were eager to banish that idea, and Balistreri himself learned firsthand that it’s really not the case, “especially on the tech side,” he said. “There’s a lot of careers in a lot of different fields, and you get skills that all translate well.”

Balistreri took some time off from Ripon College and worked at Wild Tomato in Fish Creek while spending a summer with a friend who shared a love for the peninsula. Camping at Peninsula State Park was a Balistreri family tradition, going back to when his grandparents used to take his father camping as a child.

“My first introduction to theater was actually in Door County at American Folklore,” Balistreri said, referring to the theater company that today is called Northern Sky Theater. Fast forward to 2018, and he found himself working on the very stage where he saw his first show as a toddler after Chase Stoeger stopped in to pick up a pizza and told him about an internship opportunity at Northern Sky.

As an intern, Balistreri worked backstage on Muskie Love. After a summer of painting the outdoor stage in the park, moving equipment into the new Gould Theater building, working on the pit-orchestra area and more, Northern Sky extended his contract through the fall, so Balistreri asked for some time away from Ripon College to continue his internship.

“It really was a great experience, and it made it so that when I came back to finish my senior year, I was able to open so many more doors for myself,” he said.

Then a chance meeting with Robert Boles and James Valcq – whom he knew from working on Boxcar at Northern Sky – at a UW-Stevens Point job fair brought him back to Door County after graduating from Ripon College to work at Third Avenue Playhouse (TAP) in Sturgeon Bay.

Balistreri stage-managed for TAP, but working in a smaller theater also allowed him to try his hand in all manner of technical areas.

“It was like living in a theater for a year,” he said.

At TAP, Balistreri also developed a passion for lighting design, something he’ll pursue in graduate school in Los Angeles.

He begins his lighting designs with a first read-through of the script and takes notes on his emotional response.

“It can be difficult to remember how you first reacted to something after you read the script several times, but it reminds me of how the audience will react when they see the show,” Balistreri said.

From there, dramaturgical work begins to answer questions about the show, such as where and when it’s set, who the characters are and what the aesthetic is. These notes are compared with those of the director and artistic team to help form the look of the production. Then Balistreri works closely with the set and costume designers to ensure that the three of them aren’t producing conflicting elements.

Balistreri lays out his lighting plot in a 3D program called AutoCAD to firm up his design and creates a cue chart to mark every single lighting change that will need to be made throughout the performance. This becomes more detailed as he works with the director and sees the blocking on stage.

After the lights are hung and focused, Balistreri programs the cues into the lighting board for a first rehearsal. If he’s lucky, an actor or two will walk the space so he can see how the lights fall on an actual person, but he’s also made do with mannequins.

“The goal of lighting is to help the design team create the world of the show,” Balistreri said. “Good lighting design will allow the audience to suspend their disbelief and really dive in.”

Lighting often provides the actors with the same benefits. The first time actors feel the lights on their face in rehearsal, it’s a powerful moment that often helps them to take the next step in the performance. Balistreri knows this feeling well.

“A lot of the choices I make are educated choices based on the emotional reactions I had as an actor,” he said.

Skilled lighting design is something that audience members may not notice when they see a show – especially one with realistic lighting – and it can be difficult to explain the artistry that goes into it.

“It’s tough to talk about because it’s so conceptual,” Balistreri said, but he summed it up this way: “It’s like painting a picture. You’re throwing color on a canvas.”