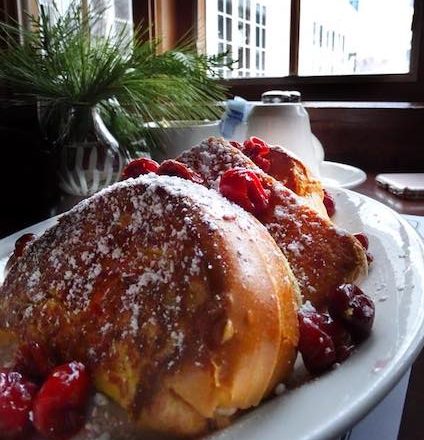 In May 2010, the whole country was talking about Door County cherries when Good Morning America announced that fans had voted the White Gull Inn’s cherry-stuffed French toast the Best Breakfast in America. The dish had been on the menu for more than two decades at that point, but its origin was not in cherries.

“We would sit around and have brainstorming meetings,” said Andy Coulson, owner of the White Gull Inn from 1972 to 2018, when he passed the title on to his daughter and son in-law, Meredith and Chris Coulson-Kanter. In 1985, Kevin McCarty joined the inn as its kitchen manager, and Coulson asked him to come up with a signature dish for breakfast: “something we could be known for other than our fish boil,” Coulson said.

“We all told him it was delicious, but this is Door County, and we are known for cherries, so replace the pineapple with cherries,” Coulson said.

Although guests loved the new addition to the morning lineup, it wasn’t until Coulson was helping out on a particularly busy day in 2010 when things really took off.

“They told me I had a phone call, and that it was ABC,” Coulson said. “I thought they wanted to sell me some advertising, but instead a producer from Good Morning America told me that people were saying good things about our food – particularly about a breakfast item.”

The producer told him that the show had appealed to its viewers to send in nominations for the best breakfast in America.

“I’ll tell you something that not many people know,” Coulson said. “The producer said they received a wonderful letter from someone who stayed with us at the inn and loved our cherry-stuffed pancakes.”

Wait, pancakes? Coulson suggested to him that a lot of places around the area offer cherry-stuffed pancakes, so maybe he meant the White Gull Inn’s French toast. The producer agreed, and soon it was down to four restaurants across the United States. Good Morning America presented the dishes, and the viewers voted.

“It was a close one,” Coulson said. “When the winner was announced, we were shocked.”

Bill Weir, ABC news co-anchor and co-host of Good Morning America, even said he had to take himself out of the running because he loved Door County and the food at the White Gull Inn.

“Within days, we were as busy in May as if it were the middle of the summer season,” Coulson said.

The White Gull Inn had its distinction of “America’s Favorite Breakfast” added to the sign outside the inn, and ever since, what started with a letter from a fan to Good Morning America has taken the business to new heights. Now the restaurant’s cherry dishes have become so popular that it goes through about 8,000 pounds of Seaquist Door County cherries a year.

So who was the mystery nominator who wrote to Good Morning America?

“My husband and I have traveled all over the world, and White Gull is the complete package,” said Milwaukeean Debbie Hecker about how the White Gull Inn motivated her to write to the contest. “It’s the ambience, the friendly staff and those amazing pancakes,” she said.

“I believe I wrote in and nominated both the pancakes and French toast,” she said. “I can’t remember.”

But Coulson remembers Hecker and couldn’t be more thankful for his wonderful guest.

The recipe for cherry-stuffed French toast is available in the inn’s cookbook, The White Gull Inn: Door County: Favorite Recipes from Our Kitchen, edited by Andy Coulson and published by Amherst.