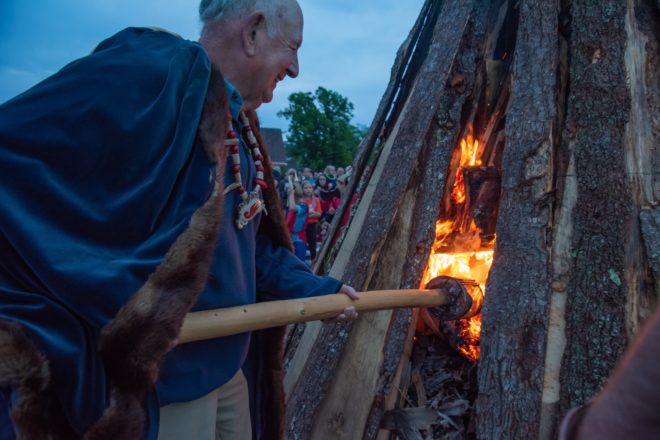 As dusk falls over Eagle Harbor on the evening of Fyr Bal – always scheduled close to the date of the summer solstice – all eyes turn toward the water. Then, out in the distance, it appears: a Viking ship, and on it, the new chieftain of Fyr Bal.
In reality, it’s a pontoon boat transporting to shore the community member who’s been selected as that year’s chieftain. But this is local lore and legend, so as the crowds gather around the water June 18, hoping to catch a glimpse of the boat, they will suspend reality while waiting in revelry and awe for the announcement to be made.

“They try to keep it quiet and secret because it’s a fun reveal,” said Tad Dukehart, the 2018 Fyr Bal chieftain. “And even then, whoever is announcing the arrival of the chieftain in front of the village hall tries to make it more suspenseful: ‘Oh, there it is! Who is it? Who could it be?’”
A hearty welcome greets the new chieftain upon his or her arrival; the official Fyr Bal medallion is bestowed; and the chieftain dons her or his robe. It’s then time for the new chieftain’s first (and, really, only) official duty: raising a torch to the first pyre, setting it ablaze and thereby officially ending winter.

“The tradition of the Fyr Bal is symbolic of burning the winter witch and welcoming summer,” Dukehart explained. “So the bonfires are lit all around the harbor. The new chieftain is responsible for lighting the first one.”

Although that may be where the chieftain’s official duties end, this honor, bestowed upon one community member annually, lasts a lifetime.

“All of a sudden, there are a few names that just sort of get floated out there,” Dukehart said, further explaining that the suggestions are generally for people who have contributed to the community in some fashion, though being a village resident isn’t a requirement.

“It’s a recognition of their contribution,” Dukehart said. “Most of the people who have been selected have done numerous hours of volunteer work or contributed to the community in some significant way. But nobody ever thinks they’re going to be the Fyr Bal chieftain.”

Dukehart said he certainly didn’t, and neither did Diane Kirkland when she received the title in 1997, despite having been the village clerk for the previous 14 years.

“When I moved to Ephraim permanently in 1983, I said I’d love to be involved in the village; that I wanted to live in an old, white, two-story house; and someday I’d like to be chieftain,” Kirkland recalled.
She checked the first two goals off her list in short order, but she expected that the last one, if it were ever to be, would still be several years off.

Yet at age 50, Kirkland wore the chieftain robe and held the title.

“To me, that seemed an insurmountable achievement: to be honored by my neighbors and peers,” she said.

Fyr Bal definitely draws its share of tourists – approximately 2,500 – to a village that otherwise boasts a population of only 236. But behind the scenes, the festival and the chieftain role are an integral part of the community’s history and identity. The festival began during the 1960s as a way to honor the community’s Scandinavian heritage and to create a fun event to celebrate the end of winter.

“We are a tourist destination, for sure, and people go on vacation to experience the local color and that place’s history,” Kirkland said. “[But] because our local people are so invested in our history and heritage, I think the locals enjoy Fyr Bal as much as the visitors.”

“The kids in my neighborhood saluted me every time I drove by for years!” Kirkland said.

The Fyr Bal 2022 festivities will begin at 8 am on Saturday, June 18, and continue all day, concluding with fireworks at sunset after the chieftain ceremony and bonfire. Find additional information at ephraim-doorcounty.com/play/events-festivals/fyrbal.