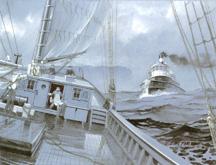 “Ready for a Tow” by Charles L. Peterson.

Charles Peterson sits on a swivel office chair in his bright, open studio in Ephraim. A counter top is lined with prints of his paintings, a white bookcase contains stacks of National Geographic, and classical music from Wisconsin Public Radio fills the room. He says to me before all else, and stresses throughout our visit, that he has had a “lucky life.”

“I have good health and the desire to keep painting,” he says. At 83-years-old, many would call his ability to paint six days a week a feat, but he smiles when he says, “It is all that stands between me and insanity.” 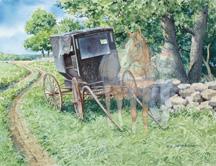 A renowned, accomplished artist, Peterson, an Ephraim resident since the ‘70s, continues to enjoy a successful career. He paints a wide range of subjects, from landscapes to nautical themes to his unique “Memories” paintings – paintings that depict translucent, ghost-like individuals of the past against the backdrop of an aged setting, such as an overturned rowboat or a run-down cheese factory. He has been honored with a series of awards, for his artwork as well as his long career as a Professor and Department Head at Marietta College, but one would hardly guess the immense prestige Peterson has; he is so humble.

I spot evidence of his extensive knowledge and desire, or impulse, to teach as he leads me to his current project, a painting depicting a Norwegian myth, and again when he describes trying to capture the emotions of his fellow sailors in a drawing the day the Japanese surrendered in Word War II. 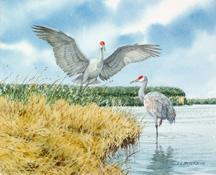 It was during the war the Peterson realized his potential as an artist, though he had been drawing all his life.

“I had two older brothers who always tried to include me in baseball games, but I gave up playing for drawing, which frustrated them,” he laughs. Because the men in the Peterson family were engineers, Peterson studied math and science in high school. However, he never stopped drawing.

During the war, Peterson’s drawings caught the attention of his fellow sailors. “I sold a drawing of the ship I was on to a shipmate for $10 and discovered that he sold it to a ship executive for $20,” he explains. “That is when I realized that I might be able to do something with this.”

His mother, who gave Charles the nickname of “Chick,” always calling him her “little chick,” also saw the potential of his work.

“I discovered just last year that my mother directed my life,” he states. His mother sent drawings and notes to the Chicago American Academy of Art for feedback. The drawings and letters were sent in the late ‘40s and kept by a secretary.

“They told her that I had potential, but more training was needed,” he says. He attended the art school after working as an illustrator for a time after the war. “The school was classically orientated,” he says, “which was a perfect fit for me. For two and a half years, half a day, everyday, I did life drawing.”

After graduation, Peterson did commercial art, but he states that he “became disenchanted.” As fate would have it, he ran into an old friend from his Boy Scout days who was teaching at Marietta College and encouraged him to attend the school. So began Peterson’s life in academia.

“I got an undergraduate there, but faculty life is what interested me,” he says. He went on to receive a Master of Fine Arts in painting from Ohio University and accepted his first teaching job at Concord College in West Virginia.

Through twists and turns of fate, he met his wife Susan while spending a summer in Madison, Wisconsin and ultimately returned to his alma mater as department head of the art department.

Peterson’s life in Door County began when he and his wife built a cottage in Ephraim in 1967, where he spent his sabbatical in 1968. “It was wonderful,” he says. “I could paint what I wanted to paint that year and discovered that my work could support the family. I was in the right village at the right time.”

In 1973, Peterson retired from teaching to pursue his art and, along with his wife and three daughters, moved to Ephraim permanently. “My life has been lucky,” he says again. His artwork received more than enough attention to support his family and attract Mark Quale of White Door Publishing, who became Peterson’s agent. “He took care of everything,” says Peterson. “I could stay home and paint. He would bring in prints for me to sign and it was wonderful.”

Soon Peterson was on the top 10 list of artists for U.S. Art magazine, and he remained on the list for several years. He has also been listed among the “Modern Marine Masters” by The Maritime Gallery at Mystic Seaport Museum where he has won several prizes.

Still, he paints six days a week, one painting at a time. “It’s my escape,” he says. He paints until 3 pm, when Wisconsin Public Radio broadcasts the news, stating that he “tends to avoid current history,” opting instead for a “restorative” walk.

In the past, Peterson spent a great deal of time studying other paintings and techniques, traveling to Europe, visiting galleries, and conducting research. Now, Peterson states that, “As I’ve grown older, I’ve centered in on my own objectives. I have little interest in the study of others and become a Peterson.”

However, his paintings do require a fair amount of research, “I use the computer extensively,” he states. He has also begun painting commissions, including “ghostly interpretations of family’s relatives.”

On May 29, the Cottage Row Framing & Art Gallery in Fish Creek will hold a reception for Peterson (see sidebar), an event he looks forward to, stating that “People have been supportive for many years, and their reaction to my work is important.”

He goes on to say that, “As I get older and older I like that thinking people are interested in my work and are not led by critics.”

Peterson concludes the interview by giving me a copy of his book, Reflections, a biographical look into his life including many images of his paintings and states once more, “I am so lucky.”

For more information regarding Charles Peterson, visit http://www.clpetersonstudio.com or call 920.854.4033.