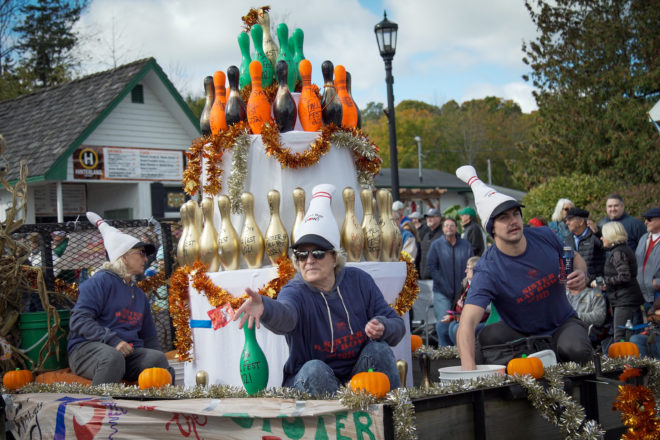 The Sister Bay Bowl float was the star of the parade in 2021. Photo by Rachel Lukas.

It’s Fall Fest, Door County’s largest party and Sister Bay’s annual farewell to the season. And yes, it’s crowded. Thousands will pack the highway when the village closes the road on Saturday and Sunday morning at 9 am. If you’re trying to get north or south of Sister Bay, you’ll have to take the detour around the village and add a few extra minutes to your commute.

But for that inconvenience, tens of thousands of dollars will pour into the accounts of area nonprofit organizations, and much more will go into the registers of area businesses, helping them to cover the inevitable shortfalls that are coming between November and April.

Hundreds of local and visiting kids will spend hours at the bounce houses, on the Ferris wheel, chasing ping-pong balls and playing games on the waterfront. Artists and crafters will have one of their best days of the year, and musicians from near and far will get a weekend full of gigs entertaining revelers in the streets, in beer gardens and under tents.

Families will chase candy along the parade route after local veterans pave the way for marching bands and floats; fish will be boiled at the fire station; and grills will fill the air with the smell of brats, curds and burgers.

On Sunday morning, the road will clear for 24 kids ducking their heads into their derby cars to race down the hill in a revamped tradition that dates to the early days of the festival.

And perhaps most importantly, the servers and cooks and housekeepers and hosts who keep the northern Door County economy humming all season long will get a chance to let loose a little, reunite with friends and roam the streets of the community they help to create.

It’s Fall Fest, and if it’s not for you, that’s OK. Everything can’t be for everybody, but this festival is for more than most. And during those gray days of November and March when restaurants and shops are still open, remember that many can pay those winter bills because of this one last fall hurrah.

Cheers to Fall Fest and all who make it happen!