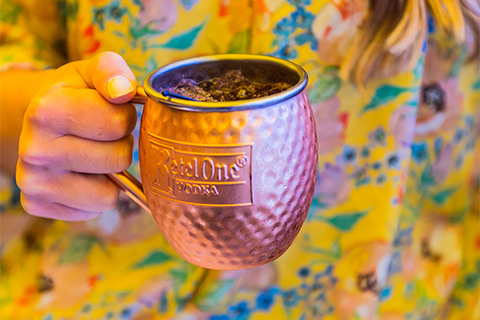 As the days get warmer, the cocktails get colder, and there is no better way to keep cool than with a Moscow Mule. The zesty, lime-and-ginger libation is a popular choice of bar-goers year round, but the height of popularity is when summer hits its stride.

According to cocktail legend, the first Moscow Mule was born out of a desire to sell more Smirnoff vodka and ginger beer. At the start of the 1940s, John Martin, purveyor of Smirnoff, partnered with Jack Morgan, founder of Cock ‘N Bull tavern in Hollywood, to promote their new cocktail based on the combination of ginger beer and vodka. The drink soon found popularity in Los Angeles, earning the title of “the best drink in town” but officially going by Moscow Mule — the Russian vodka cocktail with a kick. 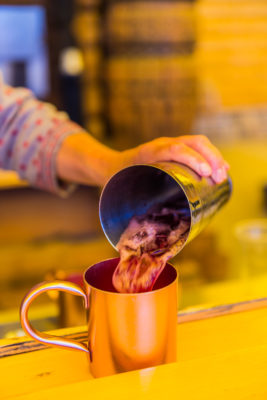 The classic version of the Moscow Mule uses a combination of lime, vodka and carbonated ginger beer served over ice in a copper mug and garnished with a twist of lime. The copper mug is said to enhance taste and keep the drink an icy temperature, but truth be told, the presentation is where the mug really adds value.

The Malmö Mule requires a homemade blueberry simple syrup, which is a nod to a similar Scandinavian fruit, the bilberry. The sweet indigo-colored berries create a deep-purple syrup once puréed and strained. Stabbur creates four gallons of the syrup at a time and often go through two gallons a day during the busy season.

Keeping with the Swedish theme, Svedka vodka is used for the spirit. Mixed with lime juice, blueberry simple syrup, two dashes of Angostura Bitters and topped with ginger beer, the drink is finished with a garnish of three fresh blueberries and — of course — served in a copper mug.

Bryn Buselmeier, manager at Stabbur, said once one person orders a mule, it sets off a chain reaction of orders from other patrons. There’s something extra enticing about the shiny copper mugs on a hot day.

Place medium saucepan over high heat and add water and sugar. Stir continuously until boiling. Remove from heat and add blueberries to hot syrup. Purée until all blueberries are pulverized. Strain syrup using mesh strainer until all pulp is removed from liquid. The color of the syrup should be dark purple; purée more blueberries if needed. Place container in refrigerated environment (uncovered) until cool.