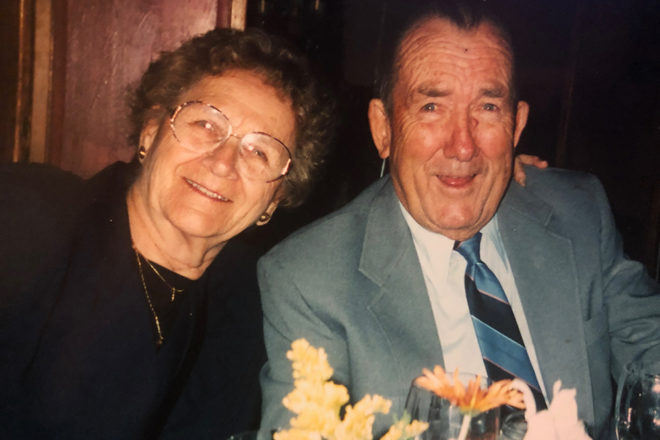 When Earl Willems asked Rita Baeten out on a date in 1945, she stood him up.

“I heard he was a rounder,” she recalled 72 years later. “He got in a lot of trouble with the ladies.”

But they had shared a dance at Geisman’s Bar in Egg Harbor, and Earl was sold on the young woman who spent her days serving three meals a day at The Alpine Resort. “I’m going to marry that girl,” he told a friend. And if that was going to take some persistence, so be it.

The two would marry in 1947, and in 1950, Earl’s father would set them up to run the Sister Bay Hotel, which at the time had a restaurant and popular dance hall. After several successful years, they made a monumental decision in 1958 to ride the wave of a new craze: bowling.

“I don’t remember why we thought about it, but we tore down the dance hall and put in six lanes,” Willems said in an interview in October 2017. Earl would run the bar and the bowling alley; Rita did the rest. She managed the dining room, took care of payroll, did the hiring and firing, dressed to impress at the hostess stand every night and served as the soul of a kitchen that would serve as many as 750 diners on Friday nights. Many of her recipes remain on the menu today.

The Sister Bay of those early Bowl days was a smaller town, and Earl and Rita were at the center of it, along with Emma Husby and friends such as the upstart restaurateur with the breakfast counter down the street, Al Johnson, with whom they sometimes went to Packer games on fall Sundays. The Bowl hosted leagues five nights a week and served Old Fashioneds and Harvey Wallbangers to the crowds that came to watch the action (yes, people came out to watch bowling) and dance to the tunes of The Birminghams in the bar.

When Door County emptied after Labor Day, they escaped the Bowl to make the rounds of the peninsula’s taverns, spending long days driving to visit friends at the Hillside, Casey’s, Florian and elsewhere.

At first they lived in the restaurant, then next door, and raised four children – Gary, Sharon, Steve and Penny – who would grow up and into the family business, taking over when Earl and Rita turned over the reins in 1983.

Earl was known to step behind the bar to give away drinks until he died in 2008 at age 87, and Rita continued making soups for the restaurant well into her 80s. And up until the very end, she remained humble. When she talked about the institution the Bowl became, she talked as though it was something that happened to them, rather than something that she and Earl made happen.

“We just tried to work hard and make good food,” she said. The bowling alley became known for its steaks, fish, and more than anything, its famous Friday-night fish fry that had customers lined up at 4:30 pm waiting for the dining room to open.

Rita was born in Wrightstown in 1925, the seventh of 11 kids, and came to Door County the summer after graduating from high school to work her first job waiting tables at The Alpine for the Bertschinger brothers. There she served vacationers on the American Plan, which meant a vacation minimum of a week spent mostly at the resort, with three square meals included. Rita worked seven days a week, walking “uptown” to Giesman’s, Casey’s or Murphy Moore’s to dance and socialize at night.

During nearly a century, Rita saw Door County become something much different than how she found it, in part thanks to a chance encounter with a rounder named Earl at Giesman’s 72 years ago. But those changes didn’t diminish her affection for her town.

“I think it’s beautiful now,” she said of Sister Bay, the village she called home until the end. “Without the telephone poles, the new beach. I always tell my friends in Florida that we have a really beautiful village.”

As if she had nothing to do with making it so. The rest of us know the truth.

Rita Willems will be remembered with a mass of Christian burial Tuesday, May 21, 11 am, at Stella Maris in Sister Bay. Visitation will precede, 9:30-10:50 am, at the church.