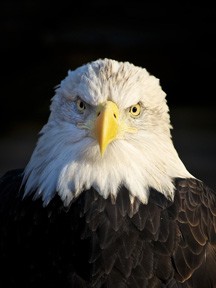 What an exciting pleasure it has been on a few occasions this past week to look up and see a mature Bald Eagle soaring above, its white head and tail such excellent and unmistakable badges of identity. Up until the time I finished my military duty in June of 1955 I had yet to see our country’s national bird.

Chemicals, especially DDT, reaching large bodies of water eventually polluted the food of these great birds, leading to a precariously low population in the lower states in the late 1940s and early 1950s. A long very tough fight, led by University of Wisconsin Professor Dr. Joseph Hickey, led to a ban on DDT in this country and eventually other deadly chemicals as well. Hickey, in his book, A Guide to Bird Watching, gave much credit to Charles L. Broley for his initial work and discoveries with the Eagles. Finally, at that point, we could look to a slowly increasing number of Bald Eagles as well as Ospreys.

Charles L. Broley, the famous “Eagle Man” during the late 1930s and into the 1940s, had retired from banking and took up the hobby of banding young Bald Eagles still in their nests. Some of the nests in tall White Pines and some in other trees that were as high as 100 or more feet and had to be precariously reached by climbing a difficult-to-manage rope ladder. 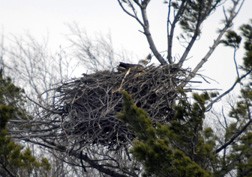 Here is one of the successful and huge Bald Eagle nests in Door County.

He trained physically until he could chin himself 18 times in succession before attempting to climb to that height. By the time he was finished banding during the course of several years, he had banded 1,200 Bald Eaglets. His careful observations and notes, telling of the fairly rapid decrease of nesting Eagles, led to realizing the terrible impact DDT was having on those birds. Several books were written about the accomplishments of this amazing man. One book, Birds Over America, by Roger Tory Peterson, has a very good summary dealing with Broley’s Eagle banding.

How fortunate it was for me to join the Wisconsin Society for Ornithology (WSO) in 1956, because those dedicated birders really knew where to look for birds, including Bald Eagles. Word spread quickly that year that a few had been sighted below the Petenwell Dam situated along the Wisconsin River south of Wisconsin Rapids. There, these birds had good food with the fish that had been stunned or killed while coming through the turbines at the electric-power generating dam, and that’s exactly where we WSO members went to find the Eagles.

My second teaching job, after receiving my Master’s degree in education at University of Wisconsin – Madison, was in Wisconsin Rapids and I wasted little time in getting to know the Petenwell Dam area well. I think my high Eagle count came on a cold winter weekend in early 1960 when I counted 26 wintering Bald Eagles through my spotting scope from one spot on the bridge that crosses the Wisconsin River. There always were plenty of fish to be had for those magnificent raptors in the turbulent water below the dam. 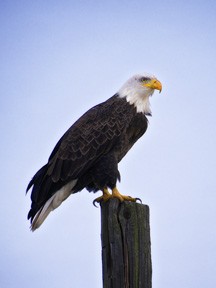 Bald Eagles do not attain their white heads and tails until they are about four years old. Adult Golden Eagles, seldom seen in our part of Wisconsin, can understandably be mistaken for an immature Bald Eagle because both have dark brown bodies and wings.

Some people mistake soaring Turkey Vultures, having a wingspan of about six feet, for our national bird. The Vulture holds its wings considerably upward at a distinct dihedral, a broad V shape, when soaring. The dark and light under-wing pattern of the Vulture is easy to see too. The eight-foot wingspan of our Eagle, dark brown wings held very horizontally with the earth below as the bird soars, is a thing of beauty to behold.

A lot of polluted water has gone over the dam, in regards to the Bald Eagle, since it was selected by Congress in 1782 to be our national bird. The choice came over the objections of Benjamin Franklin, who wanted the Wild Turkey to be our national bird. Actually the Eagle’s reputation was obviously questionable in that it did not receive protection in our country until 1940.

Alaskans for years considered this imposing creature to be a serious threat to its salmon fisheries. A bounty law on Eagles went into effect in 1917 and during the first 10 years alone, bounty was paid on 41,812 (dead) Bald Eagles. Fortunately protection for the Eagle was extended to Alaska in 1952, just in time to stop the shotgun-toting, airplane-flying hunters from slaughtering most of them. 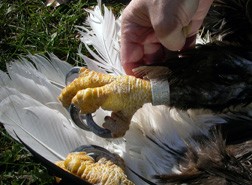 The banded leg on this Bald Eagle illustrates its huge size.

Being essentially a “sea eagle,” the very best place in North America to see a lot of Bald Eagles is the coastal region of southern Alaska. Wildlife biologists and Eagle photographers drool over a 10-mile stretch of the Chilkat River in lower Alaska, where 3,000 to 4,000 Bald Eagles congregate in mid-November to feast upon dead salmon.

What a varied animal diet the Bald Eagle has, ranging from road kills of Cottontails to White-tailed Deer, stunned fish in the downstream waters at power dams, turtles, crippled waterfowl in fall and winter, poultry and even a few wild birds. Several years ago during the winter, I photographed an immature Bald Eagle feasting on a stillborn calf that a farmer had thrown onto one of his fields west of Jacksonport.

As large and powerful as the Eagle may be, I look at it as our canary in the miner’s cage, a good indicator of the overall condition of our environment. Several things can be done to help the Eagle. Stiffer penalties and better education will slow down the killing of especially immature Bald Eagles by irresponsible, uneducated, itchy trigger-fingered hunters. 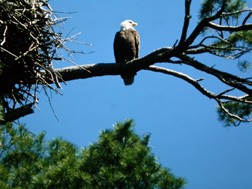 An Eagle at least four years of age is perched near its nest.

Becoming increasingly difficult to accomplish is the preservation of large open spaces where these birds can nest unmolested along large lakes and estuaries. The return of these birds to nest in Door County was slower than in inland areas due to the comparatively larger amounts of DDT, used especially on orchards, draining into Green Bay and Lake Michigan and badly contaminating the prey fish. As recently as 1995 there was only one known pair nesting in our county, along the east shore of the Toft Point State Natural Area. Today between 15 and 20 pairs nest in Door County. Vilas County in northern Wisconsin has at least 144 active Eagle nests.

People must be taught to stay away from an Eagle’s nesting site – a thousand feet is too close. These birds do not get along well with people’s activities. Of course there are a few exceptions to this general belief, but the wilder and more isolated the land remains, the better the Eagles like it, especially if sturdy tall White Pines grow there near the shore.

If you want a glimpse into the past, visit Wyalusing State Park at the confluence of the Wisconsin and Mississippi Rivers. There you can see the monument to the Passenger Pigeon. Stand there drinking in the breathtaking panoramic grandeur of these two stunning river valleys, imagining the unbelievable flocks of millions of Passenger Pigeons literally darkening the skies. All the Pigeons are now extinct, and think to yourself what you as an intelligent thinking human can do to prevent this from ever happening to the mighty Bald Eagle. This is not a one-person job; everyone’s got to help. In the meantime, enjoy our county’s Eagles.