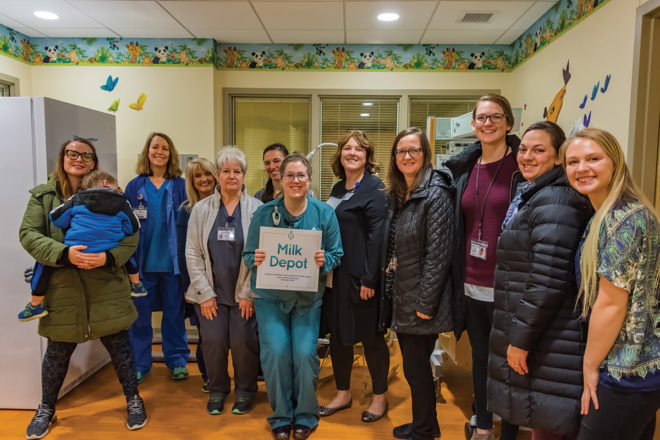 Jessica Skinner wants new mothers to know that they have a very special gift to give: Their breast milk can benefit newborns in Door County and provide a powerful choice for other new parents in our community.

Skinner, a registered nurse in the labor and delivery unit at Door County Medical Center (DCMC) and an international board-certified lactation consultant, is the driving force behind the new breast-milk depot at DCMC. In partnership with the Mothers’ Milk Bank of the Western Great Lakes, DCMC now offers donors’ breast milk to inpatient newborns and is a site for women to drop off breast milk that they wish to donate.

Skinner said that the reactions she receives when she talks about donor breast milk range from “Eeew, gross” to complete shock that it’s even available.

“We haven’t always done a great job of sharing the challenges [of breastfeeding],” Skinner acknowledged. “We sort of have a rose-colored view of what breastfeeding is. What I’d really like to do is destigmatize the ways that we feed our babies in every respect.”

Traditionally, parents have had two choices when it comes to feeding their newborns: human milk from the mother, or formula. Skinner points to overwhelming medical consensus that human milk is best for babies, but she’s quick to add that formula is a fine choice. She said she always tells her patients that although breast milk is best, “… it may not be best for you.” The difficulty comes, she said, when a mother has chosen to breastfeed but is unable to do so.

“It is heartbreaking to me when moms feel like they’ve failed because, for whatever reason, feeding baby at breast with their own milk either isn’t currently an option, or in some cases, will never be an option for them,” she said. For those parents, feeding their baby donated human milk can provide an option other than formula that may feel closer
to their original decision.

Skinner explained that sometimes mothers’ milk supplies are low, or they’re unable to breastfeed at all because of their own illness or postpartum complications. In other cases, newborns may have conditions such as low blood sugar that require them to take in more milk than their mothers are able to produce.

No matter the reason, Skinner explained that using human donors’ milk is typically a short-term occurrence, providing a bridge until a mother’s supply is adequate or a baby no longer needs supplementation.

Although the concept of donated human milk for babies may be new to some, it’s been in practice for more than a century. According to the Mothers’ Milk Bank, banking human milk dates to 1911, when a Boston hospital started collecting and dispensing human milk after contaminated water and cows’ milk were causing disease in infants.

In 2005, the Mothers’ Milk Association of Wisconsin formed to provide pasteurized human donor milk to babies in our state, and in 2011, it joined with a similar Illinois organization to form the Mothers’ Milk Bank of the Western Great Lakes. Today it has 22 depot sites throughout Wisconsin.

Milk depots such as the one at DCMC send the donated milk they receive to the milk bank to be batched and pasteurized; then they receive a supply back to have on hand for inpatient newborns whose parents request it.

Nicole Robbins, the Mothers’ Milk Bank education and outreach specialist, noted that much of the donor milk is distributed to hospitals with high-level neonatal intensive-care units.

“Sometimes those babies have a hard time digesting formula,” she said. “Having human milk on hand is very useful for them.”

Robbins said that since the Mothers’ Milk Bank opened in 2011, more than 600 Wisconsin women have donated milk. Skinner likens breast-milk donation to blood donation, and she hopes that Door County women who are able to donate milk will now do so.

“It’s literally giving life,” Skinner said. “I can think of few things that are a more giving act. A woman donating breast milk to another woman is literally donating a part of herself. It’s one of the most powerful things I can think of.”

Skinner is an efficacious advocate and resource for her patients. Her accreditation as an international board-certified lactation consultant puts her in the top echelon of lactation experts. Only about 30,000 people in the world have put in the 1,000-plus extra hours of coursework and supervised care to qualify for the certification exam. For Skinner, it’s all about putting that knowledge to work.

“Part of my job as a nurse is to alleviate suffering, and suffering occurs in lots of little and big ways when you have children.”

With the milk depot, Skinner has given Door County parents a new option for feeding their babies. And possibly more importantly, she has created a giving opportunity for new mothers: a powerful way for them to support each other and our county’s youngest residents.

Women who want to donate milk can visit milkbankwgl.org to fill out an interest form. After a short telephone interview with a milk-bank staff member, prospective donors will then be asked to complete an application and get a blood test (at no cost to them). Once approved, donors can drop off their donated milk at DCMC.