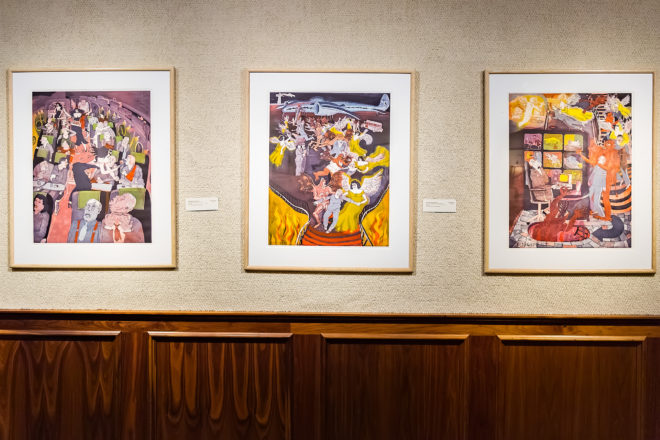 First up is the exciting, new exhibit, Extraordinary Things: Wisconsin Surrealism in the Permanent Collection – the first exhibition for new curator Helen del Guidice, a Chicago native who comes to the position from a museum gig in New Orleans.

“This is Helen’s first exhibition with us, so it marks a very important time for the museum, too, with new curatorial leadership,” said Elizabeth Meissner-Gigstead, the museum’s executive director. “She really took the concept that our previous curator had in rough form laid out and put her mark on it.”

“It was a great opportunity for me to get into the collection and see what we have,” del Guidice said, adding that she was impressed by the breadth of choices in the collection for this impressive show.

Forty-four works by Wisconsin artists – a quarter of those representing Door County – are featured in Extraordinary Things. Meissner-Gigstead and del Guidice understand that not all of the artists represented could be considered surrealists, but, as del Guidice says, they certainly “play with the tools of surrealism.”

For example, they tell the story of Door County artist Thomas DeMint viewing the exhibit recently and being surprised to find his oil on canvas “Winter Fog, Sturgeon Bay” among the works.

But it is obvious when you see it – it has the eerie stillness of surrealism.

“He was, I think, completely flattered that we were looking at his work in a different light,” del Guidice said.

Sometimes, she explained, it’s about context. “Suddenly it has a different voice, depending on what you put next to it.”

That juxtaposition is particularly obvious in one corner of the exhibit where the depiction of a suburban neighborhood – comprising maddeningly similar “little boxes made of ticky tacky” and antiseptic landscaping (a dandelion wouldn’t stand a chance) – across the wall from a trippingly folklorish paean to dandelions.

With the works in this exhibit, and surrealism in general, del Guidice said, “You can’t count on any one element to be honest with you. It’s playing with what you expect and what reality is.”

Extraordinary Things will run through Sept. 16. While it’s going on, another big thing is happening: The museum is expanding with the Gerhard CF Miller Wing on the museum’s Ruth Miller mezzanine. Gerhard Miller died in 2013 at the age of 100, but his work will live on in the new wing.

All these things are part of the master plan, as Meissner-Gigstead put it, “to make the museum more engaging and create a bigger impact in the community.” Being inside the public library also offers the opportunity to bring in first-time museum-goers, she added.

An average of 30 to 40 school groups visit the museum throughout the school year for a program during which “Miss Beth” reads for 30 minutes, followed by 30 minutes in the museum. Meissner-Gigstead said they hope to enhance that experience very soon with interactive educational experiences such as printmaking.

“The kids love that, and the interaction enhances the learning,” she said.

Future additions to the 1,200-piece collection of Wisconsin artists will focus on bodies of work rather than individual pieces, Meissner-Gigstead said.

For example, she mentioned Door County artist Charles “Chick” Peterson, who is also represented with a beautiful, large canvas in Extraordinary Things.

“In the last couple of years, we’re really starting to home in on Chick Peterson,” she said. “We’re really beginning to fill in the gaps of Chick’s work.”

And there is the recent acquisition from the Kohler Foundation of 70 works by three Wisconsin artists, including 28 pieces by John Colt, who is also represented in Extraordinary Things.There are hopes to snag a grant to continue the museum’s effort to digitize its collection. But don’t wait for that. Visit this little gem. Take a kid to the library while you’re at it. You can do both in one place.

From New Orleans to Sturgeon Bay

Helen del Guidice, new curator at the Miller Art Museum, has been working in museums for 20 years, launching three new ones along the way.

Prior to coming to the Miller on June 10, she served nearly three years as director of the New Orleans Museum of Mardi Gras Costumes and Culture.

“I was recruited to design and build a museum for a local collector,” she said. “He was a businessman who had a collection of about 30,000 carnival costumes dating back to the turn of the century. He wanted to put them in a museum setting, so he had hired me to basically conceptualize the museum, and design and curate the museum, literally build it. We hired a crew of carpenters and built it.”

In its conception, del Guidice said she decided to take a slightly different angle from a typical museum by focusing on the culture of Mardi Gras, with its history as a sort of sidebar in offerings.

“I designed it as a contemporary art museum,” she said. “It was very much what is happening now, along with historically relevant content. I designed and scripted a 45-minute docent tour that went over the history of carnival, how it began, how it made it to America, how it has become what it is and how it’s changing today.”

“Beautiful costumes,” del Guidice said, “the vast majority of which were locally made in New Orleans by New Orleans artists.”

When she felt she had gotten the Mardi Gras Museum on its way, she started a nationwide job search and decided on the Miller way up north in Sturgeon Bay, even though she had once vowed never to return to the Midwest after leaving her native Chicago for eight years in Rome.

But, she said, the Miller “really had what I was looking for. Both the area and the museum were very appealing to me.”