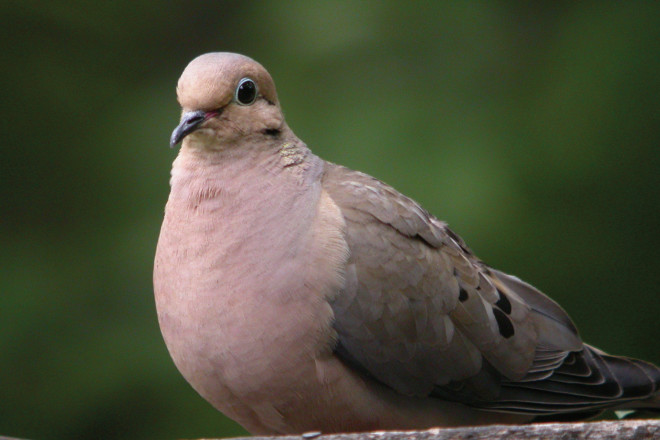 What a delightfully peaceful atmosphere the Mourning Doves provided for us while we were growing up in the small city of Kewaunee, Wisconsin. They’d perch on the power lines high above our backyard and sing non-stop, a gentle “oh WHOoo who who.”

It was when I was cutting the large lawn at my mother’s cousin John Cmejla Proctor’s home, using a push-mower, that the Mourning Dove’s vocalizing became a favorite of mine. The sleek, streamlined appearance of the foot-long body was enhanced by its pinkish-gray color and subtle bronzy, pink and violet coloring of the top and sides of its neck. Prominent white tips of its tail feathers were accentuated when the bird was in flight and its tail was fanned into a long, V-shaped wedge outlined in white. What a beauty.

As I think back to those days with the peaceful, shady expansiveness of that beautiful yard and its towering shade trees, that site would have been incomplete without the Mourning Dove music. Fortunately many other people must enjoy them as I do because this is the only bird that lives in every state of the union, except Hawaii.

If someone would have told me then that in later years this dove would be classified as a game bird and shot by hunters, I wouldn’t have believed them. Today they are hunted in 42 states, including Wisconsin, with 20 to 40 million Mourning Doves shot in the U.S. each year. Perhaps you will feel better when you learn that other sources of mortality, including predators, disease, accidents and weather extremes, are greater factors than hunting in Mourning Dove mortality. Between 8 to 15 percent of Mourning Dove mortality in the eastern management zone results from hunting.

Even though the names pigeon and dove are used interchangeably they do have individual characteristics setting them apart. Pigeons tend to be larger, chunkier and have square or rounded tails. Doves have longer pointed tails, and they tend to be sleek, smaller and more graceful in flight. More than 280 dove species inhabit various countries of the world. 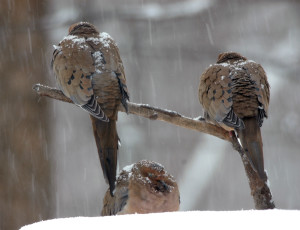 Occasionally a White-winged Dove shows up in Door County. Several people saw one that found a feeder southeast of Sister Bay on December 5, 2007. This is mostly a resident of the Southwestern U.S., common in the Sonoran Desert Region. On average they are about two inches smaller than the foot-long Mourning Dove. The terms “pigeon” and “dove” have no technical significance and are used interchangeably throughout the family.

The rarely seen Eurasian Collared Dove has a black half-collar at the base of the neck. These birds, which made their way to Florida in the 1980s, were first introduced to the Bahamas. They are rapidly colonizing most of North America. Bird feeders and trees planted in urban and suburban areas have helped these prolific breeders to become well established. One was seen near a feeder at a home about three miles north of Baileys Harbor on October 9, 2009.

The Mourning Dove’s swift powerful flight would lead me to think that it weighed more than the four ounces it really does weigh. The first Mourning Dove I handled taught me a thing or two about its power. Friends of mine northwest of Green Bay were feeding more than 70 of them every morning one early spring along with dozens of Purple Finches and Evening Grosbeaks. It was quite expected that one or more would be unsuspectingly captured in my small bird banding nets.

What a powerful handful of bird I had when I removed the first one from the mist nets. Surprisingly a couple of the birds I examined were missing all or most of their toes on both feet. Strangely, however, they appeared to be in good health. Perhaps the most accurate guess would be that they were victims of a type of foot disease, one of several quite common to birds.

A few years ago in winter one of the doves would quite often land on the deck railing right outside from where we sat indoors eating. What surprised us was that bird had just a toe-less stump for one of its feet but, nevertheless, appeared to be getting along quite well. It was very fitting that here was a well-marked bird (minus a foot) that we could follow for several consecutive weeks as it apparently was fond of perching on our deck, actually quite close to its food, the cracked corn we were scattering along the edge of our front yard.

It wouldn’t surprise us to learn that the Mourning Doves that we see here in winter nested considerably to the north of Wisconsin. Strangely those that nest farthest north migrate farthest south, as determined through banding studies.

G. J. Wallace, well-known Michigan ornithologist in past years, states in his book An Introduction to Ornithology that there is a very small flow of blood in birds’ feet during cold weather and that it is barely sufficient to maintain feeling. We were somewhat relieved after reading that, hoping that those doves lacking toes or entire feet were not suffering too much.

I can easily imagine some people calling these well-loved birds “whistle wings.” Their relatively long wings, powered by strong breast muscles, can produce some exquisite whistling music. Apparently the birds can control this because it is very common to see them flying at times without the slightest hint of a whistling sound.

Their manner of breaking their flight by fanning their wings and tails as they come in to feed thrills us to no end. What beautiful 5½-inch long tails they have. Their outer tail feathers are about half gray and half white with a black patch separating the outer white half from the inner gray half.

A few of our close friends refer to these birds that mate for life as “Turtle Doves,” most likely a localized name where these folks grew up. This name is from the Latin, “turtur,” the species name of the similar Turtle Dove of Europe.

The Mourning Dove is one of the earliest nesters of songbirds in Wisconsin and has one of the longest nesting seasons, April to September, with the peak of nesting being from May through August. They are very prolific birds with each pair producing multiple clutches each year with each clutch having no more than two eggs. However, due to the very flimsy nests they build, quite a few eggs are lost along with young, which, being quite large for their age, can’t seem to stay safely in the weak nest. Unlike most birds, both sexes produce “crop milk” to feed the young, which are called squabs.

These vegetarian birds consume great quantities of waste grain and weed seeds. Surely their numbers today are far greater than during pre-settlement days. They have proven to be especially compatible with rural people of North America. Large-scale farming practices, using modern equipment, leave considerable quantities of so-called waste grain lying in the fields. Many species of weeds, rich with edible seeds, have also been introduced through farming, all helping the Mourning Doves and many other creatures to survive. Undoubtedly the doves are not mourning these wasteful practices.

The more I think of it, the more I feel that the Mourning Dove would have been the perfect choice to be our national bird. Unlike the Bald Eagle which nests in relatively few states, Mourning Doves nest in every state except Hawaii. We fervently hope the day never dawns when the last Bald Eagle will have made its final soaring flight into the realm of extinction. Just in case though, to be on the safe side, what do you think about the idea of choosing the All American Bird? My vote? Without a doubt, the Mourning Dove!