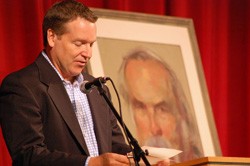 Christopher Blei talks about his father during the June 29 remembrance held for Norb Blei at the Peninsula Players Theater.

A somber solo saxophone played over the sound system as people drifted into The Peninsula Players theater the soft, sunny morning of Saturday, June 29, to remember Door County icon Norb Blei, who came to Door County from Chicagoland, first to write in solitude, then to write about the places and characters he came to know here, until, finally, as his friend Pastor Michael Brecke of St. Paul Lutheran Church in Juddville, pointed out at the remembrance, he became a Door County character himself.

Tears were shed for the writer/raconteur who died on April 23 at the age of 77, but there were many more smiles and much more laughter shared as family and friends remembered Blei as a multi-faceted character – father, friend, teacher, seeker, mentor, big breakfast maker, professional curmudgeon, advocate of walrus mustachios, but, most of all, writer.

It was also Pastor Brecke who pointed out just how much writing meant to Blei by quoting from his gravestone:

Find me in my books

“There is the soul of a poet as well as a journalist at large in these pages,” a Chicago Tribune reviewer wrote about Blei’s 1994 book Neighborhood, which was the second in what has come to be known as his Chicago Trilogy, beginning with The Ghost of Sandburg’s Phizzog (1986) and ending with Chi Town (2003).

At the remembrance, award-winning Chicago broadcaster Marty Robinson offered a glimpse of the early Norb Blei, the Chicago journalist who rubbed shoulders with the likes of Royko and Terkel. He invoked the names of earlier Chicago writers Carl Sandburg and Nelson Algren, and suggested that Blei was their worthy successor.

Marianne Ritzer, Alice D’Alessio and Albert DeGenova spoke separately about Blei the teacher. All three met him as writing students at The Clearing, where he annually served a week as writer in residence. Each described admiration for Blei’s dedication to writing and to teaching, and each talked about going on to become Blei’s friend and colleague in writing. DeGenova stepped in to conduct Blei’s weeklong writing class at The Clearing this year.

The importance of The Clearing in Blei’s life was iterated by more than one speaker, but especially by Tim Stone, who serves on the school’s board of directors, where, he pointed out the Norbert Blei Memorial Literary Fund has been established. Send checks to The Clearing, P.O. Box 65, Ellison Bay, WI 54210 attn. Tim Stone.

Annika Johnson, dressed in the traditional Swedish style that Al Johnson’s Swedish Restaurant is renowned for and carrying a little goat named Beelzebub, talked about Blei as a longtime customer at the restaurant’s coffee counter and as a friend who always remembered her birthday. She presented Blei’s family with a self-portrait Blei had given to her, but that she thought now belonged with the family.

Blei’s daughter and son, Bridget Buff and Christopher Blei, brought out a side of him that only children can, talking about the giant breakfasts he would make, his love for the music of Jimmy Buffett eventually morphing into a love for jazz and public radio. Christopher read a touching piece his father had written for the Chicago Tribune back in the 1970s about Blei’s thoughts on what lies ahead for his own son.

Three sets of music were provided, first by Jeanne Kuhns, who sang her own “A Song for Norb,” Julian Hagen, assisted by Kuhns, on his “Northern Light,” and the remembrance ended with a group sing led by Big Mouth guitarist Jay Whitney and Pete Thelen singing a revised version of Robert Johnson’s “Sweet Home Chicago,” with a chorus dedicated to Blei that went: “Hey Coyote, don’t you wanna go…back to that same old place, Door County?”