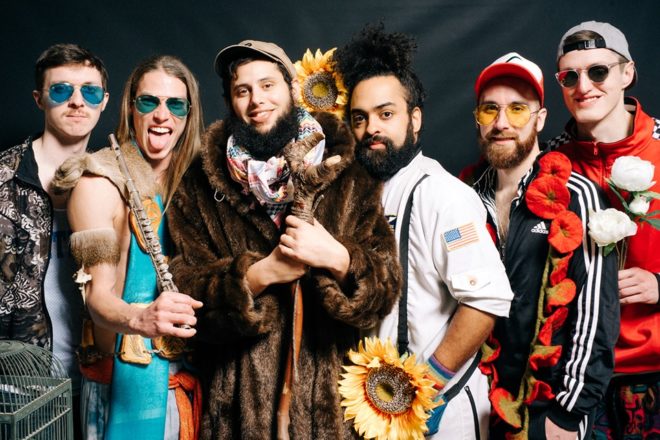 Door County Brewing Co. Taproom and Music Hall will get a splash of color on June 22, 7 pm, when Joe Hertler and The Rainbow Seekers hit the stage. Submitted.

Door County Brewing Co. Taproom and Music Hall will get a splash of color on June 22, 7 pm, when Joe Hertler and The Rainbow Seekers hit the stage.

The six-member group – an amalgamation of three college bands – formed around 2012. In its early days, its members were working on hip-hop beats for pro football player T.J. Duckett, which led to their namesake. While working on music, an album displayed in the extensive collection – Rainbow Seeker by Joe Sample – caught the eye of frontman Joe Hertler.

“I said something to the likes of, ‘If we’re ever a band, we should call ourselves the Rainbow Seekers,’” Hertler recalled. “T.J. agreed that it would be a cool name, and if T.J. says something is cool, then it is definitely cool. About four months later, it would be cemented as our band name.”

Although the band’s albums have a chill-summer-ride-in-a-car vibe, its live shows are high-energy throughout – which makes sense because one of the most important aspects of the band is its live shows.

“I hope that people – beyond simply being entertained – find a feeling of connectedness to both those around them and to those of us on stage,” Hertler said. “The goal of music is to bring people together through a shared experience.”

This commitment to connecting with fans is reflected in an unusual offering on the group’s website: a dinner date with The Rainbow Seekers. For $250, you can grab dinner with the entire group at a location near the performance venue. Act quickly, though – there’s a limit of only one dinner date per city.

Although Hertler was initially against manager Irving Ronk’s dinner-date idea, he warmed up to the concept because of the supportive friends the band has made along the way.

“They invite you into their lives and in some ways become your away-from-home families,” Hertler said. “Those people give so much meaning to what we’re doing, and maybe the dinner-date thing can introduce us to more of those people.”

And what keeps the fans going back for more? The Rainbow Seekers’ dynamic music and performances. The group describes its music as a ride that “… will take you across the mountains of Motown, through the fjords of folk, over the archipelagos of Americana and – at last – into a funky firth, where only the fiercest of friendships can be found.”

I can attest to all of these claims. My first experience with The Rainbow Seekers was a private concert for a birthday party. The group’s infectious energy transformed even the most shy person (me) into a dance machine. This energy transported the party-goers to places unexplored, where we could be whoever we wanted, and just enjoy the ride along the way.

The group has produced four albums. Its latest, Paper Castle, was released May 31. The 12-song album traverses groovy tunes, heartfelt crooners and toe-tappers for all occasions. It also takes a positive look at some not-so-positive emotions.

“The album [Paper Castle] plays on themes of impermanence and the celebration of solidarity through our private struggles,” Hertler said.

This theme is most present in his personal favorite from the album, “Passing Through.” In it, he sings, “Maybe I’ll lose my shit tomorrow, give way to all my sorrows, but today is not the day to fall apart.”

All in all, the group’s powerhouse vocals and instrumentals create a show that is not to be missed.