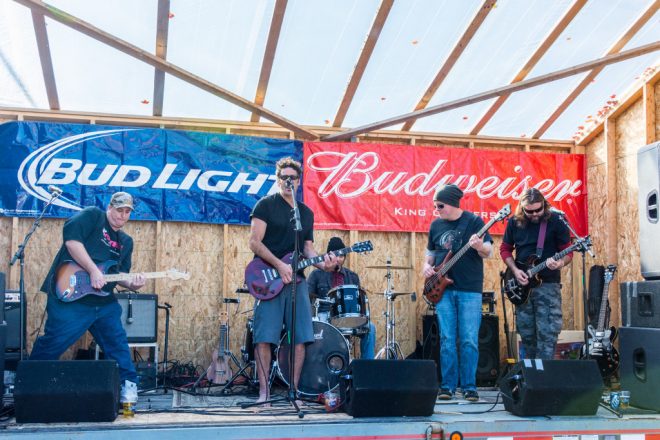 Your weekend rundown of who, what, where and when to catch live music in Sister Bay this weekend.

Glashamr starts the day with rock covers under the back tent at Husby’s, 12-3 pm, after which the party moves inside with Modern Day Drifters playing country music inside – if you can squeeze your way in.

If you prefer to keep your revelry outside, catch the blues of the Big Mouth Trio at Stabbur, 3-6 pm, followed by the big show with the Power Tool Horns, 6-10 pm.

Looking for a more chill scene? Head to the Sister Bay Fire Station, where polka king Jerry Voelker and the Jolly Gents play at 4:30 pm.

Back up the hill, Sneezy – a Chicago-based rock and funk soul band – returns to get the crowd dancing outside in the Husby’s Garage back tent, 6-9 pm, with riffs on classics and hip-hop.

Down the street at Door County Creamery, Annex plays the back tent, 7-10 pm.

Hoi Polloi will get you dancing when the band takes it home for the late-night crowd at Husby’s beginning at 10 pm. The band covers a wide range of dance-inducing tunes, from Sublime to Bob Marley to the Red Hot Chili Peppers, plus originals.

If you made it through the Friday music marathon, Saturday will challenge your stamina.

You won’t have time to sleep too late. Down at Stabbur, dance and sing along when The Cougars get the party going early at 11 am. Led by three female vocalists, you’ll hear everything from Lady Gaga to Journey.

After the parade, Sneezy returns to the main stage between the Sister Bay Bowl and Husby’s, 12-4 pm, for those looking to dance in the street. The Glam Band – six guys who love ’80s hair metal – bring it at Door County Creamery, 12-3 pm, and Jerry Voelker and the Jolly Gents entertain at the Dörr Hotel.

Solomon and Sten play at Grasse’s, 12-4 pm, and the Scotty Meyer Trio is back on the deck at Boathouse on the Bay at 12 pm.

At 3 pm, the Modern Day Drifters play again – this time at Stabbur – and the always-popular Unity plays reggae at the back tent at Husby’s at 4 pm. Kevin Johnson, formerly of the legendary local band the Mullet Hunters, returns to Fall Fest for a solo gig at the Boathouse, 5-8 pm.

Whiskey Ditch is back to bring the rock at Door County Creamery with the Paul Hanna Band, 3-9 pm, and Hoi Polloi will pull the late shift again at Husby’s, taking the stage at 8 pm.

The music fades Sunday, making room for the Packers as they play the Bears at 12 pm. Celebrate postgame with Frank Maloney and His Big Country Unit at the Sister Bay Bowl. Frank’s voice should be in fine shape when he takes to the mic at 3:30 pm, at the end of his typically mellow weekend.