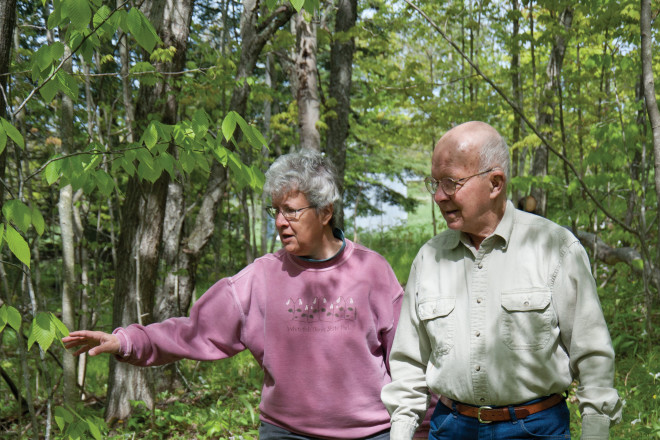 Roy on a hike with his “Partner in Nature,” his wife Charlotte. Photo by Len Villano.

When people in Door County want to know more about what’s growing in the woods behind their home or about the birds that chirp so early in the morning, they don’t always turn to a book. Often, they consult the local field guide. They call up Roy Lukes.

Lukes, along with his wife Charlotte, is a well-known Door County naturalist. He’s published five books, is a member of many environmental organizations and this week he published his 2,501th article about Door County nature – Door to Nature:  Eastern Hemlock Tree, here.

Lukes grew up in Kewaunee, and after graduating high school spent the next few years working in a factory and playing trumpet in a traveling dance band to earn money for school. When he graduated he was drafted during the Korean War, and was sent to Fort Sill, Okla., to test artillery. 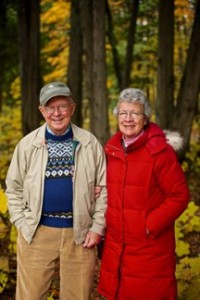 “Someday we might be killing thousands of people with that gun, and that weighed on me,” Lukes said. “I think after the service that was a pretty big factor in wanting to go the opposite direction of war. I’m a strong pacifist today. I wanted to be working with peaceful things and I think nature was a good choice.”

When Lukes returned from Oklahoma, he taught science at a number of schools around the state and got a graduate degree from the University of Wisconsin – Madison. He eventually returned to teach in Algoma, then in 1962 was offered a summer position at The Ridges Sanctuary as a naturalist and tour guide.

He then got a job teaching in Door County, and moved into the Ridges Range Light in 1966. He met Charlotte during a tour at the Ridges in August 1971, and they were engaged on Jan. 1, 1972.

Carol Thompson sat down with Roy to talk about his life, his work and the land to which he’s dedicated both.

CT:  What do you hope readers take away from your articles?

RL:  I feel too many people are simply ignorant of their surroundings, of the wildlife, of the plant life, and my goal is to try to get people more aware of what’s living with them in a community. The more people get to like these things, the more they’re not going to want to miss them, so they’ll pitch in and help become a better steward and take care of the land.

CT:  What other writing has influenced yours?

RL:  Ever since I started college I realized if I was going to be teaching young people – I was dedicated to become a rural school teacher then eventually an elementary teacher – I’d better know a lot about the environment, about wildlife. I started building my own library. The more books I attained, the more favorites I had, the more good references I had at my hand, and these invariably helped a lot in my stories, too.

I have several very favorite authors, many old, dating back a long time, but one of my very favorites is Edwin Way Teale. He was a nature writer much the same as I am today.

Probably one of the greatest naturalists to live and write in this country was Ernest Thompson Seton. He wrote very widely, I have about all the books he ever wrote, mostly amassed from used bookstores.

[I recommend reading] Wild Animals I Have Known. It’s about some of his favorite animal experiences. Back when I taught junior high, I quickly learned that those kids liked to have somebody read to them, and I like to read, I put a lot of feeling into it. That was probably the most favorite book of all that I read to them.

CT:  What draws you to teaching, whether in a classroom or through your writing? What inspires you to work so hard?

RL:  I guess I like to see excitement come over people’s faces when they learn something new, naturally about nature, which is my field.

Probably the main inspiration through the years has been feedback from people who read my stories. I get a lot of it, and it has been an ongoing inspiration. We get lots of phone calls, a lot of emails, people knocking at the door coming to see if I can identify what they found in their woods.

When you get the feeling of really helping people, that’s an important thing in life. It’s satisfying, it kind of spurs you to keep on doing it. 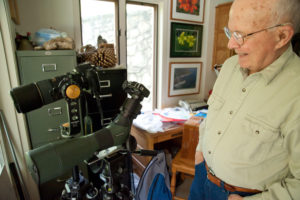 Roy Lukes shows off some of his photo equipment. The revered nature writer may be as talented with a camera as with a pen. Photo by Len Villano. 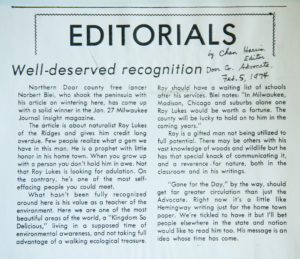 CT:  How do you keep all your information organized?

RL:  Look around you. I’m a very good observer, unfortunately my hearing is shot from the Korean artillery, but I still see very well.

There’s one thing I’ve done for many years. We buy a ream of white cardstock and I cut them in half. I have one at one of the meals [I eat] at the table every day of my life, and I make an entry of things I’ve seen that day – wild flowers in bloom, the last of this, last of that, and I file them every month. I can go back 15 years ago and take my notes out and see what I should be seeing in November. That has helped a lot in my writing – phenology, I call it.

If I choose a subject [to write about] I want to see what I’ve written about it already, and sometimes I haven’t written about it at all. I look up my stories and sometimes glean from those… Sometimes one story is built on past stories you’ve done. I always look to bring in as much as I can, current sightings and current experiences with what I’m addressing in my story.

CT:  Have you noticed any trends over your years of tracking phenology?

RL:  Probably the most noticeable trend has been the terrible decrease in quite a few bird species. The numbers are not near what they used to be when I began birding in the mid-1950s.

CT:  What are your environmental concerns?

RL:  The very noticeable changes in forest types in Door County alone in certain species of trees. The American Beeches are destined to pretty much be dead in Door County in 10 years because of this white beech bark disease. Hemlock are not reproducing at all because of deer eating all the young as fast as they come up. Maples aren’t reproducing because of the deer, and porcupines are far too numerous and they’re wrecking the hemlocks.

I won’t see it in my lifetime but within 20 or 30 years there are going to be a lot of huge changes in the forest. When you remove trees that have thick canopies that allows a lot of light to the ground. That builds up a thick fern bed that crowds out many different plants. I’m a member of The American Forest Foundation and get their magazine. I think the comment was made in there that within roughly 40 to 50 years Wisconsin forests are going to be like the forests are today in Missouri. As global warming occurs it’s getting warmer and warmer. 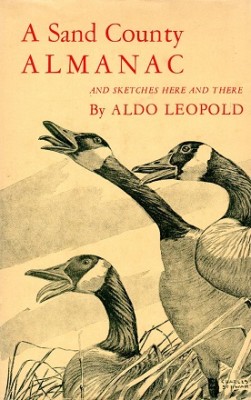 CT:  What would you consider required reading for budding naturalists?

RL:  It’s not an easy book, but the book I have recommended to so many people through the years is Aldo Leopold’s A Sand County Almanac. That’s a great, great book. It’s such a strong basic book in exciting people to the world around them, in a sense. He was able to make such wonderful associations in nature and write elegantly about them. I’ve written a couple of stories emphasizing the works of Leopold. I wish I could have met him, but I met all of his children.

CT:  Can you tell me more about Door County as a nature destination?

RL:  We can be very proud in Door County of the good quality natural areas that have been preserved. We’re great backers of the Door County Land Trust, for example, and of The Nature Conservancy. We have fabulous state parks in Door County, we have far better county parks than most people realize.

I think we have far more good areas in the county than any county in the country. There are so many and because of the topography of the county we have such different environments, from the high bluffs on the lake to the low shores of the lakeside and areas in between. It’s a fantastic study area.