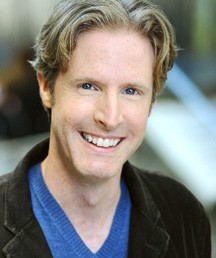 Paul Slade Smith is playing the role of Willum in “The Nerd.”

On stage at Peninsula Players now through July 22 is Larry Shue’s comedy The Nerd. The play’s protagonist Willum has a promising career as an architect, devoted friends and, hopefully, a serious girlfriend. All is threatened when Rick, a man who saved Willum’s life in the war, but whom he has never met, arrives unannounced on his doorstep.

The Nerd’s cast is a mix of new and returning Peninsula Players who will be under the direction of Linda Fortunato, who directed last year’s hit comedy, The Fox on the Fairway. Returning to the Players’ stage are Lee E. Ernst, Sean Fortunato, Erin Noel Grennan, Tim Monsion, Karen Janes Woditsch and newcomers Paul Slade Smith and Bennett Rabach.

Patrons are invited to picnic and relax on the grounds prior to the performance.

Peninsula Players performs Tuesdays through Saturdays at 8 pm and Sundays at 7:30 pm, except for a 4 pm matinee July 4 and July 22.

Ticket prices range from $33 to $39; discount tickets are available for groups of 15 or more. For more information or to reserve tickets call 920.868.3287 or visit http://www.peninsulaplayers.com.