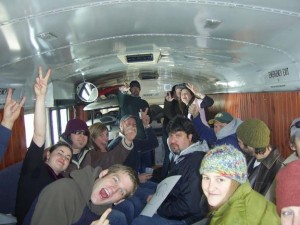 February in Northern Door can do strange things to a man. It may start after you’ve rented every last video from the nearby gas station. You’ve already spent an entire three days in your boxer shorts throwing pocket knives at your living room wall. Heck, even the Blatz and Hamms is starting to taste like yesterday’s Schlitz and Buckhorn. If something new and exciting doesn’t happen soon the white coats with the rubber truck will surely be knocking on your door.

Behold! Deliverance! Salvation! Those two beautiful syllables are being chanted from afar, growing ever nearer…chi-li! Chi-li! Chi-LI! CHI-LI! CHI-LI!! Yes! Throw away those knitting needles, it’s time for another Nor-Door Chili Run! Has it been a year already? Oh, it has! The legend (ahem) of last year’s chili run has had an entire year to stir up the emotions of those who partook and witnessed this new emerging social calamity. Another Super Bowl Sunday brings with it another day of mass chilicide! A wild mob of chili enthusiasts gathered yet again to take northern Door by the beans and restore honor to the term “gluttony.”

My Chili-Run Sunday ’08 began, much like last year’s, with a reheated bowl of left-over Rhythm Chili for breakfast. It was a practice bowl for the tidal wave of meat and beans to follow. By 11 am I found myself in Sister Bay’s Piggly Wiggly parking lot with a growing crowd of chili fans. Then, like a golden-winged chariot, Joel’s big blue bus rolled into the lot. A heavenly chorus of chili-chanting naturally ensued. The new destination sign was placed in the bus’ front display. It simply read FART. This year’s official chili-run rules were handed out to all 25 participants. 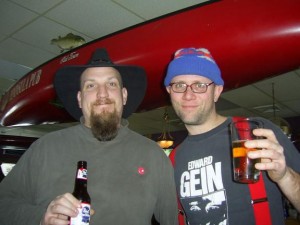 All the Chili-Runners were aboard, except for Ruckus Thomas. Our most veteran Chili-Runner and his wife are expecting a newborn any second, so he had to ride in his own chili truck. All riders of the Chili Bus were prepared to follow him down to the hospital chanting Ba-BY! Ba-BY! Ba-BY! Well, Chili-Run Sunday ended up not being a birthday, and Door Memorial’s cafeteria was spared an almost certain chiligeddon. This year’s chili buttons were handed out as we neared the first stop.

We marched into the AC Tap stomping and chanting. Waving our hand-scrawled chili signs and voicing our heartfelt mantra, all 25 of us filed in and the Nor-Door Chili Run ’08 had officially begun! The mob was soon appeased with many glorious servings of pipin’ hot chili! The chili was served with onions, cheddar cheese, sour cream, crackers, and five pitchers of a most mysterious sparkling golden liquid. Like a tornado, the mob inhaled every last drop and morsel we were served. We were quick out of the gate. Fuzzy excitedly ran up to me with squinting eyes. He made me officially experience the much anticipated First Toot! Did the First Toot see his shadow? Oops, one day late. Three cheers for Fuzzy.

The next stop was the Coyote Roadhouse. After another stunning entrance, we soon settled in for round two in this seven-event chilithon. The Runners were going strong. Each and every serving was frantically slurped up. Most of the Runners even finished the tantalizing tortilla bowl the chili was served in! The Chili Veterans all agreed that their recipe had been tweaked for the better from last year’s run. More spice, more meat, how can you go wrong? It was looking like we already had a front runner! Their delicious chili was also accompanied with, again, this mysterious golden sparkling liquid. Huh. In the interests of science and world peace, this liquid was welcomed and analyzed internally. Our chanting grew stronger…Chi-LI! Chi-LI! Chi-LI!

Back aboard the Chili Bus, we Chili Runners bonded in song. Our voices harmonized in beautiful chili carols as we neared the southernmost stop in this year’s run, the P.C. Junction! Our entire entourage seemed to morph into wide-eyed children as the train rolled out of the kitchen. Its precious cargo was serving after steaming serving of magical railroad chili! Never before had any of us seen such a sight. The train made run after run delivering load after load of red hot chili! It was, of course, delicious.

Seeing as how our next stop was simply across the street, the Chili Bus could take a break. Inside the Pen Pub, we were served chili family-style out of a large Nesco cooker. We found ourselves a good hour ahead of schedule so a bonus Rumpus Hour was awarded to all the Runners. The Chili Recess was spent shooting pool, trapping various Runners in the bathrooms, engaging in arm-flailing chili debates, and continuing with the scientific analysis of that mysterious golden sparkling liquid. 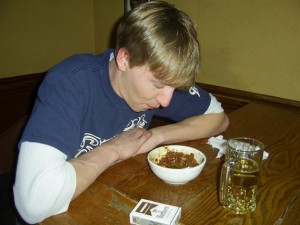 Next stop, Fish Creek – Chili Town USA! Same as last year, we marched an impromptu chili parade through the Fish Creek Market politely, yet earnestly, chanting our mantra. Next door, the Bayside Tavern prepared for the chili typhoon! We marched into the holy stadium that won last year’s best chili award. Here, we started picking up additional chili spectators joining the day’s festivities. Bowl, after bowl, after glorious bowl of Smilin’ Bob’s award-winning chili were soon slid across the bar into our trembling hands.

The next stop was another first for the Chili Run, a gas station! Back up in Sister Bay, we filed into the Mobil Sub-Express and filled the venue with chants for chili. Then, just as Allison entered, we all screamed, “Happy Birthday!” This particular stop was also chosen for Allison’s surprise birthday party! Let me tell you, gas stations are great for birthday parties! With party hats and noise makers, all the Chili Runners sang happy birthday while slurping down another glorious serving of most delicious chili. The Run was nearing its peak. 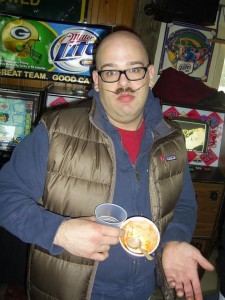 After the Chili Runners all departed the Chili Bus at the Northern Grill, our final chili stop, we attempted to make a chili runner pyramid for a photograph. Due to the ongoing scientific research with the mysterious golden liquid, our geometry appeared somewhat faulty…as did our pyramid. The attempt, however, was most noteworthy! Inside, the strongest of the herd rose above the rest. Only about half of the runners could attempt this seventh and final serving of meaty goodness. Some runners disbanded. Some stayed to watch the inevitable dethroning of the Patriots. As a card-carrying Vulcan devoted to nothing but science, I continued my research.

And so the Nor-Door Chili Run ’08 was completed. After the ballots were counted, this year’s best chili award goes to…(we have an upset!)…The Coyote Roadhouse! A very close 2nd place goes to both the Bayside Tavern and the Mobil gas station! Once again, all the chili at every chili stop was simply delicious and you can all be proud. This years Chili King, winner of the BIG SPOON, is none other than that high caliber chili-gulpin’ machine known as Adam Biwer! Congratulations Adam! Special thanks go to every one of this year’s chili stops. Three cheers to each and every chili run participant: Tonia, Jessie, Zack, Zack, Adam, Phil, Liz, Allison, Nick, Joel, Lauren, Tom, Jake, Fuzzy, Madeline, Myles, Jay, Robert, Laurel, Carrie, Chris, Nate, Nate, Stacie, and myself. Three big glorious toots of thanks go out to Joel for providing the chemical timebomb on wheels, the Chili Bus!