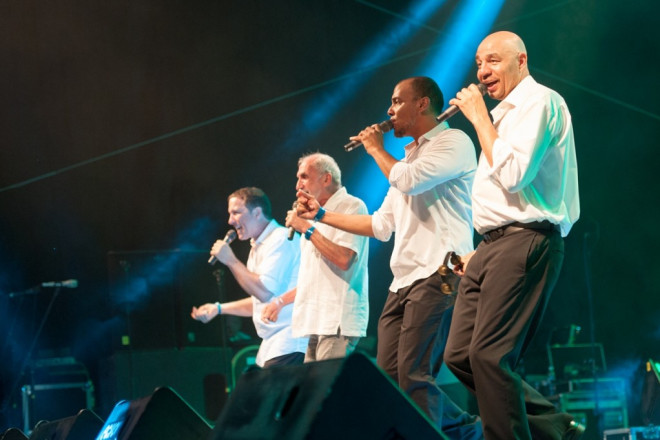 On Sept. 11 at the Southern Door Community Auditorium, recording artists The Nylons will stake the stage at 7 pm. After 35 years of performing and touring, The Nylons are on the road in their farewell tour across the United States. The a cappella group, most famous for “The Lion Sleeps Tonight,” has traveled the world over and was nominated for a Juno Award, is a recipient of a Tokyo Music Festival award and has seven combined gold and platinum records.

The Nylons were founded in 1978 in Toronto, Ontario, Canada best known for their covers of songs such as “Happy Together,” “Na Na Hey Hey Kiss Him Goodbye,” and “The Lion Sleeps Tonight.”

With seven gold and platinum recordings, this four-member vocal group is one of Canada’s top international success stories. The Nylons have performed more than 1,000 concerts in dozens of tours worldwide. Their first album went gold in only two months and eventually went on to become a Canadian platinum seller. The second album, One Size Fits All, was successfully distributed in the U.S. and became the foundation for their increasing fan base, which led to constant touring on both sides of the border.

The Nylons are renowned for their vibrant live shows, featuring dazzling harmonies, smooth arrangements, tight choreography, and fabulous showmanship. Their rapport with their audiences makes them perennial favorites for all age groups. Don’t miss this last chance to see The Nylons live at Southern Door Community Auditorium. Tickets are $15, general seating. For tickets or more information, visit southerndoorauditorium.org or call 920.493.5979.