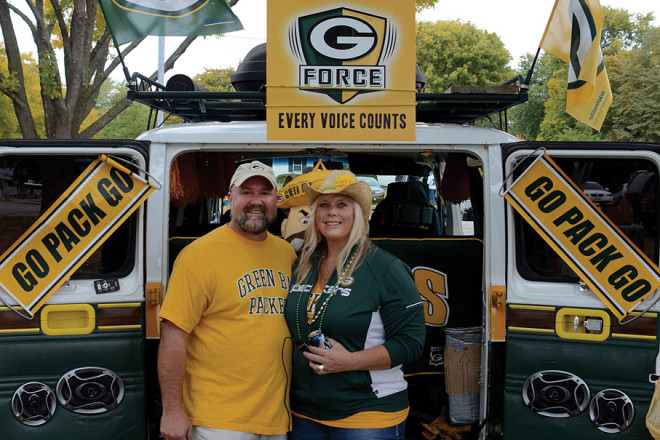 A gathering of green and gold clad Packers fans meet on a brisk October morning at the Sturgeon Bay home of Brian Frisque and Jen Jorns. It’s game day in Wisconsin. The Green Bay Packers, otherwise known as ‘we’ to Wisconsites, are playing the Jacksonville Jaguars at noon at Lambeau Field. 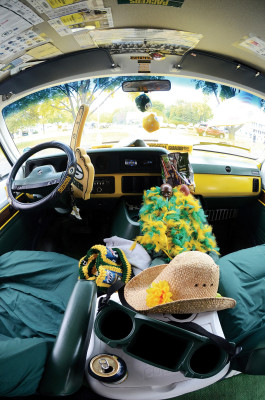 Frisque loads a 15-passenger, 1992 Dodge Ram conversion van – the Pac Van – an epic Packers-themed vehicle painted in green and gold, layered by Packers bumper stickers and insignias, with a silver grill and blue plastic cooler, while Jorns greets friends and family as they pile in.

On the open road, cans of Mountain Dew click open, granola bars and donuts dusted with powder sugar are exchanged as chatter fills the interior, lined with gold pom-poms and a string of light-up Green Bay Packers helmets.

Soon, Lambeau Field comes into view. “This is the best feeling ever,” says passenger Brett Anschutz as “Green and Yellow” by Lil Wayne thumps in the background.

“Riding up to Lambeau.”

When the van parks in its designated parking spot, just kitty corner from the historic stadium, veteran van riders do what needs to be done – cheesehead-sporting Amanda Weisgerber and Emilie Jorns-Frisque unload snacks while Adam Nelson, appropriately wearing a Jordy Nelson jersey, outfits the corners of the van with Packers flags. Shannon Wautier unloads Packers-themed foldout chairs while Frisque, after showing off glimmering replica Packers Super Bowl rings, sets up the grill.

“I guess it starts way back,” says Frisque, holding a half-eaten brat while speaking of his family’s Packers tradition. “My dad had tickets in section 104 and took me to games when I was a kid. And Jenny’s grandparent was Dick Weisgerber.” Weisgerber, who played for the Packers from 1938 to 1942, left his tickets to his family – including Jorns. 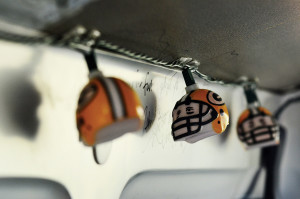 “And so when Jenny and I met, about 15 years ago, we kept the tradition rolling,” he says. The couple began attending games together, along with many family and friends.

“We would always go to all the games together and sometimes take two, three vehicles ‘cause we couldn’t pack everyone in one vehicle,” explains Frisque. “And we always had to discuss, ‘Who’s bringing the grill? Who’s bringing the food? Where we parking?’”

Opportunity came six years ago, while Frisque – a registered land surveyor – conducted a survey for a client. “He had this plain van that he was getting rid of. He owed me for the survey, and so I said, ‘I’ll take the van off your hands.’” Smiling as he points his brat at the van, he continues, “And we made this thing.”

Outfitting the van for its chief purpose, to transport Packers game-goers to and from Door County to Lambeau Field, began with the exterior. “My neighbor, Brian Knapton, painted [vehicles] for fun, as kind of a hobby,” says Frisque. “I went to him one day and said, ‘Could you paint it green and gold?’” 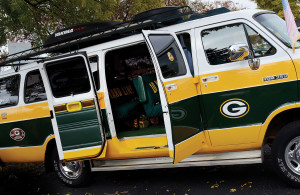 Knapton painted the exterior and continues to freshen up the body work, “So it doesn’t rust away to nothing,” says Frisque, who also credits Jeff’s Repair in Sturgeon Bay for “keeping up on repairs,” while family, friends, and a few Packers players “slowly built up the inside.” Jayne Sitte from Baileys Harbor sewed the seat covers, AstroTurf was laid on the floor, the windows were darkened, Packers signs and stickers were added, and over time an assortment of Packers players have gladly autographed the van including Colin Cole, Lynn Dickey, and Dave Robinson.

Frisque also convinced Clay Matthews to sign the van in Sturgeon Bay. “Clay Matthews was at Jim [Olson] Motors, and you could bring one item to have him sign. So I stood in line for about an hour and waited until it was my turn.”

‘I brought my one item, but I can’t bring it in the building.’

‘It’s too big to bring in the building.’

‘No, you don’t understand. 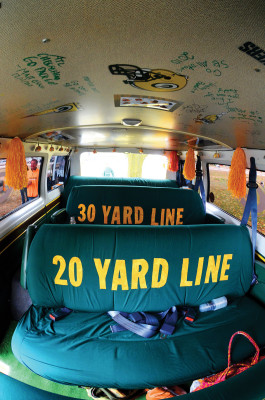 I can’t bring it through the door.’

Matthews stepped outside, saw the van, “and was like, ‘Wow. This is awesome!’” says Frisque.

“We all get to enjoy it,” says Jorns, who waitresses at Baileys Harbor Cornerstone Pub. The Pac Van allows everyone to travel together safely and have a designated driver. Jorns continues, “Everybody gets a great experience.”

The memories the van represents mean a great deal not only to its owners, but also fellow riders, such as Amanda Weisgerber, who married Jorns’ cousin Ryan Weisgerber outside Lambeau Field.

“I married into this wonderful Packers tradition,” she smiles. “It was great – we surprised our parents and the van picked us up at our house. And we came down and got married on a Thursday.”

She has enjoyed many Sundays outside Lambeau. “I just really appreciate every thing that Jen and Brian put into these days, ‘cause they don’t forget any details…from the green and gold silverware and plastic cups to so much more.”

The Pac Van has also received a great deal of attention from strangers and celebrities. “Dan Jansen, a speed skater, he wanted his picture taken by our van,” says Frisque, who also tells of Cuba Gooding Jr. smiling and waving at picture-taking onlookers from the passenger seat of a vehicle, spotting the van and bringing out his camera to take a picture. “I personally witnessed this,” laughs Frisque. “I was like, ‘Oh my god, Cuba Gooding Jr.’s got a picture of my van!’”

The van caught national spotlight with a segment on NBC Nightly News while in Dallas for the 2010 Super Bowl game. “They did a story about the terrible weather on the wa 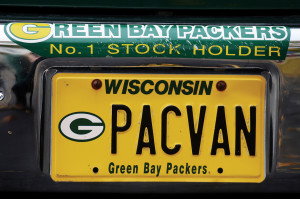 y to Dallas,” explains Frisque. “They interviewed us, and they interviewed some [Pittsburg] Steelers fans who made the terrible journey across Oklahoma, which was an ice-covered nightmare. When you see snowplows tipped over in the ditch, it’s a really good indication not to be on the road.”

But smaller acts of kindness and attention please Frisque and Jorns, who hope to “brighten the lives of somebody who’s future might not be that great,” says Frisque. Though the van is used to attend games for family and friends only, “pretty much anytime anyone asks for the van for a charitable thing we bring it right on down.”