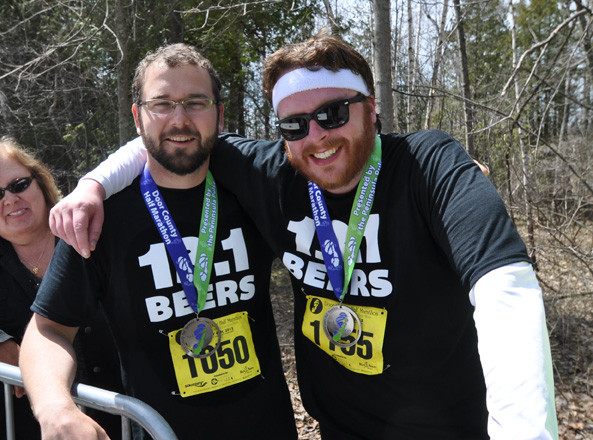 After watching his cousin Jake Nyberg complete the Door County Half Marathon in 2012, Lukas Willems made a commitment to join him in 2013. Photo by Myles Dannhausen Jr.

Some runners say that plunking down a registration fee is the best motivator to follow-through on your goal of running a distance race. But a group of Door County Half Marathon runners have found a more reliable method to go from non-runner to the finish line.

The morning after Jake Nyberg and his friend Erik Molin of Minneapolis completed their first Door County Half Marathon in 2012, they celebrated their accomplishment at Alexander’s Restaurant in Fish Creek with family and friends. As they chased down brunch with an ample supply of mimosas and beer, some of their crew suggested that finishing the 13.1-mile run wasn’t all that hard. After a bit of good-natured ribbing made its way around the bar, Nyberg’s cousin Lukas Willems confidently proclaimed that he would run the race in 2013.

“Yeah right,” his sister Rachel scoffed at her little brother, who at 240 pounds did not sport the look of a ready-made runner (to be fair, neither did Nyberg or Molin).

But Willems upped the ante. “Give me that guest check,” he said, and proceeded to write his commitment on the back of it. “We are running the Door County Half Marathon, May, 2013,” he wrote, then signed it “Lukas Willems.” 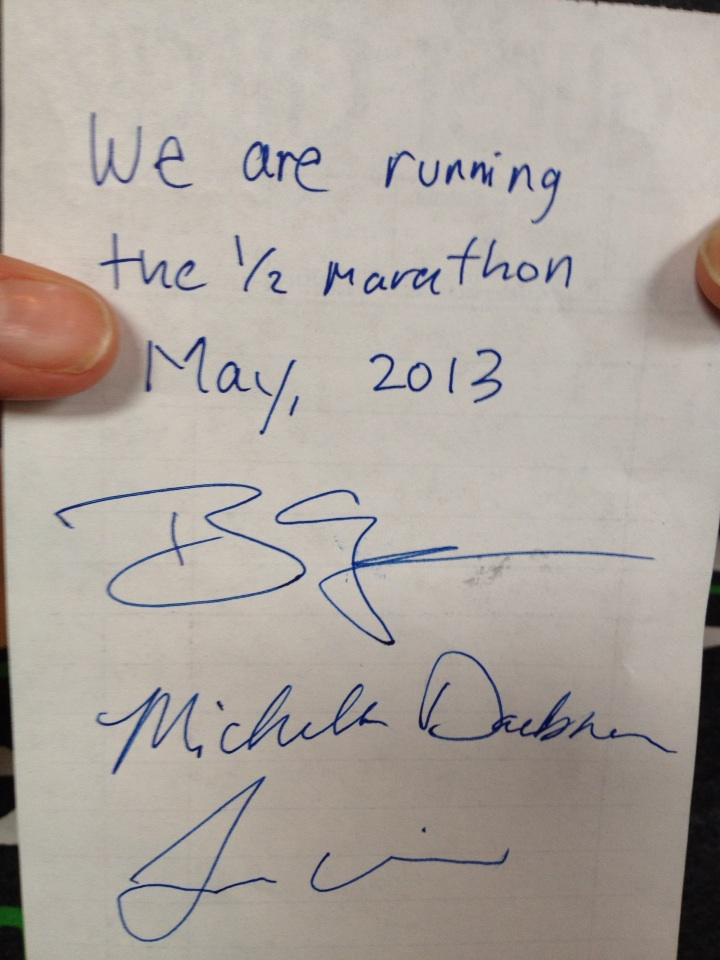 “I was with Jake the whole weekend of the race, I took the shuttle into the park and watched him finish, and it was sort of a thing where I thought that I’m putting all this time into it, why am I not just running this?” Willems said. “Like, what is my excuse if Jake and Eric Molin are running it and I’m not?”

Willems passed the check around the bar and asked his moderately imbibed friends to sign it to put their money where their mouth was. Many didn’t, but some did, including his cousin Michelle Daubner and Alexander’s bartender Bonnie Spielman, who gave into “some good healthy peer pressure.”

“Yeah I signed it, and the next morning I woke up like, ‘am I really gonna do this?’,” Spielman recalled. “I played basketball and volleyball, and running was always punishment. I’d never run in my life.”

But Willems was serious, and when registration opened for the 2013 race he signed up early, forcing his fellow signees to put up or shut up.

Willems was determined to run it, but that little slip of paper helped hold him to it.

“It definitely gives some accountability to it,” he said, and added in jest, “it’s a nice little motivator depending on how much you want your word to mean or not mean.”

Spielman said her signature helped her stick to it when she grew frustrated in her training.

“If I was just verbally committing, I probably wouldn’t have done it,” she said. “I probably would have denied ever saying it, so having the napkin I think did help hold me accountable. I mean, my name is on that paper, I’ve got to do this.” 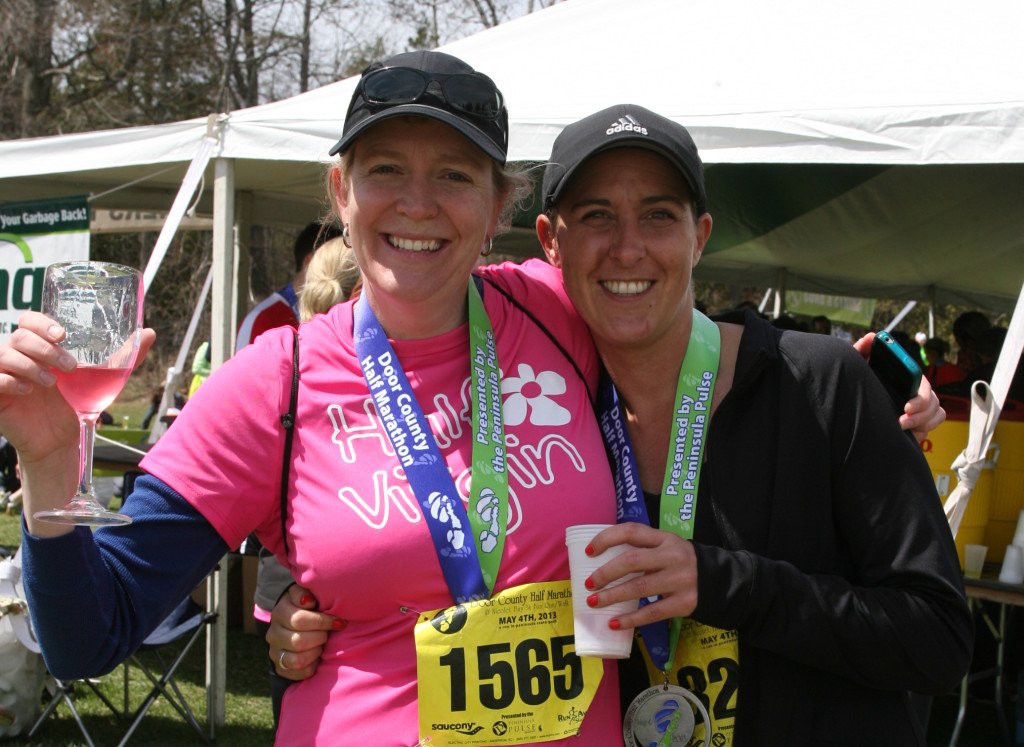 After finishing the race in 2013 (“she crushed it,” Nyberg said), Spielman made a personal commitment to herself to run every Door County race that year. She kept that one to herself and nearly achieved it, missing only two. The bartender who once considered running only a punishment now runs several 5ks and 10ks each year.

The group has since made a tradition of the morning-after brunch and commitment ceremony at Alexander’s, with the number of signatures growing each year. They’ve moved on to a more formal document as well, using a bar napkin rather than a guest check.

Nyberg will run his fifth Door County Half Marathon this year, while Willems, who now lives in Fort Lauderdale, Florida and has lost nearly 40 pounds since first making his running commitment, will return to run his fourth.

“It’s one of my favorite weekends of the whole year,” Willems said.

“Tradition becomes something you don’t want to disappoint,” Nyberg said. “This year it falls on Mother’s Day weekend and some guys have backed out, but I can always cite the napkin. That’s my contract. Maybe Sunday brunch will be a little more of a Mother’s Day brunch.”

And at brunch they’ll pull out a pen and a napkin, passing it around to become the first runners to commit to the 2017 half marathon with a signature as meaningful as any payment or registration form. 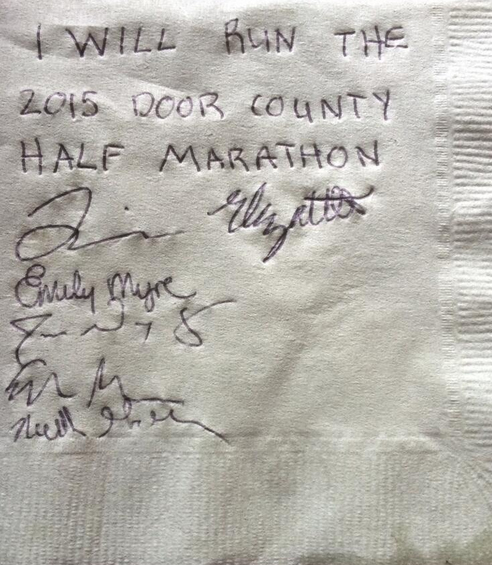 In 2013, the commitment switched to bar napkins. Photo contributed.