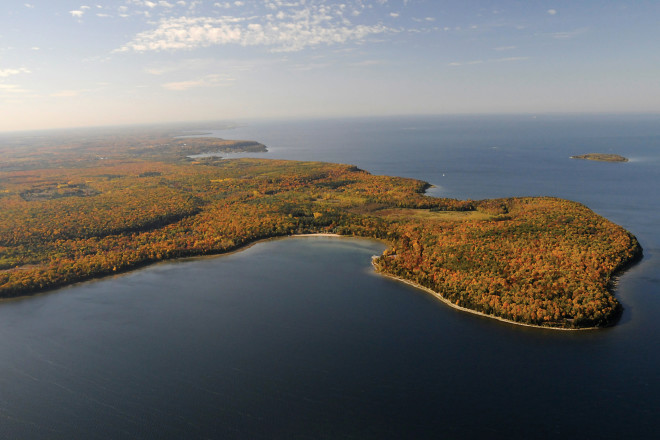 “I’m going for a run in the park,” I said to Brian Fitzgerald, a friend and the race director for this weekend’s Door County Half Marathon in Peninsula State Park. We occasionally hit the trails there together, usually starting at Lot 5.

It wasn’t until later that I noticed something interesting about that simple comment. “I’m going for a run in the park.” In some places, that might be considered so vague as to be irritating, but here, Brian knew exactly what I meant: Peninsula State Park. Though our peninsula has five incredible state parks and dozens of county parks and preserves, when someone says “The Park,” there is little question as to what they’re referring. That status got me thinking about the value of The Park again this week, but not in the flowery terms we usually use when thinking of green space and the natural environment. My mind turned to economics.

I thought of the things we spend public money on – multimillion dollar tax incentives for big businesses to keep jobs around a couple more years, infrastructure investments to attract such businesses, stadiums for billionaires who somehow convince us to foot their overhead costs (I wish I could have pulled that off in my restaurateur days!). These are all things we usually have to pay for all over again in five, 10, or 25 years (Minnesotans must be loving the idea of replacing the Metrodome with TWO new stadiums after just 25 years of use).

But here’s the beauty of The Park – we only had to buy it once. Sure, we pay for upkeep and management by the State Parks Department, but it doesn’t become obsolete. It doesn’t threaten to move if taxes aren’t to its liking. It doesn’t outsource its management or sunlight or shoreline.

Consider all that it brings us. A great golf course, Eagle Tower, sledding on Hill 17 in winter, Nicolet Beach, a home for the Door County Half Marathon, camping, biking and hiking trails, animal habitat (which benefits hunters), snowmobile trails, skiing, American Folklore Theatre, Eagle Bluff Lighthouse, a course for Gibraltar Cross Country, a Nature Center, and a place that attracts thousands of painters and photographers.

Plus, The Park serves as the affordable vacation point of entry for so many visitors who become lodging guests, seasonal homeowners, or residents. It generates bike rentals and ski sales, demand for camping supplies and groceries, as well as gas purchases.

What other public purchase could bring us so much? We build infrastructure and alter tax policy for the benefit of big business, all in the hope that they provide jobs. The hope. At a time when we talk about spurring jobs and getting Wisconsin back to work, isn’t it a little disingenuous that we so easily discount the value of public space, turning to park budgets as the easy place to cut? Consider the value of The Park – and I’m not referring to the intrinsic, difficult-to-quantify lifestyle value – but the clear economic impact.

How many millions of dollars have Door County businesses made on the back of The Park? How many rooms have been rented, dinners bought, and drinks put away by people who came to Door County to do something in Peninsula State Park, or who were lured here by its images? How much has it increased the value of real estate in Northern Door?

In spite of that value, a year and half after Tom Blackwood retired as Peninsula State Park superintendent, his old position is still filled only on an interim basis, state budget cuts continue to squeeze the park’s staffing and recruitment resources, and volunteers are becoming ever more important to its maintenance. This is the case for many parks around the state. When I talk to those involved, they tell me that this is how they’ve always filled openings, in part because of budgets, and in part because of struggles to find qualified candidates. But is this how it should be? We often ask government to operate like business, but would we expect any business to trim staff, cut its budget, and go without a CEO for 18 months when demand for its services (camping is at an all-time high) is growing rapidly and the business is bringing in more money than ever?

In what business does that make sense?

This Saturday I’ll be in The Park, helping Brian Fitzgerald with the Door County Half Marathon & Nicolet Bay 5K. We’ll start the races a few hundred feet from Nicolet Bay, where I’ve spent countless days playing volleyball, sitting in the sun, and swimming at the beach since my earliest memories. Later, 2,000 runners will finish the race, joining at least as many of their friends who will come to cheer them on, none of which would be possible without The Park and the people who work so hard to keep it a centerpiece of Door County culture. After the race, those thousands will swarm bars and restaurants, they’ll fill a lot of beds, and they will gas up on their way out of town Sunday or Monday.

I know The Park gets a lot of play, and a lot of praise. Still, after more than 100 years, it appears we underestimate its value.