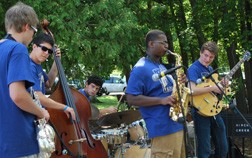 Imagine you are a young student with dreams of utilizing your musical talents to delight and enrich the lives of others through your performances, or perhaps you are interested in sharing your talent by teaching music professionally. Now imagine there is a place available to you that could help you achieve your goals by providing insight into what it is like to live the life of a professional musician. Birch Creek Music Performance Center is that place.

Birch Creek offers on-campus concerts and academic programs in Symphony, World Percussion & Steel Band, and Big Band Jazz from mid-June through late August. Founded in 1976, its mission is to provide intensive performance-based instruction to promising young musicians by immersing them in a professional, mentoring environment.

Over the course of the summer, approximately 200 students and 100 faculty from across the nation converge on the rural campus east of Egg Harbor, and join together to provide 30 concerts in the Dutton Concert Barn.

Every year, during each of the two jazz sessions at Birch Creek, five or six students in the upper echelon of all the talented young students are selected to become a part of an elite jazz combo, the Birch Creek Ambassadors. As Ambassadors they enjoy a rigorous schedule of performances in the local community.

The Ambassadors group was formed in 1999 to serve as Birch Creek’s goodwill ambassadors, acquainting residents and visitors with Birch Creek’s mission and programs, as well as bringing jazz to numerous venues throughout the county. At the same time, these promising young musicians are offered the opportunity to experience the life of a professional musician, thus fulfilling Birch Creek’s mission.

Performing side by side with Birch Creek’s nationally acclaimed faculty, the student musicians develop technical and improvisational skills that far surpass those developed through ordinary classroom instruction. It is sometimes hard to believe that the performers are only between 15 and 18 years of age.

Membership in The Ambassadors is attained by audition upon arrival at Birch Creek, and members represent the school’s most elite students. The Ambassadors maintain an intense rehearsal and performance schedule for the two weeks they are at Birch Creek, sometimes rehearsing for three hours in the morning followed by an afternoon and an evening performance. Their repertoire consists of jazz standards, and the group is generally comprised of a combination of instruments such as the saxophone, trumpet, trombone, piano, bass, drums and guitar. 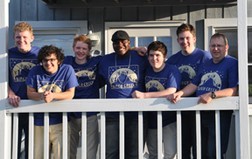 The 2012 Jazz II Ambassador group bonded over the course of a summer of performing together.

Venne remembers his Birch Creek instructors telling him he needed to take a risk to work in the music field. His instructors said, “If you want to try doing music professionally you may need to struggle. You need to get it out of your system and take a risk, take a leap of faith.” This advice stuck with him while he worked to achieve his goals. In college he performed in a local Wisconsin rock band that toured Germany, Switzerland, France, England, Ireland and the Netherlands.

Venne said, “It wasn’t until the last several years that a lot of paying dues has really paid off. You can’t get the kind of gig I have now by just doing music part time and hoping that something will come along, or by assuming you will land a gig right out of school. It just doesn’t work like that. The advice I received from my Birch Creek instructors isn’t what parents always want to hear, but it stuck with me.”

Venne credits Birch Creek with helping him gain confidence enough to take the risks necessary to work in the field he loves so much. He said, “Making the transition from teaching private lessons and playing in small gigs, to dealing with music that has a wider reach, is my greatest accomplishment and I am really happy working in this field.”

José Encarnacion and Marty Robinson are the Jazz Ambassador Directors this year. Encarnacion studied saxophone, flute and clarinet in Puerto Rico. He completed his bachelor’s degree at the Berklee College of Music and received his Master of Music degree from the Eastman School of Music. He has performed jazz, salsa and Latin music with the Bob Mintzer Big Band, the Dave Rivello Ensemble and Bobby Valentino, among others. He currently teaches Jazz Studies at Lawrence University and performs with the Lawrence University Jazz Faculty Quartet.

Marty Robinson is an associate professor of trumpet and jazz at the University of Wisconsin Oshkosh. In addition to teaching applied trumpet students, Robinson directs the jazz ensembles and teaches a jazz history class. Robinson holds a music degree in trumpet performance from Lawrence University, composition from the Eastman School of Music, and jazz studies from Florida State University. Prior to coming to University of Wisconsin – Oshkosh in 2004, Dr. Robinson served for ten years as an associate professor of trumpet and jazz studies at Florida A&M University in Tallahassee, where he was recognized as “Teacher of the Year” in 2001.

For more information about Birch Creek’s concerts and academic programs, call 920.868.3763 or visit birchcreek.org. Better yet, join us for a concert at 3821 County Highway E (three miles east of Egg Harbor), or stop by for a visit and we will give you a tour of our campus.