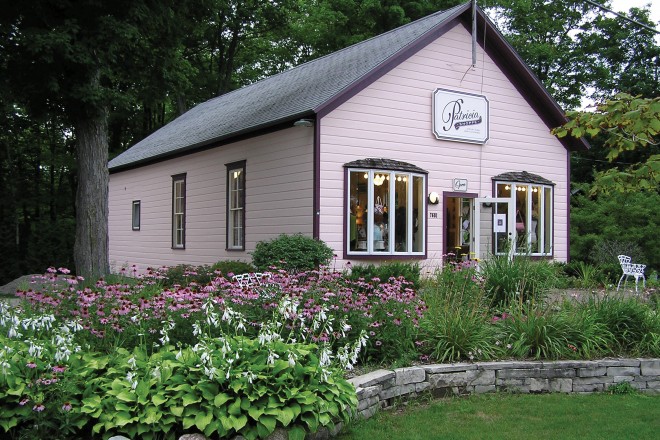 Originally built in the 1880s, the former Egg Harbor Town Hall was the site of town elections and public gatherings (including the popular Saturday Afternoon Movie showing) for over 100 years until finally closing its doors as a public meeting place and government building in 1990. A simple clapboard building with a slightly raised stage at one end, large windows symmetrically marching along both sides and an outhouse in the back, the town hall no longer could meet the needs of the modern town and its government. The building was sold and all government functions re-located to the current space on County Road I. The building then became home to the Towne Dresser, an antique shop. Former residents of Egg Harbor might be surprised to pass by the building today. Its traditional white exterior has been replaced with a cheerful pastel peach. It was painted as part of the extensive renovation to the building in 2005 by its new occupant, Patricia Shoppe.

Patricia Shoppe was opened in the spring of 2001 by local business-woman Erin Anchutz Bosman. But the story of Patricia Shoppe is actually much older. The original Patricia Shoppe was located in Chicago and first opened its doors for business in 1937. Patricia McGrath Lind was the proprietress and also the great-grandmother of Erin. The shop was an exclusive women’s boutique selling hats, gloves, jewelry, and clothing custom-designed by Patricia. The clientele ranged from working women to high-society socialites who were attracted to Patricia’s unique designs and dedicated customer service. Patricia moved the shop to another Chicago location in the mid-1950s and phased out the custom clothing line, bringing in ready-to-wear clothing lines while continuing to feature high-quality accessories. The shop remained open until 1967.

The elegance and high-style surrounding Patricia was a draw for her great-granddaughter. Visiting Patricia’s apartment in Chicago was “always an exciting and glamorous experience, from the front doorman to Patricia herself, garbed in haute couture and furs,” recalls Erin. “She would share stories of the shop and its patrons. Patricia was an inspiration for me to open my own shop and continuing her legacy with a new Patricia Shoppe seemed like the perfect tribute.” The current Patricia Shoppe echoes the original, featuring high-quality accessories and jewelry for women.

With tradition and history built into the inspiration for Patricia Shoppe as a business, the idea of renovating a historical landmark for a new home never seemed too far from the realm of possibility. Erin and her husband, Kevin, were both raised in Door County and have ancestral ties to the area. They knew that the project would be extensive, but were committed to preserving a local piece of history. Though the previous owners had installed a well, septic system and indoor plumbing, there were structural problems that needed to be repaired immediately. The building had been constructed with a solid hand-hewn central beam running under the floor, 50 feet in length and more than a foot thick. The beam supported the foundation as well as the flooring, but time and dry rot had taken a toll and it needed to be replaced for the building to be safe. This also meant that the flooring would have to be lifted and after seeing the condition of the original pine flooring, the decision to replace it was made.

It was discovered during this time that the building was slightly irregular and would always remain about two inches off, a testament to the many years the structure has withstood. More of the history of the building was discovered during this process. “When the town hall was originally built, Belgian Draft horses were commonly used to assist with the heavy hauling and lifting during construction. While we were replacing the beam and flooring, we discovered some wood scraps in the crawl space that had horseshoe imprints on them, leading us to believe that horses were used to haul the beam into place,” says Erin. “Though most of the original beam was rotten, some parts were okay and we are using them outside in the gardens.” New walls and plastering were also necessary after many years of the building settling on the stone foundation.

Keeping as many of the original elements of the building as possible was important to Erin and Kevin. Though the pine floorboards had experienced cupping over the years and were no longer usable as flooring, Kevin was able to salvage some of the boards, plane them down and they are now used as trim around all of the windows in the shop. The flagpole that stands sentry over the front door has weathered many seasons and though most likely not the original timber, is certainly a reflection of the first one. The raised stage was walled off to create office and storage space. The linoleum flooring in this space re-creates the pattern that was displayed in the main hall for many years.

Erin decided that though the historical renovation of the structure was important, she wanted the interior of the shop to reflect the era of the original Patricia Shoppe, rather than the early 1900s. The bathroom was the first area to complete this feeling, with a black and white checkered tile floor reminiscent of the time and replica fixtures. The flooring for the main shop area is rustic cherry wood that was hand oiled, rather than varnished, using a historically correct technique for an authentic appearance. The bead board wainscoting was replaced with silk paneling, evoking the elegance of Patricia and her original shop. Extensive research led to choosing lighting fixtures that would have looked at home in the Chicago store and carefully selected antique display fixtures complete the stylish atmosphere. The new Patricia Shoppe opened its doors for business in the spring of 2005.

Behind the former town hall, there is also a second structure on the property. Once home to the Egg Harbor Fire Department, this former fire station is also in need of restoration. And, as Patricia Shoppe continues to grow, Erin and Kevin hope to renovate this building as well. “It would be wonderful to be able to preserve another piece of Egg Harbor’s history,” says Erin. “We were very fortunate to have the help of so many family members and friends on the town hall. We are looking forward to continuing our restoration efforts in the future.”