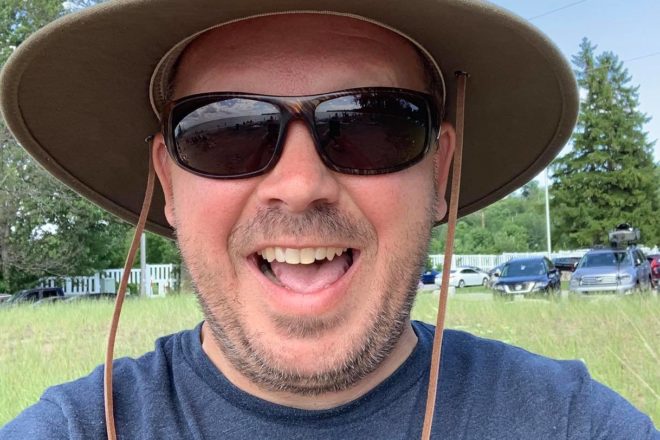 The Peninsula Pulse employs 24 full- and part-time staff members who live in or have strong ties to Door County. This crew brings you the news in print, on video, online and in podcasts every week. In each edition of the Pulse, we’ll introduce you to one of the people behind the page. This week, meet Brett Kosmider, co-founder and creative director of Peninsula Filmworks.

When Brett isn’t wandering off into the wild to take nature pictures with his drone, he’s working as the creative director of Peninsula Filmworks. He rang in this new year by roasting a giant turkey and mashing five pounds of potatoes. He then lived off this bounty for a month, which he’s super excited about. Read more about Brett in an extended Q&A below.

Celeste Benzschawel (CB): Where did you grow up?

Brett Kosmider (BK): I hail from Cedarburg, just north of Milwaukee, in the great state of Wisconsin. After stints in Oshkosh, Eagle River, Phoenix and Minneapolis, I’m happy to be back on the lakeshore once again.

CB: Where did you go to school, and what did you study?

BK: I would say the School of Hard Knocks, but I did attend and graduated from the University of Wisconsin-Oshkosh, where I studied film.

CB: What brought you to the Pulse, and what’s your role here?

BK: I am a co-founder and the creative director of Peninsula Filmworks. For years, David Eliot, Myles Danhaussen Jr. and I would ruminate about the possibility of starting a film company in Door County. About five years ago, that vision became a reality. Peninsula Filmworks has been slowly producing more and more content for doorcountypulse.com, and we’re looking forward to making a big splash in 2020.

BK: The best part about living and working in Door County, for me, is the proximity to the water and wild places. Without a lot of effort, you can step off the concrete and find yourself in some pretty amazing places up here.

CB: What’s the last thing you were really excited about?

BK: On New Year’s Day, I roasted a giant turkey and mashed five pounds of potatoes and ate off of it for a month.