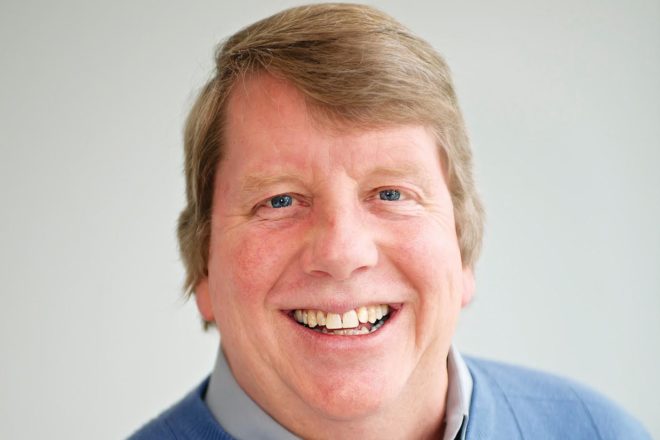 The Peninsula Pulse employs 24 full- and part-time staff members who live in or have strong ties to Door County. This crew brings you the news in print, on video, online and in podcasts every week. In each edition of the Pulse, we’ll introduce you to one of the people behind the page. This week, meet sales manager and writer Stephen Grutzmacher.

Even though his high school and college might not have wanted him around, the Pulse sure does. Steve is a sales manager and writer, and when he’s not here in the office, he’s probably looking for comic books to add to his collection … or admiring his prized lava lamp. Read more about Steve in an extended Q&A below.

Celeste Benzschawel (CB): Where did you grow up?

Steve Grutzmacher (SG): My father was an English professor and later worked in administrative positions in academia, so we moved a lot. My early years included stops in central and south-central Illinois, southeast Iowa and Tampa. We moved to Beloit, Wisconsin, in 1970, where I went to junior high, high school and, ultimately, college. My family first visited Door County in the fall of 1970, though my parents had honeymooned on the peninsula in the early 1950s.

(CB): Where did you go to school, and what did you study?

(SG): I dropped out of high school after my junior year to enroll in Beloit College (for a variety of reasons – primarily financial incentives – but Beloit Memorial High School wasn’t sad to see me go).

I thought I would go into one of the sciences, but I discovered I really liked history. By my third term, I was a declared history major. Sometime in my junior year, it was pointed out that it wouldn’t take a great deal for me to have a double major in English composition, so I ended up with a double major. If I had wanted to stick around for a ninth term, I could have had a third major in art history. Somehow I just couldn’t see a lot of return on that investment. Besides, a lot like my high school, Beloit College couldn’t wait for me to leave.

(CB): What brought you to the Pulse, and what is your role here?

(SG): Former co-owner Madeline Harrison would frequently stop in my bookstore in attempts to persuade me to come write for the Peninsula Pulse. At the time, I was writing a weekly column in the Door Reminder and helping with layout of the same publication’s insert, the Vacation Guide. After the Door Reminder was bought by Gannett, my enthusiasm for working there began to rapidly wane.

So when Madeline stopped in with Dave Eliot in late 2002, I agreed to join the Pulse team. When I came on board, I offered to help Madeline sell ads because I had the advantage of knowing far more people and businesses than she did at that time. And ultimately, all of this evolved into being a sales manager and writer for our various publications and ventures.

(SG): There are two things I really enjoy. The first is that, somewhat to my own surprise, I have really grown to enjoy ad sales: meeting business owners, learning about their business and helping them with ways to promote and grow.

The part I like best, however, is the people I work with. I have said for years that the Pulse office is the one place I can always be certain to find intelligent conversation, sharp and nimble wit, and patient listeners. And this has been true for as long as I have worked for the Pulse. I consider myself very lucky to be a part of this team.

(CB): What’s the last thing you were really excited about?

(SG): Not everyone knows I collect comic books. Not long ago, when I had the opportunity to hold a copy of Amazing Fantasy #15 – the first appearance of Spider-Man – I was practically skipping for the rest of the day.