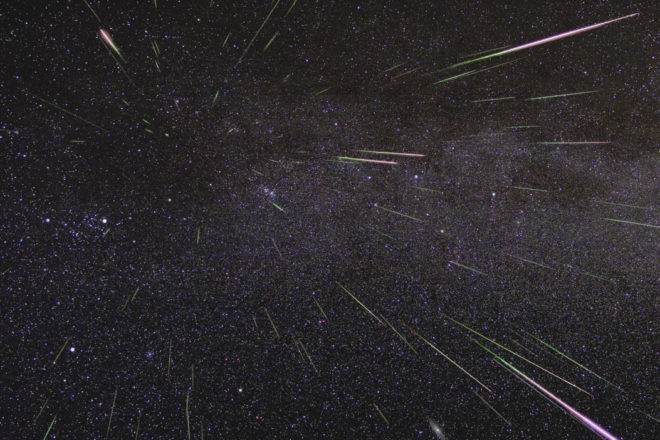 An outburst of Perseid meteors lights up the sky in August 2009 in this time-lapse image. Stargazers expect a similar outburst in this week’s Perseid meteor shower, which will be visible overnight on Aug. 11-13. Photo by NASA/Jet Propulsion Laboratory.

Every August, the Northern Hemisphere is treated to one of nature’s most popular celestial events, the Perseid Meteor Shower. This year, if conditions are favorable, the Perseid should be the best show of the year. Peak nights for viewing this year happen to coincide with new moon, so there will be virtually no interference from the moon lighting up the sky. These nights are August 11-12 and August 12-13, with August 12-13 being slated as the night for the better show.

The Perseid meteor shower occurs every year as the earth passes through the dust and debris trail of the Comet Swift-Tuttle. This year, Earth passes through the comet trail July 17-August 24, passing through the densest area of the trail the night of the shower peak (Aug. 11-13). The comet was independently discovered by Lewis Swift and Horace Parnell Tuttle in 1862. It has a well determined orbit around the sun of 133 years, with the next pass of its orbit nearest the Earth taking place in 2126.

The best place to view the meteor shower is away from city lights and areas of light pollution; not an easy task if you live in an urban environment. Find a dark spot well after sundown, get comfortable in a place you can lay back to get a wide view of the sky and be patient. The best part of the shower may be after midnight, with an estimated 60-70 meteors visible per hour.

Here are a few things to keep in mind. Be aware of your surroundings and terrain when going into dark areas. If using a light or headlamp, try to use one with a red lens to protect night vision. This is not only for your benefit, but for others that may be there too. It only takes a small amount of light to ruin night vision and it will take your eyes about 30 minutes to adjust to the dark. If you do not have a light with a red lens, you can put red duct tape over your flashlight. A red balloon or red cellophane will also work. If nothing else, keep your light pointed down so it does not shine in others’ eyes. You will want to bring a comfortable chair or a blanket and bug spray.

If you are reading this and lucky enough to be in Door County, think about watching the shower at Newport State Park, Wisconsin’s only designated International Dark Sky Park. After years of going through a strict application process, Newport received this distinct honor from International Dark Sky Association (IDA) in 2017. IDA is the oldest recognized organization in the world dedicated to protecting and preserving our heritage of dark skies.

As in years past, Universe in the Park will be at Newport the night of August 12th. UW-Madison astronomy graduate students give a presentation at 8:30 pm, then will be setting up their telescope for viewing and to answer questions. Viewing will go on as long as conditions are good.

If you can’t make it that night, Door Peninsula Astronomical Society (DPAS) happens to be doing a, “Five Nights under Dark Skies” event the nights of Aug. 10-14. Members of DPAS as well as the park naturalist will be on hand with telescopes and binoculars for dark sky viewing. They will be available after 8 pm each night.

Let’s all hope for clear skies, as August holds much promise for sky viewing opportunities. Make time to take in our beautiful, dark skies. Find a good spot, relax, look up and prepare to be amazed!

For more information on these or other programs at the park, go to     dnr.wi.gov/topic/parks/name/newport and search under the “Get Outdoors!” tab for nature programs and events. You can also find information in the Peninsula Pulse Events and Happenings section.

Beth Bartoli is the naturalist at Newport State Park and a founding member of the newly formed Northern Door Astronomy Club. This group of amateur astronomers of all levels meets at various places, views the wonders of the heavens and helps each other experience the wonders of the universe. For inquiries or more information, emails can be sent to Beth at [email protected]