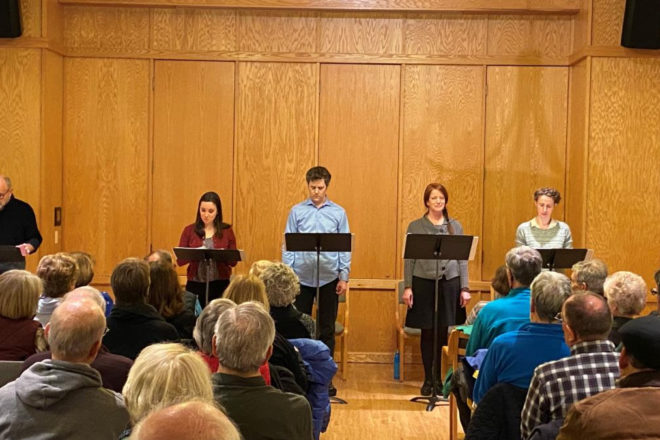 Peninsula Players Theatre presented a reading of Joseph Zettelmaier’s Haunted: The Great Lakes Ghost Project on March 2 to a capacity crowd at Björklunden. This collection of ghostly tales from around the Great Lakes region captivated the audience.

Several years ago, Zettelmaier, a Michigan-based playwright, began a journey across the Great Lakes states to collect stories of true, otherworldly encounters by Midwesterners from Indiana to Wisconsin and wove these tales of the supernatural into a theatrical piece that asks, “Do you believe in ghosts?”

Participating in the play reading were Cassandra Bissell, Neil Brookshire, Hayley Burgess and Amy Ensign under the direction of Greg Vinkler.

The 2020 The Play’s the Thing play-reading series will conclude with Eternity by Wisconsin native Michael Cochran on April 6, 7 pm, at Björklunden in Baileys Harbor.