All her adult life Sturgeon Bay quilter Carola McMullen has been immersed in politics in one form or another, beginning with her degree in sociology and continuing both with her work in university administration and with her service as a school board member. Her first husband was a political science professor, and her second, a management professor. One of her sons is a professor of philosophy while the other is a university administrator.

“Whom will Obama pick for his running mate?” she asked, sitting by a quilt in progress in her home studio. At the time of our interview, his announcement was due that day or the next. 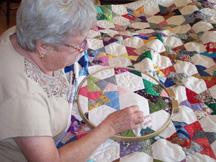 The politics of quilting, however, does not necessarily relate to elected offices.

“It’s a connection with society,” McMullen said, “a wonderful way to make friends. I founded a quilting guild made up of my students, a wonderful support group.

“Women who create or work together become closer to each other,” she continued. “They share not only their creativity but also their concerns about things going on in their lives. And they support each other. It’s a positive, sympathetic source of friendship.”

Perhaps politics on a local, state or national level ultimately consists of support groups for people with “concerns about things going on in their lives.”

“When I left the school board,” McMullen said, (she served first for Wilmette Elementary and later New Trier High School in Illinois) “I decided that I wanted to find the artist within me. I liked sewing; I decided to become a quilter. I had made a few quilts earlier and enjoyed the process as well as the product.”

Every Monday morning for five years she took a class at a senior center in Winnetka, Illinois, perfecting quilting techniques.

Now she passes those skills to others. For 15 years she has conducted classes at The Clearing in Ellison Bay. In addition, she now teaches quilting at the John C. Campbell Folk School near Murphy, North Carolina. She also offers private daylong classes, and occasionally a week-long class, in the studio of her home overlooking the bay. Because of her reputation as a quilter, students seek her out by word of mouth.

“The process of quilting is dear to my heart,” McMullen said. “Many quilts I give away because I want others to enjoy them.” Her work covers the beds of her family members and has been raffled for charity as well.

Waiting for repairs in her studio is a well-worn, album quilt in shades of blue, each block a different star pattern. Made for one of her sons, this piece is her most beautiful work, she has been told. Once it has been refurbished, the quilt will return to its home with her son. 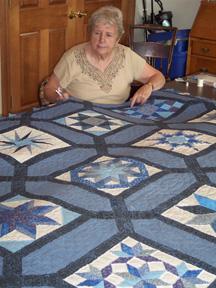 Carola McMullen with one of her quilts that she will refurbish and return to her son. Photo by Gary Jones.

“I am a traditional quilter,” she said. “I prefer putting traditional patterns together using unusual fabrics and color combinations. My favorite part is hand quilting.”

The process of creating a quilt involves making a “sandwich” of a decoratively pieced top, a fiber bat inner layer for warmth, and a plain fabric backing. Sometimes quilts are tied – periodic single stitches through all three layers, knotted and clipped to a short length. Quilts also can be sewn together by machine, but the most decorative and highly valued are those sewn together by hand – tiny stitches that outline the pieced patterns and form intricate designs over the open spaces. These latter quilts are reminiscent of “quilting bee” projects depicted by Currier and Ives with women seated about a quilting frame, a communal effort as each quilter contributes her stitching, thus shortening a lone woman’s lengthy task.

McMullen prefers to use a 14-inch quilting hoop rather than a frame for her hand quilting. And because of her productivity (she estimates that she had made between 300 and 400 quilts) she generally uses a combination of machine and hand quilting, the process she is employing in her present work in progress, an intricately-pieced quilt with multi-colored stars alternating with hand-stitched, circular designs.

Over the years, her quilting has evolved from the early pieces that were made with simple designs and tied to quilts with increasingly intricate, challenging patterns that were hand quilted. But she has remained a traditionalist as she keeps alive the folk craft of quilting, hence her work as an instructor at the John C. Campbell Folk School.

Working within this tradition, she views herself as both a craftsman and an artist.

“A craft describes something where you need a skill,” she said. “I try to teach my students good techniques so they can learn the craft.

“An artist needs talent to chose color and designs that are pleasing to the eye,” she continued. Once she has taught her students techniques for the craft, they “can make it into an art.”

Subsequently, “I like to have my students choose their own colors and designs as much as possible,” she said, “to bring out the artist in them.”

At the close of each class at The Clearing she asks her students what sort of projects they might like the next time sessions are offered. “That’s how I select the subject matter and pattern for each class. They feel a sense of ownership, then,” she said.

As an artist, McMullen has accepted some commission work.

“But I don’t want anyone to tell me what to do!” she said. “It must be my design. However, I will listen to their color choices.”

She has also appeared in a number of exhibits; occasionally she gives talks on the history of quilting.

McMullen’s history in Door County began in 1989 when she and her husband purchased a house in Ephraim; in 1992 she became a permanent resident. Because she found herself frequently driving to Sturgeon Bay for supplies, she bought a house on Bay Shore Drive near town. Eventually she built her present home with ample room for her two golden retrievers, her quilting classes, her own projects and visits from her sons.

Shortly after our interview, Barack Obama’s announcement of Joe Biden as his running mate met with her approval. But even though she is politically liberal, she is uncomfortable with a feminist label.

“I don’t like the term,” she said. “I just believe in equality among people.”

Experienced quilters and those who want to find the artist within themselves (as McMullen did when she began quilting), may watch for announcements of both winter and summer classes at The Clearing.