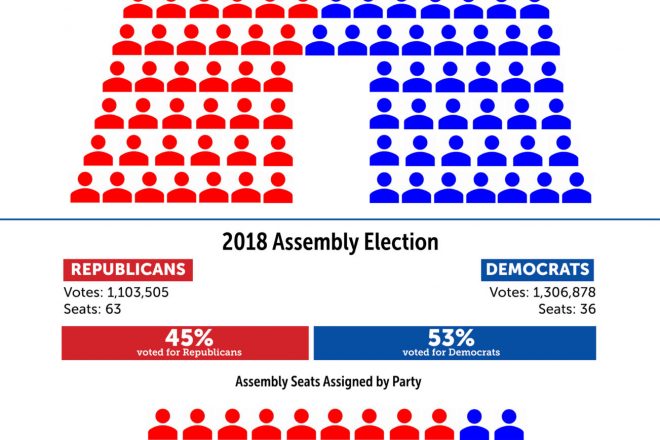 Kitchens on his latest redistricting vote

Two days before an independent commission released sample district maps for the state of Wisconsin, the Wisconsin legislature passed a resolution seeking to preserve the existing districts.

Senate Republicans passed Senate Joint Resolution 63, with the Assembly’s concurrence, on Sept. 28. The resolution outlines guiding principles to make each district of equal population, compact and legally contiguous. Also included is a directive to “retain as much as possible the core of existing districts.”

Gov. Tony Evers, a Democrat, has said it is unlikely he would approve any maps that maintained current districts. And two days later, the People’s Maps Commission released its nine preliminary maps for public input. The governor had created the nine-member, nonpartisan redistricting commission by executive order in January 2020 to draw fair, impartial maps.

All of Wisconsin’s eight U.S. representatives and 132 state legislators (99 in the Assembly, 33 in the Senate) are elected from political divisions called districts. District maps are redrawn every 10 years following completion of the U.S. census.

The Door County Board of Supervisors has drawn its new preliminary map, defining the 21 districts on the peninsula, but the redistricting process in the state is by no means completed.

Wisconsin state lawmakers draw the new maps, but the governor has the power to veto them. If he does, the maps go to the courts.

The Wisconsin Assembly and Senate voted along party lines for Resolution 63, including Rep. Joel Kitchens (R-Sturgeon Bay), yet Kitchens and four other GOP representatives had signed on to bills earlier this year that sought to reform the redistricting process by giving the task to a nonpartisan commission rather than politicians.

Asked to explain his votes, Kitchens said last week that he signed on to the bill that would have reformed redistricting because people have lost faith in the mapmaking process.

“People in both parties have lost faith,” Kitchens said. “I want people to have faith that they’re being represented fairly, and I think that’s eroded. The reason I’ve supported that is to try and restore that faith.”

The reason he supported the resolution to keep the existing districts is because he doesn’t believe the current maps are all that unfair.

“I truly do not believe the maps are as bad as the opponents make them out to be,” Kitchens said.

He said he believes the guiding principles in the resolution – equal representation, compactness and contiguity – would achieve fair maps. Kitchens said too much emphasis is placed instead on whether Democrats or Republicans are getting enough seats in proportion to the vote outcomes.

During the 2008 Assembly election under the previous decade’s maps, 42% and 56% of Wisconsinites voted for Republicans and Democrats, respectively, with 46 seats given to Republicans and 52 seats to Democrats.

Following the 2010 census, when Republicans controlled the legislature and governor’s office and drew the new maps, the outcome of the 2018 Assembly election was 45% and 53% for Republicans and Democrats, respectively, with 63 seats going to Republicans and 36 seats to Democrats.

Kitchens said if mapmaking authority were removed from the legislature, it could restore voters’ faith in the process, “if you could do it right.” The problem is getting it right when some believe there’s no such thing as an impartial board of people.

“That’s what scares a lot of people,” he said. “You put them in place, and they have their biases, too.”

Other states have appointed commissions or used a hybrid system with the state legislature and a commission working together to create the maps.

“We should send these maps out to Australia and have them draw them,” Kitchens said.