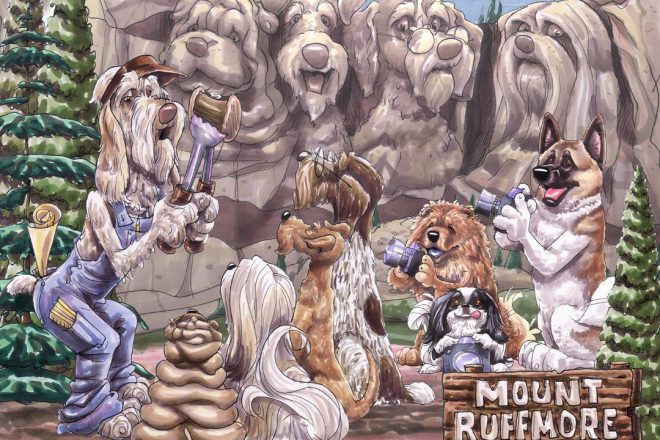 It would be an insult to most people to say their work had gone to the dogs, but for Mike McCartney, it’s not only true, but a succinct description of his truly remarkable career.

He and his wife, DeDe, met in high school art classes in Buffalo Grove, Illinois; were married in 1979; and moved to Door County, where she had spent time with her grandfather, Ernie Jackson, and was also related to the Witalisons, Bundas and Felhofers.

Mike went to work at Bay Shipbuilding, but on the weekends, he often loaded an easel into his old fishing boat and headed down to Potawatomi State Park to draw caricatures of people for $4 each.

“There used to be a little bar there called The Moorings that hung them on the wall,” he said.

Over a beer at that bar or another, McCartney and a friend lamented the fact that cute bar napkins seemed to be a lost art, and when he was laid off temporarily at the shipyard, a contact with Wisconsin Tissue Mills led to a time filler for a while. “There’s still a case of them around somewhere – 25 designs,” McCartney said with a laugh.

Later, in the testing and planning departments at Peterson Builders, he was recruited to paint colorful shark jaws on the sides of rescue ships, like those on British Spitfire planes during WWII.

“I loved the camaraderie at the shipyards,” he said, “and still enjoy seeing guys I knew there around town.”

McCartney worked in the shipyards most of the time from 1982 until 1991, although his art sidelines were expanding. In 1985, he and his sister, Lori, attended a cartoonists’ seminar in  California.

“The first person I spotted was Charles Schulz in a circle with a dozen or so other great cartoonists, like the guys who drew Garfield, Frank and Ernest, and Miss Peach,” he said. “And I thought, ‘I want to be in that circle someday.’ I spent most of the day with Schulz. He looked through my entire portfolio and even had lunch and dinner with me. He actually did a sketch for my sister, but I just got an autograph.”

Their mother, Nancy McCartney, raised and showed Great Danes, and for her birthday and Mother’s Day, her son created cards featuring funny dogs.

“Her friends with dogs liked them, too, and I started making notecards to sell,” McCartney said. “The cards were so successful that in 1994, we created plastic travel mugs featuring 75 different dog caricatures. The minimum the manufacturer would make of each design was 500. We were totally unprepared.

“When the giant semi pulled up with more than 1,200 cases of mugs – 38,500 of them – we had to scramble to rent four storage units. To find a particular mug, we had to shift boxes around, like a Rubik’s Cube. But we finally sold most of them, and the rest were donated to dog-rescue missions throughout the U.S.”

Nancy McCartney showed her Great Danes all over the country and had been urging her son to join her to do caricatures.

“I assumed she meant drawing dog owners,” he said, “but she meant dogs, and she was right. It was a leap of faith, but in 1991, DeDe and I and the kids – Butch, 10, and Stevi Lee, 5 – packed up every Friday and headed to Houston or Denver or somewhere else, and I sketched dogs for two days before driving home like crazy with the kids asleep in the back so Butch could get to school at Sevastopol on Monday.”

For 10 years, while driving to two big dog shows a month, they continued to develop dog-themed items: T shirts, sweatshirts, glass cutting boards, welcome mats, mouse pads, tote bags, signs, pillowcases and canvas wall art. A special attraction for dog-show customers was being able to look through the huge books of 8,000 dog caricatures and have DeDe and the kids print their choice – from the huge inventory the McCartneys hauled to every show – on a shirt right on the spot.

After a decade, they cut the travel to five major shows a year: in New York, Pennsylvania, Texas, Kentucky and Illinois. By then, McCartney was producing so many items that it took a day and a half to set up the booth and his drawing area, and they filled three pages of the R.C. Steele Company’s catalog of pet products, mailed every month to 2 million customers. Fax orders poured in.

“I was riding a big wave,” McCartney said. “We were going like gangbusters with a bunch of teenagers and two women helping with production in the daytime and another woman on the second shift. Then Steele sold their business to PetSmart, which was only interested in acquiring their customer base.

“For a time, PetSmart indicated they might also want to carry all my dog items, but I would have needed to add barcodes to everything. My gut feeling told me not to get excited, and as it turned out, that connection never happened. It was a blessing in disguise, because if it had, I’d have become a full-time manufacturer with no time to draw. So, instead of riding a wave, I was back to riding a ripple.”

However, by 2002, that ripple had made its way to St. Louis, where Purina, the world’s largest pet-food manufacturer, hired McCartney to draw a dog calendar. He’s just finished calendar #21, the 2022 edition, featuring caricatures of 130 breeds in 250 poses.

“Drawing is easy,” he said. “I just let the pencil dance. The hard part is finding a new theme for each page. As always, DeDe is my inspiration and my best critic.”

McCartney starts each calendar in March and intends to spend no more than two weeks drawing each month’s art within the calendar, but the work often runs way overtime. Two of the 2022 months, for example, took eight weeks each.

McCartney is extremely proud of the American Kennel Club’s invitation to participate in Dog NY, a fundraiser for search-and-rescue dogs like those that died from working at the Twin Towers site during the days following 9/11. Purina purchased his patriotic design “Paws for Peace” – on one of the 300 dog statues displayed around New York City in 2002 – at auction, and it’s on permanent display in its corporate headquarters in St. Louis.

Might McCartney now be included in that circle that surrounded Charles Schulz? Lots of people would say so. And might he retire someday?

“I guess I might,” he said, “but I’ll never stop letting my pencil dance!”