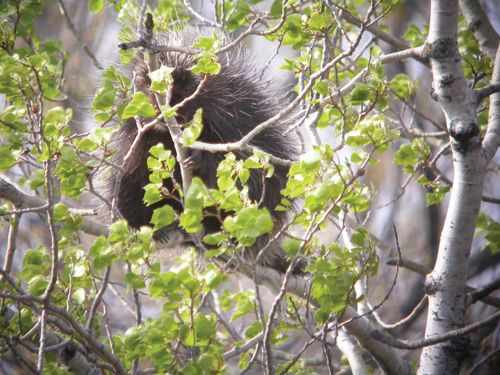 The porcupine, a mammal native to Wisconsin, is the second largest rodent in North America. It doesn’t hibernate and, with luck, may be seen in wooded areas throughout the year.

In all likelihood it is dog owners who have become most familiar with this clumsy, slow-moving creature, frequently referred to as a genuine nuisance. What the owners of overly-inquisitive dogs see most are not the problem animals themselves, however, but rather their pets having returned home with noses and mouths full of porcupine quills. 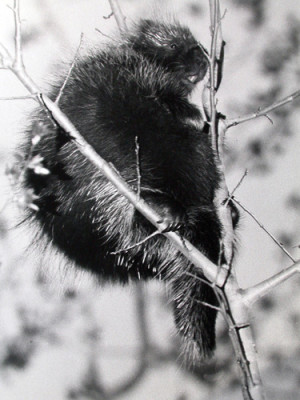 A memorable sighting of a porcupine occurred several years ago in late December while we were doing our annual Christmas Bird Count. The tracks in the snow of the slow-ambling porky led to an arborvitae tree. Well out of reach by the dangerous humans, the porcupine paused long enough for all to view it carefully through binoculars.

Retracing its tracks led us to its nearby den and toilet beneath a leaning, partly hollowed-out arborvitae. There, much to our amazement, were several thousand droppings, a dry bed upon which the animal could rest or sleep. With its back and tail facing outward, we assumed it would have little to fear from its predators, such as the fisher, a member of the weasel family.

The oval droppings, three-quarters of an inch to slightly more than one inch in length, appeared like finely-ground sawdust molded into very uniform shapes. Literature, based on porcupines studied in captivity, indicates that an adult “quilled creature” can produce up to around 200 droppings a day.

Bark stripped from the limbs and trunks of several nearby Red Maples indicated at least part of its current diet. Many large hemlock trees in the area, whose upper branches and crowns were virtually eaten to smithereens, surely were supplying a good portion of its diet as well. Even in winter, one animal frequently remains in a tree until all twigs, leaves, or needles it can reach have been eaten. 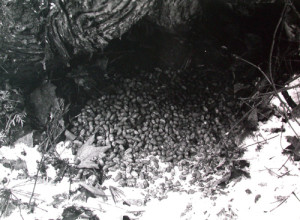 Yellow pond lily and other shoreline plant roots, as well as the bark, twigs, and leaves of trees are prized as food by these hardy eaters. Hemlock trees rank as favorites followed by aspen, basswood, Balsam Fir, spruce, arborvitae, pine, maple, birch, beech and willow. Teeth patterns clearly visible on the trunks of the maples indicated their fondness of the nutritious inner bark, the phloem, and the extreme sharpness of their teeth. They are self-sharpening and continue to grow throughout the porcupine’s lifetime.

An important factor in the success story of these ponderous dawdling creatures is their nearly total immunity to predators. It is said that fishers, mountain lions, wolves, coyotes and Great-horned Owls are among the few that can successfully kill and consume parts of a porcupine – and survive. Automobiles and forest fires are by far the worst enemies of these living pincushions.

Interesting questions are asked regarding the 30,000 or more one-inch to four-inch barbed quills an adult has, such as, “How do they mate or give birth to young?” The age-old answer is “very, very carefully!”

A subtle, off-again, on-again courtship of a couple of months leads to the actual mating. When finally they stand on their hind legs, come together and touch noses, the signal by the female to proceed has been given. 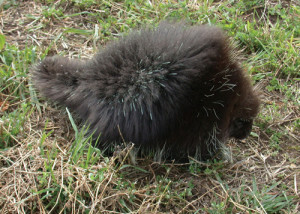 Read Sally Carrigher’s superb book, Wild Heritage, a classic about animal behavior. It was in this book that I learned that the female porcupine is receptive to being bred for only a matter of several hours in an entire year. The female pulls her quills tightly in toward her body and draws her tail flat against her back. The male is fortunate in that the undersides of her tail and belly are soft and lack quills.

Quills of the young porcupines, referred to as porcupettes, are soft at birth but harden within a few hours. The well-developed baby, as much as 20 ounces and 10 inches long, has the distinction of being one of the largest babies in proportion to its mother’s size born to any animal. By two days they are already capable of climbing trees, eating leaves and defending themselves.

The porcupine is painstakingly slow in its movements (other than swinging its tail in defense) and can’t throw quills as many people believe it can. It is fast at biting off branches and eating leaves and evergreen needles. It is also docile-looking but deadly with its quill-weapons. For the most part, it is not a troublemaker, but brings about hours of anxiety to some dog owners and, of course, pain to the dogs.

The remarkable porcupine remains in a class by itself, a rodent to be respected and admired.