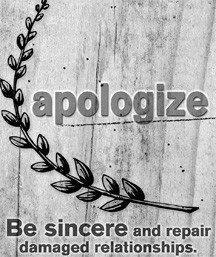 Almost like magic, a genuine apology offered and accepted has the power to repair harm and to restore damaged relationships, be they on a small, intimate scale between two people, or on a grand scale, between groups of people, even nations. Waves of relief wash over; resentment, fear, and anger dissipate.

Apology is not just a social nicety; it is one of the most profound interactions of civilized people. It is an important ritual that is crucial even to our cultural survival. Without the healing powers of apology, our human, fallible selves would succumb to the impulse for vengeance, grudges, feuds and other hostile behaviors. We would make the development of healthy individuals and healthy societies all but impossible.

Sound too dramatic? Just look around; I rest my case.

If we were to dissect the many ways that we offend and are offended by others, we would find that the majority of these offenses (such as bullying, intimidation, deception, embarrassment) target our sense of self, our standing, within the community. We are extremely sensitive to our relative status, power and respect.

So, when we perceive an intentional or unintentional insult against our dignity and honor, we experience that insult as humiliation. It is this experience of humiliation, of being belittled or dismissed, that many people find so intolerable.

The challenge of apology is to reverse the devastating effects of humiliation by restoring the dignity the person once enjoyed. Apologizing is the act of giving back what you took away. Can you think of anything other than a genuine and sincere apology that can mitigate the effects of humiliation? I cannot.

Beyond restoring dignity and honor to the offended person, apology must also address other fundamental needs in order to be fully effective. Victims need reassurance that they are not at fault and that their hurt and anger are justified. They need to hear that they are safe from further insult. And yes, they need to see the offender suffer in some way, figuratively or literally.

An effective apology helps to level the playing field, equalizing the relative power and status of both parties to what it was before the offense.

Given the powerful and highly sensitive nature of apology, it does not come as a surprise that anything short of a genuine and sincere apology, which covers all requirements, will be recognized in an instant – and will be rejected as shallow and disingenuous. A meaningful apology needs to communicate three things: responsibility, regret and remedy. The offender needs to clearly state the offense and claim complete responsibility for it, with no blaming and no excuses. Choice of words counts.

Those pesky conjunctions really change the meaning. Consider the difference between “I’m sorry I hurt you” and “I’m sorry if I hurt you;” and “I’m sorry” versus “I’m sorry, but…” Saying “Mistakes were made” dilutes the locus of responsibility even more than “I deeply regret.” Remorse and shame acknowledge the suffering of the offended person, and also serve as evidence of the offender’s suffering – to be humbled before the offended person. Remedy can mean a promise never to repeat the offense, and it can mean reparations or restitution, legal or otherwise.

While an apology cannot undo harmful past actions, it can undo the harmful effects of those actions. There are plenty of obstacles to offering and accepting an apology. So, it doesn’t always work, but a genuine and sincere apology is always worth the effort.

Have you witnessed a Random Act of Civility? Let us know about it at [email protected].