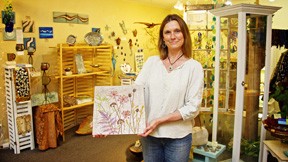 Place, according to Aristotle, is the fourth type of attribute possible for a substance, defined as said substance’s “position in relation to the surrounding environment.” This is not one of his most poetic moments, but Aristotle would also characteristically assert that the word ‘place,’ even with its definition, may be “said in many ways.” It is in a few such ways that artist Pam Banker finds her place here, at her Earth Art Studio.

On the lower level of Sister Bay’s Country Walk Shops, cloistered away from the bustle of the Piggly Wiggly parking lot, framed by flora and copper garden ornaments, the little shop offered haven that rainy day to many a soggy shopper. Safe inside, Pam acquainted me with her artwork, including wildflower-pressed tiles and Lake Michigan-glass jewelry, as well as some pieces by the 50 odd other artists who she features: Terry Acker’s hand-built, leaf-engraved ceramics; iridescent butterfly wing earrings; colorful Georgian wind chimes composed of recycled bottle bits; and whimsical mermaid wall décor by Martha Murphy.

After the tour, Pam tells me about her journey to where she is today: “For a really long time, I did not know what I wanted to do; I was absolutely in a quandary.” She dropped out of college three times because, “without a focus I can’t work, I need to understand what I’m doing and why I’m doing it.” Eventually Pam earned a degree in social work, and ironically, it was as a stress relief for her job as a career counselor in the Madison area that she first began experimenting with clay. The resulting series of dolphin sculptures, mounted on Door County stones, would soon reveal her true career. 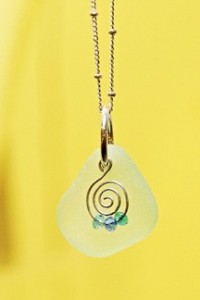 A delicate necklace feature sea glass is on display at Earth Art Studio in Sister Bay. Photo by Len Villano.

When Pam brought her creations into work one day to show her friends, three employees unexpectedly asked to buy them. “Somehow that just, like, flipped a switch!” Pam laughs. Though her attention didn’t stay long on sculpting, it settled on art and entrepreneurial business for good. Pam started traveling to art fairs and hosting open houses at a studio she’d built in her garage. She didn’t have great success at first, but she knew she was doing what she was meant for. She had finally discovered her vocational niche, that place in the world which she struggled to find throughout all those years of schooling. “Now it makes sense,” she says: despite childhood memories of stealing crayons and standing before easels with pure joy, “I didn’t know there was this artistic part of me, it came out later.”

Then, one autumn down the road, Pam was attending a class at our Peninsula School of Art when she “just for fun” looked at the real estate guide and, noticing a house in her budget, asked “just for fun” if she could see the property. In the end, Pam bought her house here even before selling her old one. “It was a giant leap of faith,” she admits, “but it worked out…and the crazy thing is that, when I made the choice to move here, things just started clicking as far as selling my work.” She closes, “It was like I needed to come here to become an artist.” I can believe it: it has always astounded me how powerful a pull one particular place can have on a person, and Pam had the standard story of a lifelong love for Door County, based off countless summer vacations and several summer jobs.

Thus, Pam found her geographic place in the world too. Now she enjoys being able to give people their own “little piece of Door County” through her art. 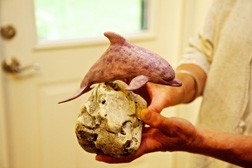 At last, in the Earth Art Studio, which she has run for the past nine years, Pam cares for her own personal place. As conscientious about the environment she creates in her store as the natural one outside it, Pam employs her creativity in displaying her artwork in addition to the art itself. Also, because she has learned mostly on her own – from a mixture of books, YouTube, and good old experimentation – her different crafts have grown out of each other organically, which lends her shop a certain innate cohesion. Clay works came first, but the clay dried out her hands, providing reason for Leaf, Pam’s line of natural cosmetics; then she needed something to do with those hands while keeping shop all day, so she took up jewelry making; that evolved from semi-precious gemstones to include both beach and fused glass – it’s also how she began hammering and colorizing copper, a metal she finally brought back as frames for those original clay tiles.

The other artists in her shop, Pam says, are very specifically chosen. By carefully combining her pieces with theirs, she tunes all the varied colors, textures, and patterns into a rich visual concord. Stir in some ethnic background music and Pam’s own welcoming charm, and the end effect speaks for itself. “This is my ninth season, and people come back year after year,” Pam says gratefully. “I just love that, when I see someone walk through the door and I recognize their face…I feel like, you know, that’s kind of what I’m doing for them – giving them this experience, a place that they feel good when they come in.”

Earth Art Studio is truly Pam’s place, in every sense of the word – vocationally, geographically, and personally. When I asked her where she would like to go from here, she mentioned the attractive possibilities of having more store space, teaching children, and peddling beads. Yet ultimately, she replied, “You know, Erin, I just want to keep doing what I’m doing.” In her profession, Pam is privileged to care for other people as well as the planet we live on. And so, whether it’s selling directly to a customer something that she made or doing commission jobs, when patrons put faith in her to carry through a design that they came up with together, Pam continues to find her Earth Art work “totally satisfying.”