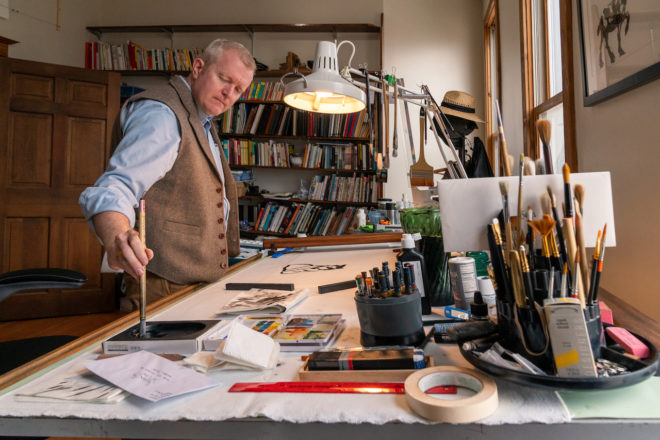 Taylor pursues a variety of art styles in his Sturgeon Bay studio. Photo by Brett Kosmider.

Seth Taylor’s studio in Sturgeon Bay appears to belong to many artists. Lifelike portraits are strewn about a table alongside caricatures of politicians; several loose-lined ink drawings of animals — deer, horses, sturgeon — take up an entire wall; a watercolor is beginning to take shape on an easel near the window; and brightly colored children’s illustrations — dancing bears, smiling mushrooms and animals’ toes — alternate on a computer screen.

“As an artist, you’re told to have a single response to, ‘What kind of art do you do?’” Taylor said. “I’ve never been able to limit my curiosity to a single direction — to my detriment in some respects — but I think it makes things so much more interesting.”

With passport in hand, Taylor has pursued this curiosity to the far reaches of the globe for the past 30-odd years, ever since enrolling as a foreign-exchange student in Malaysia straight out of high school. It was an experience he found fascinating, liberating and addicting.

“In the U.S., you have certain cultural expectations — things you’re expected to do,” he said. “When I went to Malaysia, nobody knew what Americans were supposed to do, but they also didn’t expect me to be Malaysian, so there’s this space where you’re allowed to be a culture unto yourself. You are who you are.”

With this newfound sense of self, Taylor went about getting an art education not by careful planning, but by chance, and through his willingness and eagerness to learn whatever he could from whomever he could.

“A lot of artists, when they talk about where they learned art, it’s a list of different institutions, different internships,” Taylor said, “but for me it’s kind of a list of the countries that I’ve been to and what art was happening [that] I ran into there.”

First there was the introduction to traditional Chinese ink painting at an artists’ commune in Beijing. Taylor was skeptical at first.

“I always felt — and part of it was looking at it with uneducated eyes — that Chinese painting always looked the same,” he said. “Like Renaissance art, a kid would look at that and say, ‘It’s just old,’ but in Beijing, I started to see artists doing new things with it.”

Taylor added more layers to his education in Vietnam, learning about values and tones from a photocopy artist working with charcoal dust on the streets of Ho Chi Minh City, where he also learned technical painting skills from a group of artists whose occupations entailed re-creating famous European paintings that were shipped to China and Europe.

“One guy was the Van Gogh guy, and he would paint Van Gogh sunflowers 50 times a week. There’d be a guy doing Rembrandt, and one doing Monet’s waterlilies,” Taylor recalled. “As long as I didn’t get in the way, they were willing to let me hang out.”

He studied art history when he hitched rides on dump trucks to the farthest corners of Qinghai province, a remote region of China that’s technically closed to foreigners, “but there were so few people — mostly Tibetan yak herders and monks — no one enforced it,” he said.

The monks welcomed him into their monasteries, showing him ancient Buddhist art, known as Thangka scrolls (Google them — they’re incredible), which had to be hidden from the Chinese government.

Taylor’s brushwork improved during a calligraphy class in Taiwan, where seating was ranked by beginner to advanced. “I never got out of the beginner seat,” he said with a laugh.

He delved deeper into Thangka painting in India, honed his portrait skills in Japan, and studied life drawing, painting and watercolor in South Korea.

Throughout these 30-some years of travel, Taylor primarily earned his living by teaching English. In Taiwan, he taught basic English to elementary students and corporate English to the country managers of Microsoft, Christian Dior and Montblanc. He taught Tibetan refugees in India, where he met his wife, Hong Byung Yun. And eventually he and his wife started their own language school — the Da Vinci Language Academy — in her home country of South Korea.

“We focused our school just on elementary,” Taylor said. “Our focus was getting our kids to exist in English, learn through English. We created a program that fixed all the problems I saw with traditional English-language education and education in general. That was a passion for 13 years.”

During those 13 years — the longest Taylor has lived anywhere since graduating from high school — he joined an artists’ studio, Jankura Artspace. He found a mentor whom he credits for “bringing everything together and cementing it into a more recognizable style for me.”

This style was the culmination of years of unconventional education and combining elements of Asian and Western approaches to artwork.

“The basic idea of a lot of Asian art is that you need to practice doing what the masters did for 10 to 15 years. Then, over time, you develop your own style — if you’re lucky,” Taylor said. “The Western approach, especially in modern art, is [that] you have to start creating your own stuff and have your own voice right away. There are positives and negatives on either side.”

Taylor’s style is often described as “Asian art in the West.” “But it really isn’t,” he said. “If you take my artwork to Asia, people buy it because it looks different. A Japanese person looking at my work instantly knows it’s not from a Japanese artist.”

Throughout his travels, Taylor sold his art when people wanted to buy it, but he didn’t consider art a career until later in life.

“I just thought of art as part of what you do. Just like I wouldn’t think of cleaning the house or getting dressed as a career,” he said. “I was immersed in doing art and having art around me, and it didn’t click that that was what I wanted to do until a lot later, until things started to coalesce, and people started saying, ‘How much do you want for that?’”

Taylor sold art in Taiwan and Japan; his work was featured in art shows in South Korea; and several Asian publications hired him for portrait work.

Since relocating to Sturgeon Bay in the summer of 2020 — a move inspired by his ancestors, who immigrated to the county during the 1870s — the Miller Art Museum in Sturgeon Bay featured his ink painting “The Wild Balance” in its Wildlife Biennial show. It’s a piece Taylor calls a “synthesis of a lot of work I have been doing for a number of years. It’s a kind of breakthrough for me.”

Between working as a bridgetender, remodeling a 120-year-old building on 3rd Avenue, raising a toddler and awaiting the publication of his first children’s book — another artistic avenue on which he recently took a detour — Taylor continues to hone his many crafts and seek out unexpected educational opportunities and teachers, such as his daughter, Mina.

“She calls my attention to things I no longer see: these granular details she’s excited and curious about,” he said. “As an artist, you’re always looking for that.”

Taylor’s certainly not done learning yet, and who knows where the Door County arts scene will take him?

“The wonderful thing about art,” he said, “is you never get to the end of it.”

Learn more about Taylor and his array of work at SethTaylorStudio.com. His work will be featured in a show at SOMI Gallery, March–April 2022.