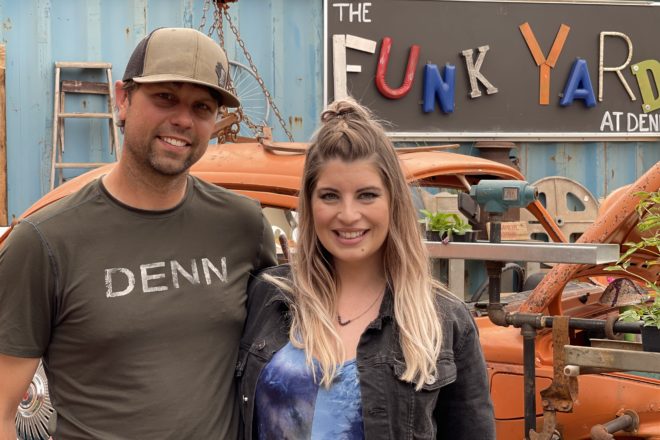 DJ and Milissa Kloida, owners of DENN, inside the Funk Yard. Photo by D.A. Fitzgerald.

Even in a place where “unique” is everywhere, DENN definitely stands out.

This became apparent almost immediately while following hand-painted signs to DENN’s parking lot off County DK in the Town of Gardner. The car’s wheels crunched over the rocky dirt drive as the low-slung buildings came into view beneath an expansive sky. It felt like being transported to the desert Southwest. It felt like a place where vintage and rusty things had been rescued with care from past-prime use and made fresh again. Which is all to say that there is something magical about the shabby-chic, utterly creative, reclaimed world of DENN, created from scratch by the husband-and-wife team of DJ and Milissa Kloida.

The Kloidas built their store out of four shipping containers on part of a 30-acre wedge of land that came with a farmhouse and barn between the old and new highways 42. Inside those shipping containers, they sell DJ’s furniture and light-fixture creations, Milissa’s designed merchandise, and many lines created by local makers and vendors.

The containers are angled to create a courtyard space called the Funk Yard. This space is a kind of “picking barn,” where they display an ever-growing collection of antiques, oddities and vintage items to inspire imaginations and maybe that next DIY project.

DJ has made three spaces out of a fifth shipping container, complete with air conditioning and electricity. They’re renting two of those spaces on summer weekends to local artists and merchandisers for pop-up shops.

“It’s something that we would have loved to have found back in the day,” Milissa said.

The third space in the fifth container will become a coffee and wine bar, and they also have food trucks scheduled for the summer.

The Kloidas opened their new store for Labor Day weekend 2020, but they had been in business for seven years prior to that as Dennis John Industrial (Dennis John is DJ’s given name). He had made a name for himself through his line of handcrafted home décor and furniture, as well as industrial-modern lamps made from pipes. They hauled their wares to events and markets across the Midwest every weekend.

“It got to be a lot of travel and a lot of work, so our goal was someday to open our own store,” Milissa said. “When we found this big, beautiful property with the farmhouse and the highway exposure, we thought, ‘This is the one.’”

The couple, both 37, moved from Appleton and were familiar with Door County from visits during their youth. Milissa grew up in Marinette, DJ in Menominee, and Milissa’s family would boat across Green Bay to spend vacations in Fish Creek and Ephraim.

“I knew my heart would take me here someday,” she said.

The Kloidas had been counseled to open their shop in northern Door County, but they bucked that wisdom and feel they’re satisfying an unmet need in Southern Door. It has benefited them that everyone coming and going along the highway can see DENN painted on the side of one of the shipping containers.

“We are pretty much everybody’s first or last stop on their trip,” Milissa said.

As they put the finishing touches on the fifth shipping container, they’re talking about turning corn cribs into gazebos and a vintage truck into a community table. They’re also planning a pavilion made from another shipping container that would house party rentals and art and DIY classes.

“It feels like we never skipped a beat from when we started this journey,” DJ said.

Eventually, they’ll turn the farmhouse into a retreat space. They’re also thinking of rechristening their place with a new name that best describes their partnership: DENNMIL.

“We have the perfect partner in each other,” Milissa said. “We really balance each other’s strengths and weaknesses and creativity. Our two minds come together and just make it happen.”