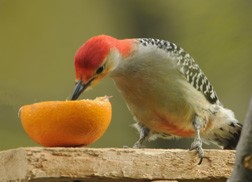 This male in breeding plumage has a considerable amount of red on his lower belly.

One of our top favorite wild songbirds coming daily to the feeders for the past 30 years has been the Red-bellied Woodpecker. It’s a species I didn’t get to know as a boy in Kewaunee during the 1940s and ‘50s because, up to that time, there had been very few seen that far north of its usual southern environments. Actually the first one I saw in Kewaunee County was in 1962.

These striking “ladder-backed” woodpeckers were reported from Brown County, Wis. as early as 1877 probably because of there being more oak trees there, and these woodpeckers, along with the Red-headed Woodpeckers, are fond of acorns.

Door County also had a fairly early “red-belly” because of the outstanding birdwatcher and bird-bander Harold Wilson from Ephraim. If there was one of those birds in the village or vicinity, chances are Harold knew about it and had reported it as well. The earliest and farthest northern report of this species in the state was in Douglas County in 1957. Marinette County didn’t report one until 1978.

I had been drafted into the U.S. Army field artillery in 1953, assigned to an atomic cannon battalion, and saw my first “red-belly” at Fort Sill, Okla. in the spring of 1954. I was a member of the fire-direction control (FDC) group, responsible for using slide rules and other highly technical top-secret devices to compute the cannon settings and firing directions for the monstrous 280 mm (bore size) atomic cannon. Unfortunately small computers still hadn’t been perfected yet.

Day after day, night after night, we trained, studied and practiced in the field firing 600-pound high-explosive projectiles, working toward absolute perfection and the “big day” when there would be no room for mistakes. Many hours of field exercises soon became routine, and our poor ears rang more and more.

How we came to despise the roaring blasts from that highly perfected weapon whose atomic projectiles, designed to kill many people and do great damage to enemy forces, could hit a target up to around 20 miles away. You may sense why this marked the beginning of my deep interest in ornithology, really as a genuine escape from what was becoming ear-damaging drudgery. 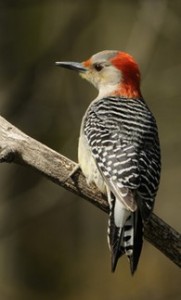 Fortunately, the one and only atomic round ever fired from one of these cannons was on May 25, 1953 at the Nevada Test Site (Frenchman Flat), shortly before I was assigned to my unit at Fort Sill. That demonstration, highly advertised world-wide, so impressed the North Koreans that the event proved to be largely responsible for that dreadful war to come to an end.

We had been taking turns at our assignments around the clock at Fort Sill during a very critical field exercise, and before getting some “sack time” (on the ground in the middle of the day) I grabbed a pair of binoculars, most likely in an effort to regain my sanity, and set out to look for the origin of a strange sound I had been hearing all that early morning.

A hundred or so yards from our FDC tent was a freshly made hole about three inches in diameter near the top of a 20-foot stub of a large tree. Chips were flying, and whatever was down inside was making a plaintive “pddrrtt” call over and over.

Finally out popped a head, creamy-tan on the sides, flashy vermillion on the top, reminding me of the color of mercurochrome. Eventually the bird crawled out of the hole and presented itself to me – handsome, fine black-and-white horizontal barring on its back and wings, soft tan on its underparts, this being delicately washed with a pinkish cast on its very bottom. It was a female Red-bellied Woodpecker, the first I had ever seen – a “lifer!”

It was nine more years before I saw my next one while conducting the 1963 Christmas Bird Count in my home Kewaunee County. That was on Jan. 1, and others in the group included my dad (Adolph Lukes), Elmer DeCramer, John Kraupa and Roger Tess. The flashy male was seen near Casco Junction. That exciting observation stands out so vividly in my memory that I could take you to the exact place of our sighting 49 years ago.

Charlotte and I moved into our new home in the woods in the middle of the county, containing Red Oak trees, in late November 1982. We saw our first red-belly at our feeders in the late afternoon of Aug. 10, 1983. All we could see were hints of red on the top of the bird’s head, so we predicted at the time that it was a juvenile male that had been born earlier that summer. 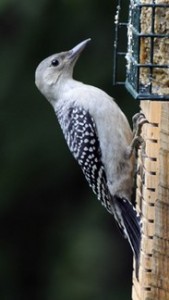 Immature Red-bellied Woodpeckers, recently out of the nest, lack red on top of their heads.

Happily, “Red” matured into a magnificent male specimen and adorned our feeders several times daily. He was somewhat aggressive and authoritative, but polite at the same time, an excellent member of our small wild bird community. He was easily capable of bossing all of the other woodpeckers around except the Pileated.

What always impresses us, as “Red” flies away with strong wing beats up into the tall Basswood tree in our front yard, is his distinctive white rump patch (also seen on the female), somewhat like that of a Common Flicker.

I think back to my army field artillery days and, unknown to my superiors, were field guides about nature I always carried with me in my backpack. You better believe I was thoroughly ribbed by my buddies for packing along my bird guide with me every time we took to the field. But what they never did find out was that I also had one on trees and another on wildflowers.

That was only a start, and I’m so indebted to all those other people who were responsible for teaching me through the years to take interest in every single form of natural history I encountered regardless of where I was. Wouldn’t you, too, be willing to prefer a Red-bellied Woodpecker over an atomic cannon? I would! Any day!