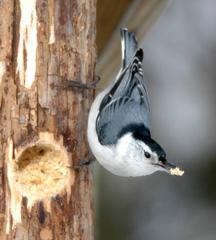 The White-breasted Nuthatch eating at our Marvel Meal feeder. Photo by Roy Lukes.

Hopefully you number yourself among the many people who feed wild birds and enjoy two of the most admired and appreciated species, the Red-breasted and White-breasted Nuthatches. Several of our friends refer to them as the “upside-down birds,” simply due to their habit of nimbly walking down the trunk of a tree or clinging to the underside of a branch in search of food.

An easily observed feature of both nuthatches is their unusually large feet for such small birds, which in turn provide them with such great nimbleness. They do not hold their gathered food with their feet but rather wedge it into, for example, a shallow crevice in the bark of a tree. Now they literally hack away at the acorn or sunflower seed to get at the meat of the matter. The European species, after which ours was named, is the Eurasian Nuthack, very similar in appearance to our Red-breasted Nuthatch. Americans have a long history of corrupting words to their liking.

Even though we in northeastern Wisconsin consider both species as permanent residents, it is very common for both of these nuthatches living in the extreme northern part of their ranges to move southward (as documented by banding) in search of a more reliable source of winter food. Black-capped Chickadees are known to do the same thing. In other words, you may be among those who feed birds and enjoy both nuthatches only at your winter feeders. Come spring they head back north.

White-breasteds are permanent residents of our woods, frequent our front-yard feeders year-around, and bring their fledglings to the marvel meal feeder in our front yard. It is only during some winters that we are so fortunate to have one or two Red-breasteds living in our woods and who frequent the feeders. They relish the marvel meal and also hulled black oil sunflower seeds as do the White-breasteds.

The female Red-breasted Nuthatch with a gray crown.

It is quite easy to sex both of these species. The male Red-breasted has a very rich rusty-colored breast and a pitch black crown while the female’s breast is a very light rust color and her cap is a washed-out black or dark gray. Naturally both sexes sport the flashy black eye line and white eyebrow.

Both White-breasteds have white faces and chests. The male’s back is a richer blue-gray and his cap is jet black. The female’s back color is a duller blue-gray and her cap is a very dark gray, which may require a close binocular-view to distinguish. This is what provides these “upside down” creatures with such incredible nimbleness while searching the crevices and crannies of trunks and limbs for insects or their eggs. The nuthatches do not have stiff tail feathers as do the woodpeckers who use them as a third support when perched on a vertical surface.

One feature of the nuthatches is their unusual trusting tameness, more so with the Red than with the White. Several winters ago, when we were still feeding small chunks of beef suet in wire baskets to whatever birds would eat it, I had an endearing experience with a male Red-breasted Nuthatch. I had just finished filling the chicken-wire cage with beef suet when suddenly the nuthatch landed on the narrow wooden platform at the base of the feeder. Being within about three feet of the 4 ½ inch little scamp I began speaking softly to the bird. To my astonishment the nuthatch faced me, perfectly still, and appeared quite interested in my presence.

Slowly I reached toward the bird with my hand, and if the bird’s few thin high notes meant something in English they might have said, “Hi buddy, what are you up to?” I came within inches of “Red,” and to my astonishment he never flinched a feather while he eyed me suspiciously. Next I very gently began stroking the ends of his toes, and next I carefully stoked his belly feathers. This went on for about five seconds when suddenly the tiny creature had enough of my boldness and away he flew. 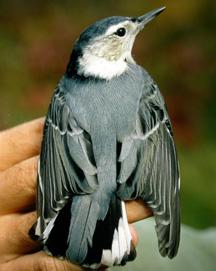 The White-breasted Nuthatch being held by Roy.

One thing many birdwatchers enjoy about these gymnastic creatures is their day-after-day, week-after-week never-ending calls. Other birds become quite silent once nesting season has ended. Not so the nuthatches. Red’s soft oboe-like call, from my observations, is made without any movement of the mandibles whatsoever, produced entirely in its throat. The call is not at all like the stronger, more twangy, nasal “ank-ank-ank” call of the White-breasted. Red’s is considerably more mellow and subdued. I call him “Piping Red.”

Red-breasteds prefer upland mixed, upland conifer and lowland conifer forests. One of their primary foods is the small seeds of Black Spruce trees. White-breasteds favor upland hardwood, upland mixed and lowland hardwood forests as well as urban environments. Never during the 27 years I led hikes at the Ridges Sanctuary did I see a White-breasted Nuthatch along the trails. Red-breasteds were commonly seen and heard there day after day. I was so fortunate to see one of the Red-breasted adults fly into its nesting cavity in a very rotten and punky pine tree. True to what the literature states, the cavity entrance was liberally smeared with sticky fir or pine pitch. Continuing to observe Red’s coming and going, the bird appeared to fly directly into the entrance without ever so much as touching any of the pitch. Experts haven’t come up with the reason for the pitch-encircled entrance, possibly to deter ants, Western Fox Snakes or other natural predators.

Enjoy both of these beautiful little birds at your feeders. Better still, locate a large stand of pines, spruces or other conifers this winter. There you will have an excellent chance of seeing and hearing one of these most irrepressible, dapper, talkative, charming and trusting birds of the forest, the Red-breasted Nuthatch.