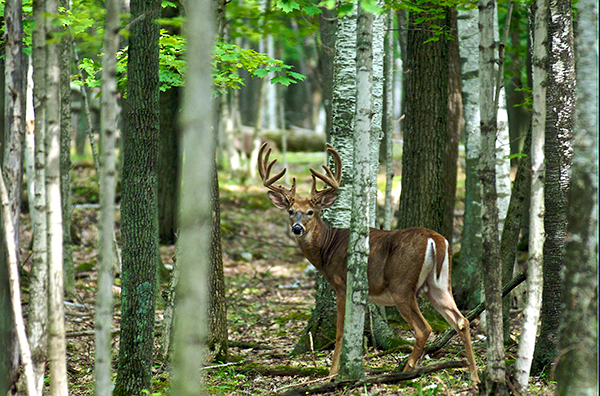 Pat Sexton was still pumped with adrenaline after shooting his first deer Nov. 19.

“It’s only the second time I’ve ever shot a rifle. It might be beginner’s luck,” Sexton said after bringing in a buck he bagged on a friend’s property to be processed at Haberli’s Deer Processing on Haberli Road in the Town of Sevastopol.

Sexton, a 63-year-old Chicagoan with a home in Egg Harbor, said he decided to take up hunting upon retirement, however, “My wife and kids don’t want anything to do with it,” so he was happy to donate his first kill to the Hunt for the Hungry program, where the meat is processed and given to an area food pantry. 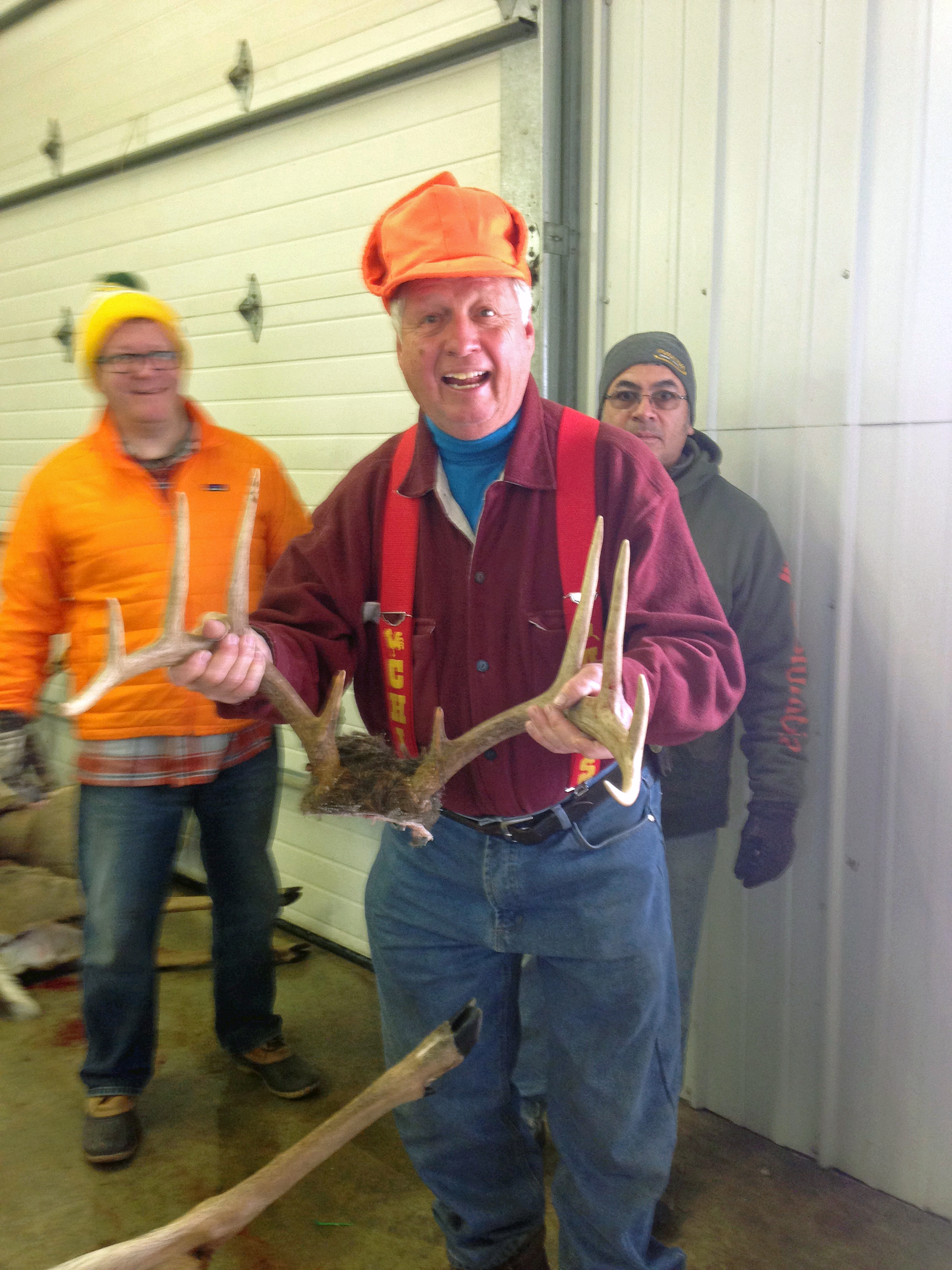 Tom Laundrie of Green Bay displays the antlers to the buck he bagged Sunday morning and brought for processing to Steve Haberli for processing. At about 170 pounds, it was the largest buck of the day.

“At least it’s going to a good cause,” Sexton said.

A steady stream of hunters arrived at Haberli’s the first weekend of the nine-day gun hunting season. On Sunday of opening weekend, owner Steve Haberli said he was seeing more bucks come in than does.

Haberli and his crew worked quietly and efficiently in processing the deer brought in. Steve Haberli would greet each hunter and fill out the required paperwork, which includes whether the hunter is donating or keeping the meat. He also asks whether they prefer more roasts or steaks during the processing. If they bring in a buck, he asks if they want the antlers. Most do. While cutting out the antlers, Haberli also harvests the brains, which the tanner uses to tan the hides – the process of converting decomposable rawhide into durable, water-resistant leather. Native Americans learned that the oil (lecithin) in a deer brain was perfect for tanning the hides.

This is the 17th year that he and his crew have been processing deer, after the closure of Kerscher’s in Valmy, where he said he and some of the crew previously worked.

Dick Baudhuin, chair of Door County’s Deer Advisory Council, was not at all surprised to hear that more bucks were being shot during the opening weekend.

“Unfortunately, a lot of hunters don’t care to shoot antlerless deer, for a multitude of reasons,” he said. “Some are of the opinion there aren’t enough deer or you can increase the deer numbers. Unfortunately, the habitat is such that it can’t support as many deer as we have on an ongoing basis. Now with different agricultural practices, with more fields tilled in the fall so the residue of crops are not available, wooded areas are getting hit harder.”

Baudhuin said the proof of that is indicated by what deer are eating. For the last six or seven years deer have been eating white spruce, which used to be far down their eating list, he said.

“It’s very unusual for them to eat that, and it’s because the other preferred foods are gone,” Baudhuin said.

That is why Baudhuin is an advocate for the return of the Earn-a-Buck program, which required hunters to bag and register an antlerless deer before using the antlered buck tags. The legislature repealed the law in 2011, despite it being recognized as one of the most effective deer management tools.

“Earn-a-Buck was a good tool, but it’s a tough sell and I don’t know if we’ll get it done,” he said.

Why the tough sell?

“I think it’s a forgone conclusion that Americans just do not like to be told what to do and what not to do,” Baudhuin said. “That being said, when the Wisconsin DNR said you must harvest an antlerless deer before you’re eligible to harvest a buck, that was distasteful to a lot of people. Carry that a step further to the fact that there is a high percentage of the public, and specifically deer hunters, that don’t understand that we need the hunters to do what needs to be done with regard to deer management. There really are no other options. The population needs to be managed.”

In last year’s hunt across all different hunting seasons, Baudhuin said 1½ antlerless deer were taken for every buck.

“To make any kind of an impact, in my opinion, we have to be higher than 2½ antlerless for every buck harvested. It should probably be as high as three or more for every buck,” he said. “It’s not a nice thing to say, but at some point Mother Nature may step in here and give us a real honest-to-god winter and it will be devastating in some areas because of the lack of feed. There just is not enough natural feed in the forest to sustain the population.”