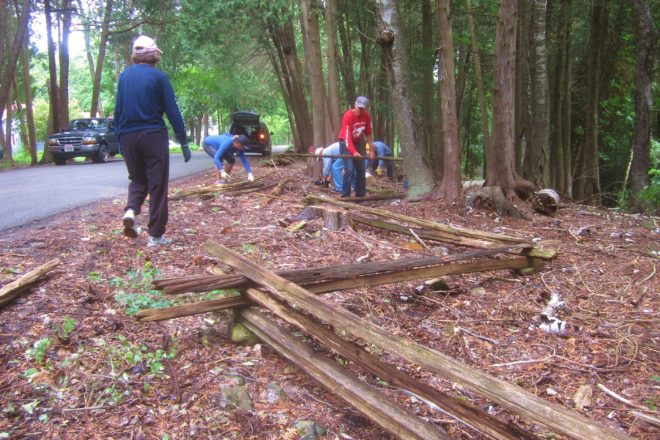 A group of volunteers rebuild the split rail fences along Moravia Street. Photos by Tad Dukehart.

If you are in need of a lift of spirits, take a drive on a summer day through the sun-dappled Moravia Road in Ephraim, where a group of volunteers has cleaned up brush and dead trees and restored most of a split rail fence that was erected about mid-20th century.

Ephraim resident Jim Reeve said his father and some of his friends built the fence about 65 or so years ago.

“This is one of the things I remember as a kid coming up. That road was, as some people say, the pretty road,” Reeve said. “I remember distinctly those rails came from a farm in Kewaunee. My dad had a friend who was county agent there. In those days, farmers were happy to get rid of them. They put them in a truck, brought them up there and established a fence.”

But the fence eventually became the victim of time, snowplows and other change agents.

“Over the years it was neglected,” Reeve said. “It’s on the village right of way. In my naivety, I thought I could get the village to step up and clean up. I learned, yes but no. There are things they’ll do, but that was one they wouldn’t do.” 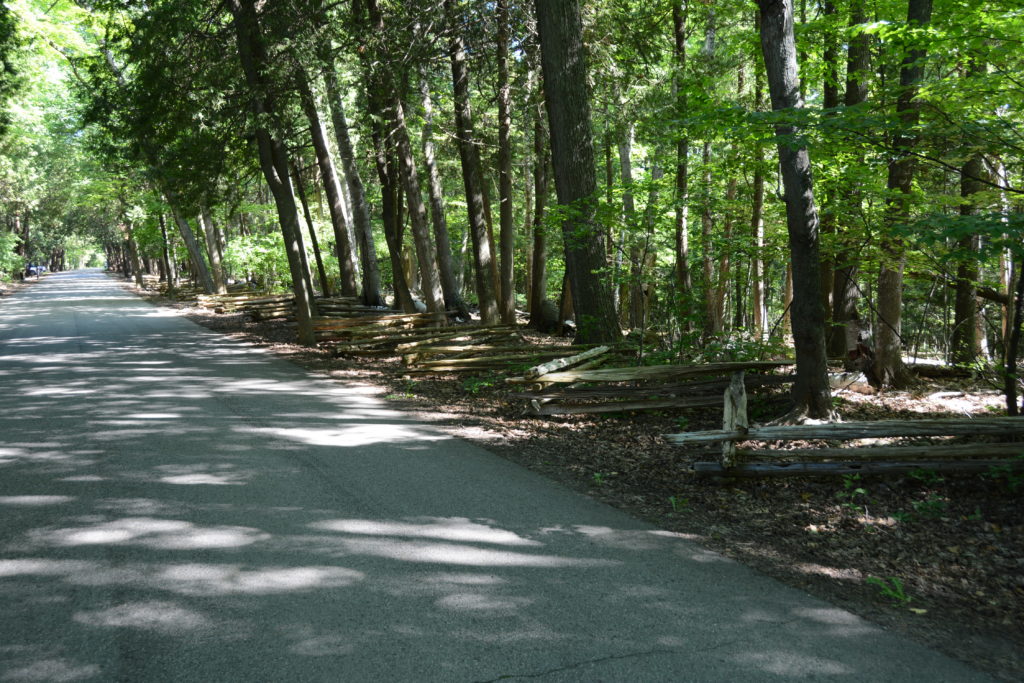 So Reeve contacted property owners on both sides of the street to let them know that he would be seeking volunteers to clean up the road and restore the split rail fence. Then, because the Door County Land Trust Ephraim Preserve borders on Moravia Street, Reeve contacted then-Executive Director Dan Burke.

“I convinced him this was a project we could do and I wanted his group’s support,” he said.

Last year a work day was held with the land trust cleaning up its property and volunteers from the Ephraim Men’s Club and the Ephraim Historical Foundation doing the rest of the brush and tree limb cleanup.

“We were left with 40 dead trees, things us amateurs couldn’t do,” Reeve said. “Townline (Timber Services of Sister Bay) gave us a good quote. I asked for people to contribute and we were able to have those 40 dead trees removed.”

Now the clean-up of the road is complete, but Reeve said another 80 to 90 rails are needed to complete the fence.

“I know there are some around. The question is, will people want to donate them?” he said. “I like to think there are people who would. I like to think one way or the other, we can finish it off. It was a pleasure walking back and looking at what we accomplished. It’s something. I know I’m proud of, having the village look better because of our efforts.”

Reeve also points out that he did not lead this effort in honor of his father.

“I wasn’t doing it as a tribute to my dad,” he said. “I just feel, I really like Ephraim. It’s my 77th summer in Ephraim. I want to give back. With the power of the internet and emailing people, we had many helpers in re-establishing the fence. Satisfying, I guess is the way I would say. And I’ve had lots of positive comments. I’m pleased people noticed. What I hope happens as a result of this, other people with property on the road can take some pride and say, ‘We can make this better.’”

Anyone who would like to donate rails to finish the Moravia Street split rail fence can contact Reeve at 920.854.4287 or via email at [email protected].